LEAGUE PLAYER RATINGS FOR ALL 34 PLAYERS
Click for an easy to print A4 pdf file.

GAME HIGHLIGHTS
What This Result Means:

Roosters have guaranteed themselves a Home Elimination Final at the SFS in Week Two. If the Dragons beat the Sea Eagles - the Roosters will play the Panthers at the SFS on Saturday Night September 18.

Tigers need the Dragons to beat the Sea Eagles in order to survive in the competition. Should the Dragons win - the Tigers will travel to Canberra on Friday Night September 17 to play the Raiders.
@NRLTweet Game Recap: 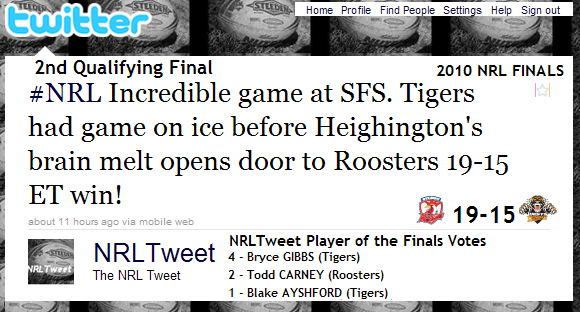 Please Note: The NRL Tweet Player of the Finals Award are provisional - this is the classic Voting System from the Regular Season - to determine the Player of the Finals their Individual Game Rating out of 10 will be heavily factored in.Full Player Ratings for Roosters v Tigers Here.