2010 NRL Finals: Uralla Tigers gear up for their toughest test...

2010 NRL Finals
Uralla Tigers step up to the Big Time!

The small New England town of Uralla in Northern NSW (south of Armidale) is gearing up for their biggest ever challenge this Friday Night...

Their very own Uralla Tigers are taking on the Canberra Raiders in an Elimination Semi Final!

Well we wouldn't report it if it couldn't be true.

The story was subsequently picked up in Tuesday's edition of the Sydney Morning Herald in the 'Inside Back' column.

In fact check out this graphic overlay on Channel Nine's coverage of the Dragons v Manly Qualifying Final on September 12.

Image courtesy of @NRLTweet follower @fabs_e who kindly uploaded a screen shot after we saw it on the telecast live but couldn't grab a screen shot for ourselves. Proving once again the power of Twitter to connect with people with immediacy... outside of a phone of course! 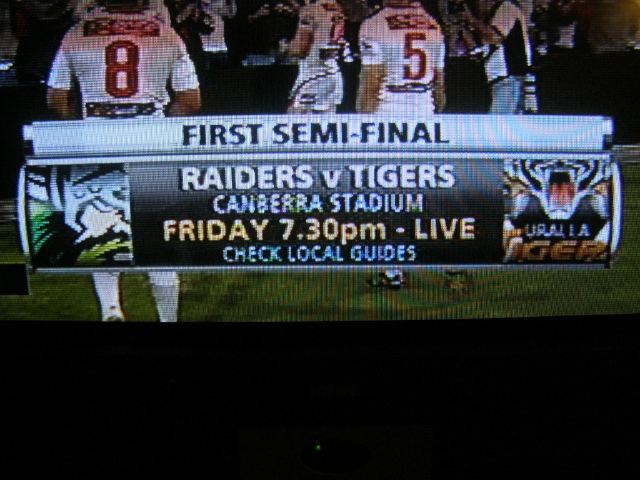 There it is - clear as day - the Canberra Raiders will play the Uralla Tigers at Canberra Stadium this Friday Night September 17 from 7:30pm on Channel Nine.

It is a slightly large stuff-up by the Channel Nine Graphics Department.

For one you'd imagine that being the official broadcaster you would have NRL delivered official logos on file... and would not need to go to google.com for your logos and somehow end up with the Uralla Tigers logo instead of the Wests Tigers one.

The differences are not exactly that subtle to be honest... somehow the 'Wests' part has been missed as a pre-requisite when the google search got underway.
One suggestion on Twitter was that the 'error' was part of a bet amongst the Graphics Department... that wouldn't be a shock but it is slightly unprofessional... even if those involved are currently chuffed with themselves that someone noticed.
We first asked the question if anyone had a screen shot at 6pm Sunday Night. 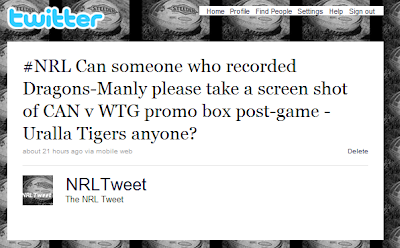 When @fabs_e came through with the goods we reposted it at 9pm. 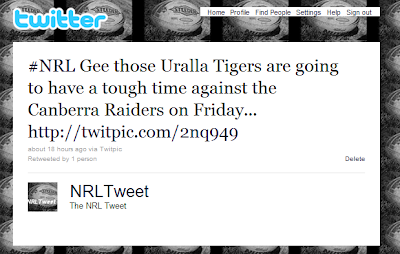 There is a sadder aspect to this stuff up and that is after doing some research it appears the Uralla Tigers had to pull out of Group 19 in the middle of 2010 due to player number shortage and support for the team. They are planning on joining the reserves of another group in 2011.
They also have a women's team called the Uralla Pussies.
Good luck to the Uralla Tigers & Pussies in their quest to survive in Country Rugby League.
Oh and good luck against the Raiders on Friday Night!

The grab in the Sydney Morning Herald on Tuesday September 14 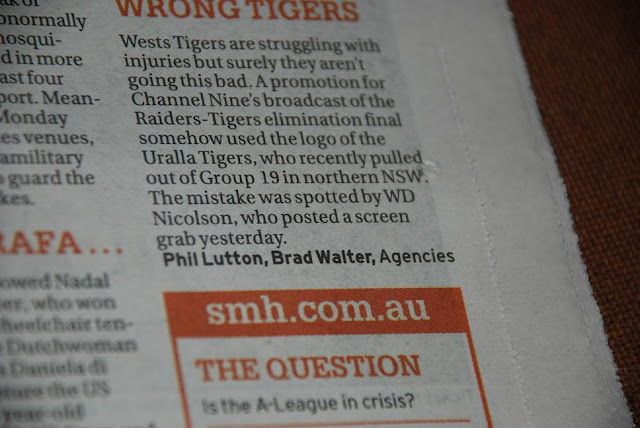