Roosters to face Dragons in 2010 Decider...
And then there were two... after one good and one great Preliminary Final - last year's Wooden Spooners will meet the back-to-back Minor Premiers in the 2010 NRL Grand Final at ANZ Stadium next Sunday at 5pm. 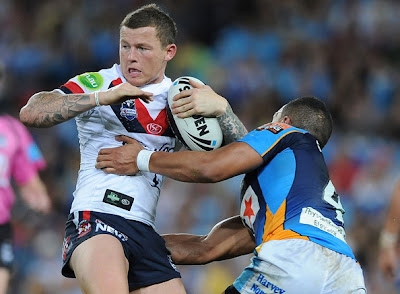 In Brisbane, the Titans have blown another opportunity in September after failing to back their talent against a Roosters side that did just that - the final scoreline of 32-6 was not so much an indication of the difference in talent between the two teams, rather the USE of the talent on offer. In the end the team that was willing to play football above percentages - the Roosters - emerged with a comprehensive 32-6 win. The Roosters have the best playmaking trio in the competition in Todd Carney, Braith Anasta & Mitchell Pearce and Coach Brian Smith is letting them play like few coaches in the NRL are willing to do.
In Sydney 71,000 fans witnessed a great semi final with the Dragons getting back into a Grand Final for the first time since 1999 with a 13-12 victory over the Wests Tigers. Sadly there was one non-call by the officials that will haunt the Tigers this off-season when St.George-Illawarra forward Jeremy Smith led with his knees attempting to 'tackle' Lote Tuqiri... this left the Tigers winger in serious pain and despite numerous replays showing conclusive evidence that Smith had made no attempt to tackle Tuqiri with anything other than his cocked knees... the officials failed to act when the importance of the game demanded that they show some backbone.

They didn't and from the next play Benji Marshall (who may have been taking a shot at penalty goal from 40m out) hoofed his clearing kick out on the full and from the next set Jamie Soward fired the Dragons into the Grand Final with a quality field goal from 35m out.

What made the call so crucial was the fact that the non-call with 8 minutes left essentially ended the Tigers chances of scoring again before the end of regulation but more importantly - offered the Dragons their first chance at a field goal - which Soward was good enough to take.

Make no mistake - this is not a suggestion that the Dragons didn't deserve to win the game or that they wouldn't have won the game anyway - but the non-call definitely denied the Tigers their chance at winning the game. 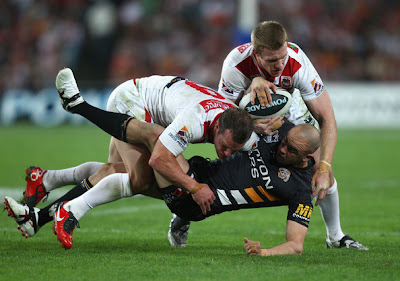 The huge crowd was treated to a brilliant semi final... again soured by a terrible display by the officials who would have been forced into an 8 point try scenario had Smith's knees been inflicted when Tuqiri was in the act of scoring a try...

So next Sunday - the Roosters who have played the best pure football this year (yes better than the Tigers) will take on the Dragons - a team who deny the opposition that chance of playing football better than anyone else - in the 2010 Decider.