What This Result Means:

Dragons move into Week Three with the victory and will host a Preliminary Final at either the SFS or ANZ Stadium on Saturday Week against either the Canberra Raiders or Wests Tigers.

Sea Eagles are finished for 2010 despite a gallant effort. They were the 8th seed and had to beat the Dragons to stay in the 2010 Premiership race.
@NRLTweet Game Recap: 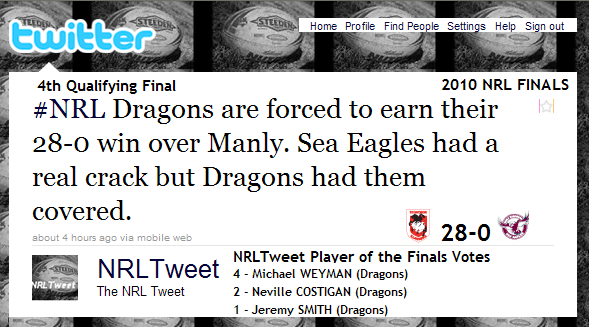 Please Note: The NRL Tweet Player of the Finals Award are provisional - this is the classic Voting System from the Regular Season - to determine the Player of the Finals their Individual Game Rating out of 10 will be heavily factored in.
Full Player Ratings for Dragons v Sea Eagles here.