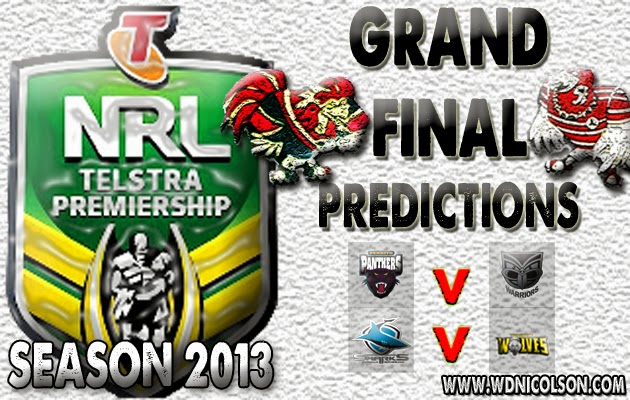 Forget about picking a winner... pick out the splinters!
| GRAND FINAL TEAM ANALYSIS |

Are we about to get the best Grand Final since the mid-2000s?

It's certainly a chance with the Roosters v Manly matchup about as tasty as footy gets this year.

While Melbourne and South Sydney had claims to play in the decider - they ultimately fell short and Newcastle's Cinderella run came up short, leaving us with two teams that play some real footy in Manly and the Chooks.

Click on the links below to see how we saw both teams before the season began... it makes for interesting reading given what we said, not where we had the teams finishing on the regular season ladder.

Having already appeared on Queensland Radio this morning to give my take on the game, I am now sitting down in a local cafe to break down my break down into a few hundred words of Grand Final Preview Gravy... sit back, enjoy and try to meet me halfway on the plane of Grand Final analysis.

Because before you read another paragraph, know that I was unable to settle on my favourite up until I literally went on air at 8:05am Thursday morning - so even are these two teams in my mind.

Translation: We might get a cracking Grand Final - the most evenly contested since Melbourne and Brisbane in 2006 and perhaps the most gripping since Parra pushed the Storm in 2009.


Subscribe to the NOT The Footy Show Podcast on iTunes

You can track Grand Final Votes for #NRLTweetPlayerofFinals and Voting Allocation is below (5 Voters for the Grand Final - all using 4-2-1 Votes) - with the chance of the Clive Churchill Medallist (as chosen by our voters) still a chance of taking out the entire playoff series gong - if he can grab all 20 votes.

Latest of Late Mail and Grand Finals Tips below!

For our analysis of Tuesday team selections for the Grand Final - click here.

Pre-Season Chat... 2013 EASTS PREDICTION
| PLAYOFF CHANCES: Stay fit and start well - they'll play in September.
| The starting backline has weapons deluxe, but the end of season fortunes of the team come down to SBW's impact and health, as well as how consistent the holdovers are from 2012 - especially in regards to their defence. Talent isn't lacking, application is the question mark... and if they start badly and SBW isn't fit... okay Roosters fans - we won't go there.

@NRLTweet's PREDICTED REGULAR SEASON FINISH: Roosters 10th
| Given the talent that has been assembled this squad should play in September, but you don't win games on paper. |

Pre-Season Chat... 2013 MANLY PREDICTION
| PLAYOFF CHANCES: Better than average...
| But how much did the preliminary final drubbing at the hands of the Storm drive Manly's off-season? The Sea Eagles have to start the year minus two thirds of their starting backrow (and maybe the whole lot if Watmough isn't fit) - a group that has been integral to how Manly play for years... But starting halves Daly Cherry-Evans and Kieran Foran are fit to open the season and they are as good if not better than every other 6/7 combo in the NRL - they'll keep Manly in the playoff race by themselves if they have to.

@NRLTweet's PREDICTED REGULAR SEASON FINISH: Manly 7th
| Not the slam dunk contender of recent seasons but they've still got the pieces to be dangerous at the pointy end of the year. On their day/night they can beat anyone and it will be intriguing to see if Toovey changes things up a little more in his second season. Their table prediction isn't a reflection of how we rate their premiership chances - they can still win it. |
So while we liked both teams as September calibre squads, our regular season predicted finishes were a little off...

Now for our Grand Final Chat...
@NRLTweet's PREDICTION:
Many times this season you would have sat down and looked at two teams that appear evenly matched and decide on your pick considering the following factors:

Which team has the best Spine?
If like me, you believe that being able to create points it the greatest asset a team's spine has going for it in big games - you'll need to sport some serious weapons in the #1, #6, #7 and #9 jerseys and ladies and gents... Manly have the edge here.
Not by a lot mind you, but come fulltime (or golden point fulltime) on Sunday night - the Brett Stewart/Kieran Foran/Daly Cherry-Evans/Matt Ballin combo gets my backing against the Anthony Minichiello/James Maloney/Mitchell Pearce/Jake Friend mix.
I'll always take a ball playing playmaker over one that relies on the kick... and Foran might be the best of the lot. That being said I think Maloney is playing out of his skin at the moment, but Foran and DCE get my vote over Maloney and Pearce, Ballin and Friend cancel each other out (both do their jobs superbly), while I'll take Brett Stewart's big play ability over Minichiello's any day of the week... but I might lean towards Mini on the reliable hamstrings front.

Which team has the best Strikeweapons?
Michael Jennings was the standout three-quarter in the Preliminary Finals. He'll turn a half chance into points and his combo with Maloney is the trump card the Chooks have vs Jamie Lyon's side of the field. Then there's the quality on Easts' wings - with Daniel Tupou and Roger Tuivasa-Sheck far better in the air than the David Williams/Jorge Taufua pair and exposing this must be at least attempted by the Chooks. Shaun Kenny-Dowall will either be brilliant or a passenger and in the pack the Chooks have more potency in terms of breaking tackles than Manly's forwards.
But Manly have the best strikeweapons all up - Taufua is a beast if he ever gets the ball from Steve Matai (who is Manly's SKD equivalent - great or a liability), while we all know Lyon and Williams can make beautiful music together. Then there's Brett Stewart who can turn half chances into points better than almost anyone...
Then there's SBW... he's a freak, but I still JUST lean towards Manly because their playmakers are better at creating half chances for their strikeweapons. But it is close.

Which team has the best Pack?
It's the Roosters and it might be a more pronounced advantage if Boyd Cordner and Luke O'Donnell replace Dylan Napa and Isaac Liu come gameday. Manly's group is mighty good but it isn't as dominant - and the ability of Anthony Watmough to play 80 minutes with a bung knee makes it tough for him to match what SBW can bring to the table. Glenn Stewart will play the creative role but SBW v Justin Horo is matchup I love if I'm the Roosters because as good as Horo has been - he's looked tired in the last few weeks and SBW is going to test him deluxe on Sunday. And depth wise the interchangeable Mitchell Aubusson, Frank-Paul Nuuausala, Aidan Guerra and probably Boyd Cordner - the Roosters just look better equipped for a war of attrition between the backrows.
Manly's starting props are good enough with Brenton Lawrence and Brent Kite and their backup is solid with converted backrower Jamie Buhrer and George Rose playing very well lately. But the Roosters counter with Jared Waerea-Hargreaves in career best form, Sam Moa simply doing his job and then either O'Donnell and Liu/Napa will come on for their stint and do what their coach asks of them - keep the momentum going that the starters have produced.
That's the big edge for the Roosters - bar a few games late in the season - their bench props have been sensational and though Rose and Buhrer did a great job in recent weeks - you have to lean Roosters to win the middle of the field battle. That said...

Which team has the best Tactics?
Here is where Manly can beat the Chooks... and Easts can expose Manly.
Biggest problem for Manly in these clashes against the Roosters has been taking their chances - they've scored 4, 12 and 0 points in their 3 games this season but have had PLENTY of chances and field position in all 3 games. But the simple fact is - they lost all 3 games and didn't take their chances. So the Manly plan will be hold the Chooks as much as they can in the middle, give Lyon and Matai early ball and TAKE THEIR CHANCES.
The Roosters will roll with the same approach to their game all year - use their roll through the middle off the back of Jake Friend's judgement and give Maloney and Pearce the green light to make a quick decision on which play to run off a fast play the ball. Throw in plenty of ball to SBW and defend like you care more than the other team and the game plan has delivered a Minor Premiership and a Grand Final appearance...
If I had the coaching hat on for both teams these would be key parts of the game plan I'd add/change:
My Game Plan For Easts - make Matt Ballin tackle, tackle, tackle... he's a machine but he's also the key to Foran and DCE getting clean crisp ball time after time, make him work work work and Manly will find it hard to be as clinical in possession if their physical freak starts to break down from fatigue at the end of each half. Get SBW the ball as much as he wants it and then some... kick, kick and kick to expose Williams/Taufua in the air.
My Game Plan for Manly - as Newcastle planned last week, TARGET Maloney/Jennings and Pearce/Kenny-Dowall on the edge and get ready for the missed tackle induced opportunity. Foran in particular has a huge role to expose the Pearce/SKD combo outside SBW. Oh... and take your chances.

Just pick a winner already...
Okay... go with Manly. This could go to Extra Time but I think Manly might have to remember how to kick a field goal to win this. I'll be barracking for the Chooks (hey - it's Manly!) but Manly to win as they take their chances to overcome the 1st try to Tupou (and then watch the Chooks not kick for him again - a tactic teams seem to adopt for some inconceivable reason when a big play works) and lead 10-4 at halftime. The Chooks score to tie things up with 10 minutes left but in Extra Time or regulation - a DCE field goal decides the game.

Sea Eagles by 1 point | MANLY 17-16
1st Tryscorer: Daniel Tupou, Roosters
Clive Churchill Medallist: Daly Cherry-Evans (will get it for the match-winning field goal, though I think Kieran Foran will be the best player on the field).

LATEST OF LATE MAIL:
Easts - To come... sounds like Cordner and O'Donnell are every chance. Liu and Napa would likely miss out.
Manly - To come... Hiku on the bench for Gower seems to make some sense if Gower is going to barely play any minutes anyway. Galuvao is not playing.
PRE-GAME UPDATE: To come Sunday 6pm.


NYC Panthers v Warriors: I really like the Panthers in the Holden Cup - they defend (unlike most other NYC teams) and the Warriors are flaky... go the Panthers 13+.
NSW Cup Cronulla v Windsor: In NSW Cup the Sharks have been a class above everyone else and while Windsor have plenty of NRL talent on show - Cronulla should win as they have plenty of their own and it has been playing together for longer this season. Sharks 1-12.

What are your tips for the Grand Final?

Did you read our 2013 Season Preview?
Time to find out how we ended up?
Click a Logo for how we saw your team's chances in the pre-season: