Maria and Waz offer their thoughts on the last game of the season as we salute the Chooks as the best of the best in 2013.

Who stepped up to win the game? Feeling in the sheds post-game? The best Grand Final since? And was DCE unlucky to get the Clive Churchill rather than undeserving? 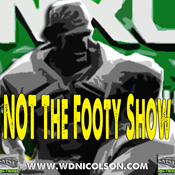 NOT The Footy Show Episode 145
'Roosters 26 Manly 18 Grand Final Review Podcast' - Released Monday October 7, 2013
Right Click Save Target As This Link if you don't have iTunes for the MP3 File
Subscribe to the Podcast here

Plus the outstanding cameo from James Maloney's kid on the presentation stage!

Enjoy the last NRL instalment of NOT The Footy Show's Finals cameo - we might have a Rugby League World Cup Show or two... but can't promise anything kids.

Thanks for listening - now please rate us on iTunes and tell people about the show!