6TH COMPLETE SET: Test Footy can't get no respect, Farah's the better man, City-Country IS important plus plenty more...
Round 6 News and Views and @NRLTweet Player of the Year Votes

By W D Nicolson - April 15, 2013
Follow @NRLTweet
This is a new feature on www.wdnicolson.com - every week we will post a Set of 6 Tackles that form a Complete Set by the end of the Round. It also features Votes from Round 6 of The @NRLTweet Player of the Year Awards. Let us know what you think @NRLTweet

Everyone had been calling for a stand-alone rep weekend for years (and ideally stand-alone Origin but that's never going to happen) but it has only taken two years of the weekend to be in place before NRL clubs have begun to use it to their advantage.

With no NRL action this coming weekend, a few clubs are taking this opportunity of basically a two week break between matches to rest up key players and thus - they have withdrawn the likes of Mitchell Pearce, Robbie Farah, Aaron Woods, Jarryd Hayne and Sonny Bill Williams from contention for various rep sides this weekend.

But note the lack of Australian players on this list - proving maybe that the mid-year Test does carry a lot of weight that most end of year Tests do not. This is a great sign for Australian Rugby League because they are not the current World Cup holders and getting things right in this Test helps them set up for a genuine assault on reclaiming the trophy at the end of the year.

@NRLTweet Player of the Year - Round 6
Votes from Round 6 are below.

I do however understand why clubs would encourage their star players to take a couple of weeks off, especially if those same star players are going to play State of Origin in a month or two.

But Sonny Bill Williams won't be playing Origin... so really it is his withdrawal that is the most disappointing. Understandable yes, but still disappointing.

His knee might be sore but it's hard to believe he wouldn't be playing this weekend if the Roosters were.

To the teams for Friday's Test in Canberra - kick-off at 8pm.

Quick Tip: Australia are about 12 point favourites... which might be unders given the form of their key players after six rounds of the NRL. If SBW was playing for NZ I reckon he's worth a try to them, but no more.

Do you think clubs are being smart or disrespectful to the rep weekend?
Please comment below or reply on Twitter.

The rest of the Round 6 Set of Six is below - right here on www.wdnicolson.com

6TH COMPLETE SET:
Round 6 - Six points that emerged from a four day footy week.
A tip of the hat to the SMH's 'Set of 6' and Andy Wilson's 'Set of 6' for the name, as Complete Set just doesn't roll off the tongue quite as well, and we'll call it flattery that you've already used it.
CURRENT NRL LADDER

FIRST TACKLE - Jamie Soward is fortunate Robbie Farah is a better man.
I don't really want to repeat what was said by Soward at the SCG to Farah on the field but I will report he did apologise and you should just read the rest of Glenn Jackson's story and make up your own mind.

SECOND TACKLE - City Country has a place - don't listen to the naysayers, listen to the people
If you want to know why City v Country has a place on the Rugby League schedule - ask the people from the NSW Country town that hosts it every year and you'll know why.
A couple of years ago I spoke with the publican of an Albury hotel in the week leading up to the match and he could not speak any higher of the impact that simply knowing the game would be played in Albury had on the town and its surrounds.
Those who talk of scrapping it every year have no idea of what football means outside of their Sydney-centric minds - and I sincerely hope it remains on the schedule for many many many years to come.
Having said that - the two week break that NRL clubs will take advantage of where they can - means that there are a host of stars not playing in this clash... but that is OKAY.
Give the youngsters a run, or the journeyman who has never played rep foot before... and maybe even Reece Robinson.
Oh wait - he missed out, and best as anyone can tell that's simply because no one in the City camp knew he was eligible... otherwise how can you explain him missing out to Joel Reddy and James Tedesco when Jarryd Hayne and Chris Lawrence withdrew.
Update: The NSWRL was kind enough to explain Robinson was deemed injured when they asked the Raiders if he could replace Hayne.
Casualties from named teams: Jarryd Hayne, Chris Lawrence, Aaron Woods, Robbie Farah, Josh Reynolds (CITY), None (COUNTRY).

THIRD TACKLE - Can the Bulldogs find their way out of a 1-5 start?
They've had a tough opening - Cowboys, Eels, Storm, Rabbitohs, Sea Eagles and Roosters... but they've still only won one game... against the bunnies of that group - the Eels.
Minor Premiers last year and current Wooden Spooners, Des Hasler has a job ahead of him.
But the thing that strikes you about how the Dogs are playing is how they are trying to play exactly like last year in attack... that is the forwards roll off Michael Ennis for a tackle or two, then those same forwards take the ball to the line and sweep it out the back to Josh Reynolds or Ben Barba.
Thing is - that style works with Sam Kasiano and James Graham in the team, right now Greg Eastwood is the only forward who can really execute that skill .. Aiden Tolman, Martin Taupau, Dale Finucane, David Klemmer and Tim Browne are go-forward men, they don't have that skill - yet the game plan seems to be asking them to be Kasiano/Graham while they are absent.
Factor in a very rusty Barba and a slightly overwhelmed with the weight of being the lone playmaker on the team in Josh Reynolds (with Barba out) and it is any wonder the bulldogs haven't scored more than 20 points in six games?
It's has to be a worry for Hasler, because if his strike weapons don't get ball with decent room to move - the Dogs look about as useful in attack as they did last Friday night when scored zero points.
After the Rep Weekend - the Dogs have the Sharks in Gosford, the injury riddled Tigers at home, the very average Warriors in Wellington and then get the Knights in Newcastle.
In today's NRL you can make the finals with just two decent months of football... for the Bulldogs one of those decent months has to start on April 28 or at absolute worst - May 3.
Does Hasler need to re-invent the wheel to get the Dogs back in the running?

FOURTH TACKLE - Quotable Quotes from Round 6 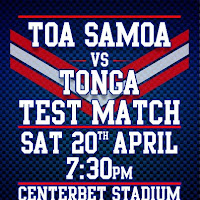 While the Rep Weekend has allowed clubs to rest players (which wasn't the reason it was brought in), a number of NRL players and NYC stars will be running around on Saturday in another Test Match and the NYC Origin clash.
Penrith have got behind the junior fixture and hosted the first one last year, now they have added a Samoa v Tonga Test match featuring a good assortment of talent from the NRL.
Given this is a World Cup year - players are being forced to choose which team they really want to be a part of (or know they will get picked for) and by the look of the two teams - it should be an entertaining Test.
Plus it's cheap: $15 for adults, $10 for concessions and $5 for kids.
Here is our best guess at the starting lineups from the named squads for the 7:45pm game.
SAMOA (Actual 19): M Wright, K Fai-Fai Loa, A Winterstein, J Sa'u, D Vidot, C Tuimavave, B Roberts, J Lima, M Iosefa, R Asotasi, E Pettybourne, S Tagataese, L Tasi. Bench: L Ah Mau, M Taupau, M Taufua, A Elisala, T Pasene, L Saofaiga. Coach: Steve Price.
TONGA (Actual 21): G Fisiiahi, M Oldfield, M Fonua, S Likiliki, E Uaisele, S Langi, D Foster, B Kite, P Politoni, S Moa, S Manu, J Taumalolo, A Tupou. Bench: N Seluini, FF MoiMoi, R Fa'aoso, B Murdoch-Masila, D Hala, S Havili, S Havea, A Vea. Coach: Charles Tonga.
The NYC Origin teams can be found here - because finding anything current on the Holden Cup on NRL.com is a near impossibility.

Do it... do it now.
SMH reporter Phil Lutton has kindly transcribed it all for you here.
But the quote that stood out to me wasn't asking that the referees be accountable and face the media or the swearing etc... it was this quote:
"There were probably seven penalties there and probably more that we could have been penalised for," Stuart admitted. "I'm not blowing up about that. But there's now way they were that clean."
That's the clincher for mine and why in some ways I don't think what Stuart said was really that bad.
It was him letting off steam stemming from frustration but even he admits that his team is doing the wrong thing on the field time and time and time again...
His beef is that if the Eels are repeat offenders every week - why aren't his opposition?
Which really - is a fair point.
Albeit a point that'll cost him $10,000 and may be skimmed over in the final wash-up from the 7 minute presser.
Cheers,

@NRLTweet Player of the Year Award
Round 6 Votes

This is how the votes were handed out for Round 6.