MAL MENINGA'S RECORD DAY
Finally, here is proof of his 5 try and 9 goal bonanza in 1990. 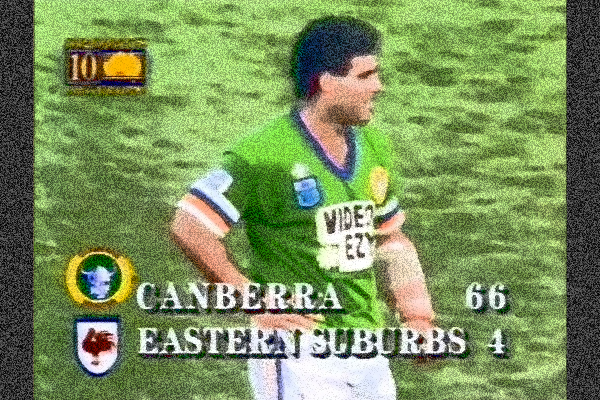 Here are all 38 points by Big Mal, including a couple of special tries scored by others on the day.

Meninga was an irresistible force that afternoon but the commentators still wanted to give fullback Gary Belcher Man of the Match despite Big Mal's 5 tries and 38 points!

But the big bonus in this video is John 'Chicka' Ferguson streaking down the field to set up a very young Laurie Daley... notice how Daley - some 15 years Ferguson's junior - struggles to keep up with the best pure winger I've ever seen play.

If you'd like to see www.wdnicolson.com put other big performances through the editing process - let us know what game and where that game can be found and we'll do the hard yards, because celebrating the true genius of yesteryear is hugely important in educating footy fans who think that today's stars are the be all and end all. That's certainly NOT the case kids!

So how do you rate Big Mal's 38 point bonanza? How about Fatty Vautin's defence? Share your memories.
Let us know by commenting below or replying on Twitter.