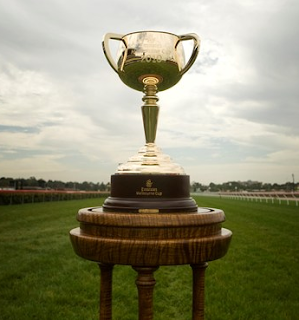 Welcome to the 5th Annual 'Bluffer's Guide to the Melbourne Cup'.

It has become a bit of a novelty here at www.wdnicolson.com every November, as we take a quick look at the huge field for the 3,200m race at Flemington and judge the horses in the race based on the quality of their name as much as anything.

But you aren't here for the punting tips, you're here to see if for the 5th straight year I can come up with some moderately interesting lines pertaining to the competing horses in the 2012 Melbourne Cup field.


As we stress here on www.wdnicolson.com every year, think long and hard about what you could spend (or save) the excessive money you punt with on Melbourne Cup day... in short, don't be an idiot.

Anyhoo, to the Bluffer's Guide for another year and each horse has its current Sportingbet prices (as of 5/11/12) listed next to the horse's name and then you can read the Scouting Report.

Now all horses are listed in the barrier draw... 1 through 24, actual racing number is next to the name.
(Those horses listed below the field were scouted prior to the final field being culled)

BLUFFER'S GUIDE TO THE 2012 MELBOURNE CUP

MY QUEST FOR PEACE #17 @ $19
A Noble name for this stallion... Roger Wilco would also be proud if it finds some space.

SANAGAS #9 @ $51
Should sandwich itself amongst the field somewhere...

KELINNI #24 @ $19
Is it just me or does this horse sound like a Scandavian white-goods company?

GALILEOS CHOICE #12 @ $16
Funnily enough this horse does not have astronomical odds to win... shame.

JAKKALBERRY #3 @ $51
One of the million flavour options at Boost Juice I believe...

Ok that's the horses taken care of... now to the actual predictions.

So after that mishmash of referential wit, what are your Melbourne Cup selections?
Comment below or tweet me @wdnicolson
By W D Nicolson