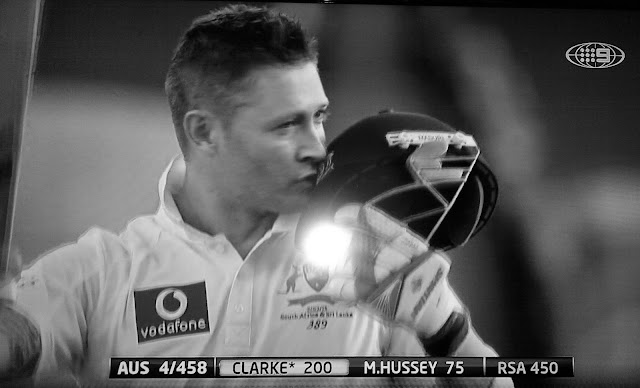 Australia's dominance with the bat finally ended in the first session of Day 5, as Michael Clarke decided to give his bowlers a chance to inflict either some mental scars on the South Africans in the final two and a bit sessions... or maybe press for a famous victory.
Clarke's 259* was awesome and Hussey's even 100 off just 125 balls showed that he remains at the top of his game as well. The pair backed up Ed Cowan's 259 run stand with Clarke with another 228 run partnership in just 45 overs to take the game away from the visitors and give Australia the only hope of getting a result from the match.
Though Australia got Alviro Petersen early, and actually took wickets regularly as Day 5 stretched on, their 1st innings lead was (as expected) about 50 runs short of making sure that the game was interesting entering the final hour of play. In the end AB de Villiers steadied the ship and ate up over 100 deliveries as South African negotiated a draw with the final hour of play remaining.

Clarke takes top honours for his 259* in 538 minutes off 398 balls, while Cowan's 136 and Hussey's 100 set about taking down the best bowling attack in world cricket who had reduced Australia to 3/49 chasing 450.
Jacques Kallis finished with 147 and 49 in his two innings, doing it easy for the most part, while Hashim Amla put together 104 and 38 - again looking like he had all the time in the world (particularly in the first innings). That being said Graeme Smith failed in both digs and South Africa need to find a replacement for JP Duminy after his freak injury after Day 1 in the warm-downs.

Australia must decide if having the working class nature of both Peter Siddle and Ben Hilfenhaus is enough to worry the SA top order, while Mitchell Starc simply has to destroy Victoria in the Shield match to make the Australian selectors seriously considering him for Adelaide.

South Africa owned Day 1 and 3, but it was all Australia from that point on... with the Aussies taking the edge from the Test itself.

But as we expected before the series began, whoever bats the best will win this Test - so if Shane Watson is fit for Adelaide the Australian top order must stand up and keep the SA attack at bay to give them a hope in the decider in Perth - where the SA attack will have a field day on that lively deck. 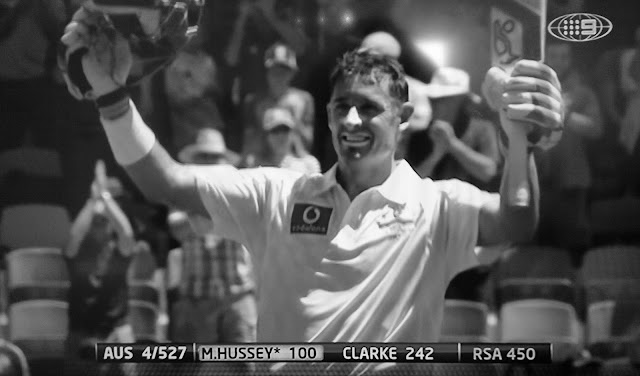 Well Richie Benaud delivered a sensational recap of Channel 9's 35 years covering Cricket prior to the start of the 1st Test between Australia and South Africa... but sadly not even his classy delivery could drown out the incessant 'buzzing' of Mark Nicholas.

But to the cricket - South Africa won the toss and batted, picking paceman Rory Kleinveldt over Imran Tahir after the spinner looked only so-so at the SCG against Australia A last week (for the record I watched him bowl 20+ overs on Day 1 - so I have some validity to the call).

Australia - quite rightly - went with Nathan Lyon over Mitchell Starc and although they will field first, Lyon's biggest role may come in dealing with the pure bowler heavy South African tail.

Plus - Lyon will definitely play in Adelaide for the 2nd Test, so not playing him now would have been a huge mistake. Had the 2nd Test been at the WACA (it is the 3rd and I think it will be the deciding Test) - then yeah, maybe you play Starc instead of Lyon.

Rob Quiney debuts for Australia and will bat at #3 - and having watched his innings against South Africa for Australia A in Sydney - I'm stoked with the decision. He's got something about him, a real presence at the crease. Forget if he's 30 - that's prime real estate for a batsman. 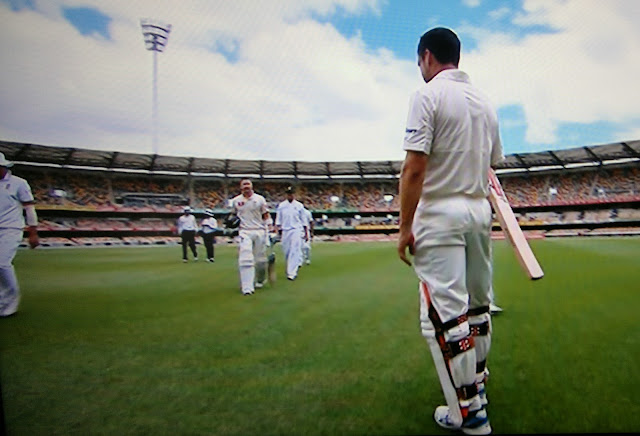 #Cricket Today's batting clinic at the Gabba is brought to you by @MClarke23 @eddiecowan & MEK Hussey. AUS 1/376 #ausvsa #enjoyeditthroughly

Australia lead by 37 runs with one day remaining.
Cowan (109*) brought up a fine maiden Test century with a pull shot after having to endure the lunch break on 98*, while Clarke has looked just as good on his way to 97* in the 2nd session.
The South African's haven't bowled badly, but like Australia on Day 1 - the batsmen look settled and the pitch is only offering assistance every so often.
Channel 9's Ian Healy would like to see Clarke declare around 100-150 runs behind and offer South Africa a chance to make a game of it... Ian Chappell counters with the steady as she goes way South Africa batted on much of Day 3 after losing all of Day 2 to rain.
My gut feel is Australia shouldn't ignore the chance to turn this game into a result but like I wrote this morning, still believe South Africa are the only team that can win it - sporting declaration or not.

Clarke (110*) joins Cowan (127*) in the hundred club after enduring a number of minutes on 98 and 99. He takes a single behind point and makes his 20th Test 100. It is his 6th Test century since September 2011...
Kallis and Smith are currently bowling... waiting for the 2nd new ball. Australia trail by 170 runs with 4 and a bit sessions left in the match.
Clarke (200*) brings up his 200 with a straight drive and Australia now have the lead... wow. Cowan departed for a superb 136, and Hussey just kept the foot down - racing to 75* - meaning Australia backed a 259 run partnership between Clarke and Cowan with a 150+ effort with Hussey.
The game will be a drawer but what a fight back from Australia on Day 4... and to think I wrote 4 hours ago that only South Africa could win the Test...

Australia got Amla early but then watched Kallis and de Villiers take the game away from them... until Pattinson removed both in quick succession and Australia had a sniff at holding SA to a score around 400... well the tail had other ideas and managed to get a bonus 50 runs and send Australia in...

First Warner, then an unlucky Quiney (caught on the boundary in freakish fashion by Steyn) and then duck-boy Ponting came and went, leaving Australia reeling at 3/40 after only 10 overs. 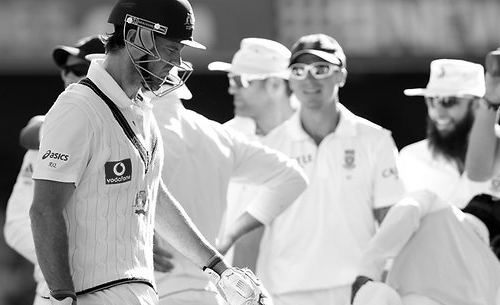 But Cowan and Clarke have steadied the ship... thing is, the way Australia started their run chase - this game only has two possible results: A South African victory or a draw.

Australia cannot win entering Day 4 as they trail by 339 and only 6 sessions remain in the game.
JP Duminy out for the summer or not... South Africa's batting lineup toyed with Australia's bowling attack.

And judging by yesterday... their bowling attack did the same with our top order... over to you Captain Clarke, Hurricane Hussey and Canny Cowan. 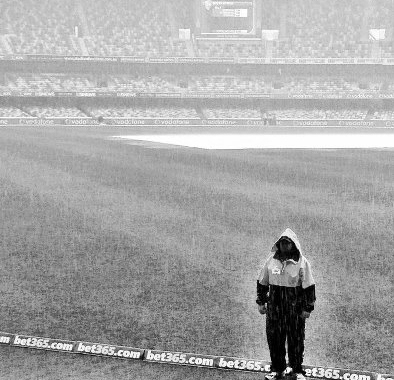 SOUTH AFRICA 2/255 - See scorecard below.
It was South Africa's day... 3 of their Top 4 batsmen got amongst the runs and both Hashim Amla (90*) and Jacques Kallis (76*) will continue to bat tomorrow.
Amla was the accumulator and Kallis at times imperious, as they built on the platform provided by Alviro Petersen's 64. Graeme Smith went early but before he did - looked untroubled by Australia's new ball attack (that being said they did pick him up LBW - dossier or not, always the way people think they can get Mr Big Pads).
Amla looks like he could bat for a fortnight and although Kallis was lucky to survive after a no-ball kept him at the crease after a loose shot - the pair have an unbroken partnership of 136. After stumps were called the Proteas were dealt their first real worry of the day with J-P Duminy rolling an ankle warming down on the field... he may not bat til Day 3... though Amla and Kallis may still be batting then.
South Africa will keep batting and 500+ is going to be the minimum they will be after given the start they had to the Series today. 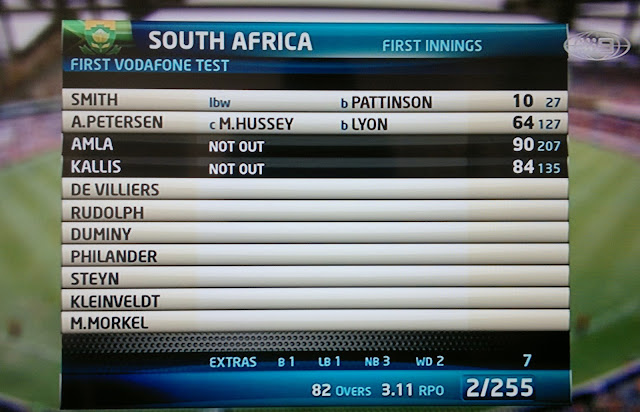 For Australia... well all the bowlers had their moments, but only James Pattinson (good and ordinary during the day) and Nathan Lyon (used early but not often enough) grabbed a wicket. Ben Hilfenhaus had Petersen when he was closer to 50 and no amount of technology can tell me that the ball didn't hit him in line with the stumps... still that was the decision.
Peter Siddle went oh so close to getting Kallis just as he was starting to look ominous - but a no-ball is a no-ball for a reason.
Michael Hussey and Rob Quiney bowled not terrible medium pace, but where was Michael Clarke for a couple of overs?
Big morning ahead for this fancied pace attack... in fact, Australia's chances of winning this Test hinge on the removal of both Amla and Kallis in the first session on Day 2. 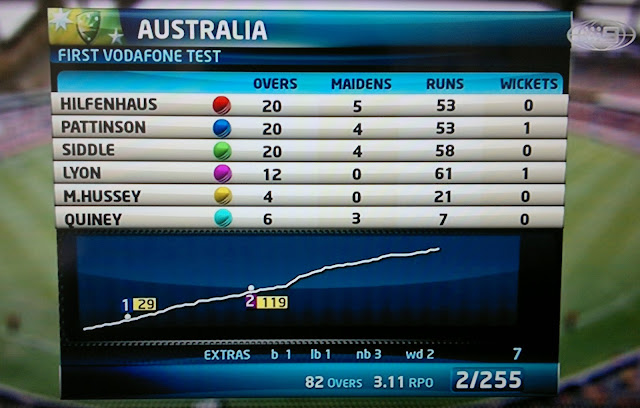 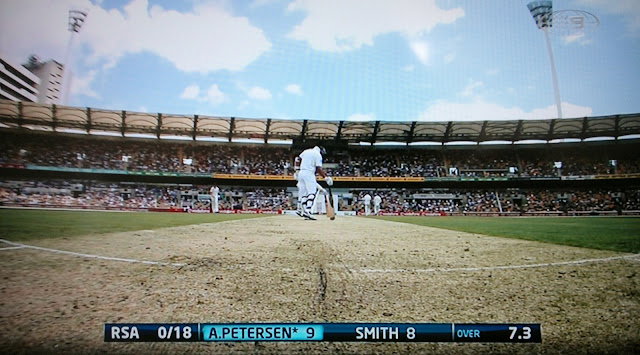 South Africa looking very solid early, Australia haven't bowled badly but they wasted a referral on a leg side caught behind appeal on Graeme Smith off Ben Hilfenhaus.
Smith survived an LBW appeal from James Pattinson but the video told a different story. Plumb, hit back leg and gornskies... of course Smith walked off shaking his head. Good hitback by Australia, as South Africa were looking untroubled in the first hour.
Nathan Lyon introduced early... and look there's some turn people, and some shortness but somewhat encouraging. Petersen looking untroubled by the quicks, Australia employ a leg slip for Amla as well.
Session goes to the Proteas for mine. Petersen has been doing it easy and Amla's highlight was taking Lyon down the ground after the Australian spinner started pitching it up and looking worrying.

Lyon gets Petersen to hole out to Hussey at mid-on for 64 and Australia stay within striking distance of South Africa. Mind you that brings Kallis to the crease and rumour is he might be able to bat a bit... Amla is such a quality player - scores runs without looking like he's trying that hard, just a master occupier.

Amla and Kallis have been stockpiling deluxe... Amla is 79* (was dropped by Siddle on a caught and bowled) and Kallis survived a very fortunate no-ball from Siddle after tea (he was caught off a leading edge by Lyon at mid-off) and has rqaced to 56*. South Africa will have 500+ on their minds now... Australia will be hoping for a middle order collapse and maybe limit the damage to around 400.

Rob Quiney is bowling again... Yes BOB!
Mind you nothing actually happened in the over I watched, but good to see him have a trundle. Wait til he bats though... but that might be a while, given then way Amla 85* and Kallis 69* are going.
ESPNCricInfo has your up to the minute scores right here

What do you think of the 1st Test Team v South Africa?

Will we see many changes as the series progresses?
Follow @AustCricket
Here is the rest of the 2012/2013 International Schedule for Australian Summer of Cricket
By W D Nicolson