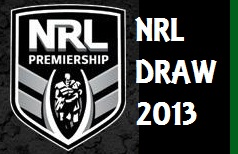 The countdown to the 2013 NRL Season is now well and truly underway with the release of Season Draw for next year.

www.wdnicolson.com has had a quick glance at the new draw and here are the main points of discussion coming out of it.

We knew certain parts of Round 1 before time (like SBW and the Roosters would play the Bunnies at the SFS), but this morning the NRL finally released the full 26 Round schedule - including the fixed kick-off times for the first 20 rounds.

GET THE FULL 2013 DRAW HERE IN PDF FORMAT

After the Round 1 Draw you can read my quick hit thoughts on the Draw (including the all important Free-to-Air quota) and I will add more about each team's draw as the day unfolds.

If you have a view on the draw or noticed a quirk in the schedule please comment below or reply on Twitter @NRLTweet and I'll make sure I respond.

Look it's not the best matchup they could've gone with - what's wrong with a Grand Final Replay straight off the bat? But if you consider how both games finished last year and as long as SBW is playing - it should draw 30,000+ to the SFS even on a Thursday.

Thank you very much for the ratings! Great matchup for TV and ground attendance. Kicks off Brisbane's Friday night dominance on FTA.

Parramatta officials will be hoping for a big turn out from the Warrior fans... this gets the dreaded 5:30pm timeslot and Parra need a undefeated pre-season to drag along a crowd over 15k.

ANZ should get over 20k as the Canterbury faithful turn up to thank their boys for their 2012 season... but this is no gimme. Imagine the crowd if JT has already signed with the Bulldogs for 2014 by the time this game starts?
SUNDAY - 2:00pm @ Centrebet Stadium, Penrith

Good time for Canberra's travelling fans and Penrith should draw a 15,000+ crowd here given the optimism that a new season brings. Each team will be thinking 'Round 1 win' when this draw hit their table.

Great to see Melbourne - as premiers - open the season at home and on FTA (though will Channel 9 show it live in Melbourne?). The Dragons aren't a 'sexy' matchup but they are a good one. First Sunday Arvo footy needed to have a reason to watch it - reigning premiers beat a token Knights, Eels or Panthers ratings grab.
SUNDAY - 6:30pm @ Toyota Stadium, Cronulla

Yes Cronulla recruited well but this is the dullest of the season openers. That being said it doesn't have to be that way if both teams play a more up-tempo game after their changes in the off-season. Like the Raiders and Panthers - both teams will be thinking this is a game they should win.
MONDAY - 8:00pm @ Hunter Stadium, Newcastle

Eeeeeek... Knights won't be happy getting yet another MNF game for Hunter Stadium. As a season opener and given their supporter catchment - MNF is a killer because it can effectively rule out travelling supporters who have to work the next day. I'm not saying for that reason alone Newcastle shouldn't have a home MNF game but for a season opener the crowd just dropped 5-8k easily. (Remember last year was a Thursday night - different mindset supporter wise than MNF).

Can Queensland win EIGHT series in a row? ... Yep.

Bottom Line: Have just one game on FTA in 20 Rounds (Round 16 @ SOU) and get three straight Sunday night games from Round 3-5. Basically if you like the Raiders - get Foxtel. Worst away stretch is back to back games in Townsville and Melbourne in Round 7-8. But finish season with 4 of last 6 at home. Could end up in China in Round 11 against Manly.

Bottom Line: Start the year in Sydney (5 of their first 6 are at ANZ or Allianz Stadium) and have just the GF replay trip to Melbourne in Round 3. Get 4 home games in a row around their Byes (Round 15-20) but one of those will be in Mackay against Knights and the Storm 'home' game is still to be allocated a venue. Worst away stretch Round 7-10 with just one game at ANZ (they play Cronulla in Gosford, home to Tigers, then away to Warriors and Knights).

Bottom Line: Like a few other Sydney clubs - start the year in Sydney. First six games in the metro area with the biggest trip at Manly in Round 6 before the Rep Weekend. Play Dogs in Gosford (CRO home game) and then the Knights in Newcastle back to back Round 7-8 so will the club entertain a little 'holiday' up the coast that week? Get trips to Auckland, Brisbane, Townsville and Melbourne - so the only 'big' road-trip they avoid is one to the Gold Coast.

Bottom Line: Horrendous end travel wise to 2013. After playing Souths and Tigers at home in Round 20-21, the Titans head to Sydney, Townsville, back to the Gold Coast, then off to Sydney and then Melbourne. If the Titans make a playoff run it needs to be before those final weeks - because having to win almost every road game late will be near on impossible.

Bottom Line: Have an annoying start - playing at Brisbane, then coming back to Sydney and then going back to the Gold Coast. Have the joy of all four big road trips during 2013 - at Melbourne, at Brisbane, at the Gold Coast and at the Warriors. Could end up taking their Round 11 game against Canberra to China.

Bottom Line: Get a nice stretch of 5 home games across 7 matches from Round 7-14. The GF replay is in Round 3 against the Dogs on a Thursday night. Appear on Friday Night Footy just twice in the first 20 rounds... both times against - you guessed it - Brisbane. From Round 15-21 they play just one game at home, and visit the Gold Coast, Sydney (at least once), Auckland and Canberra.

Bottom Line: Opening month is critical given the three home games. Don't get a look in on Friday nights, but will be playing a lot of Sunday footy. Last month is tough bar maybe Round 26 when Parramatta come to town - but trips to Townsville and Brisbane follow a Round 23 clash against the Storm. Given their bad start in 2012 - a record worse than 3-3 after 6 weeks won't be acceptable.

Bottom Line: Could have the toughest opening month in the comp. At Dogs, Knights and Warriors and home to Melbourne. After failing to have back to back home games for the first half of the season, they end 2013 with a flurry - home in 3 straight and 6 of the last 8 games from Round 18. So basically if they start well - their run home could secure a Top 4 berth easily (Cronulla is the only Top 8 team from 2012 they face after Round 21).

Bottom Line: Dream start if you want to re-energise your fan-base after a poor 2012. Souths are the toughest matchup, but if they can squeeze out a 2-2 record before road trips to Townsville and Newcastle - there might be some hope for 2013. Hard way to end the season though - v NQL, @ WAR, v BRI, @ CBY and @ MAN. Too hard.

Bottom Line: Do not like their opening month with road trips to Melbourne and Canberra, a visit from the Broncos and a short trek to Cronulla. Will mix their home games this season after a straight down the middle split between WIN Jubilee and Wollongong in 2012. But you'll take 3 home games in the final month and 5 over the last 7 games - especially if they are still in playoff contention. Finish of @ PAR and v WAR is tasty based on 2012.

Bottom Line: The draw says 3 of first 4 away but they play in Sydney the whole month. only 2 of the first 12 games are out of Sydney, and the 13th is being moved to Cairns from ANZ to play the Titans. Also take a Warriors game to Perth in Round 17. Could have finished the final month in Sydney but moved Manly game to Gosford - otherwise it's ANZ or Allianz.

Bottom Line: SBW mania starts in Sydney and Auckland in the opening month. In fact they play 6 of their first 8 games at Allianz Stadium. They also enjoy just one game from Round 11 onwards outside of Sydney - Round 20 in Newcastle - and although 3 of their last 4 are away - it includes two at Allianz, one at Toyota Stadium and on at ANZ Stadium. Handy draw.

Bottom Line: Life's always going to be tough when you are travelling significantly for at least 12 of your 24 games - but the draw isn't terrible for the Warriors. They enjoy 3 stretches of back to back home games and finish the season with 4 games at home from the final 7 matches. The final month is entirely winnable if they are still in playoff contention.

Bottom Line: Can't complain about the start with two also-rans in the first month sandwiched around two hard road games. Play 4 of 5 at home from Round 16-20. Finish the year with no games at Campbelltown or Leichhardt in the final 6 weeks, and amazingly not a single Sunday afternoon game will be played at Leichhardt for the entire season.

GOT A VIEW ON THE DRAW?