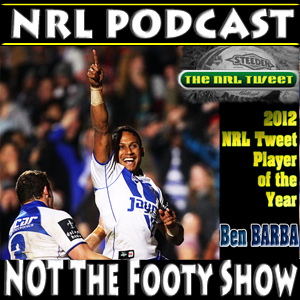 Ben Barba is your 2012 NRLTweet Player of the Year!

NOT The Footy Show Episode 123 has the final voting numbers and Canterbury genius Ben Barba has done the business and won the 2012 @NRLTweet Award.

He beats out North Queensland duo Matthew Bowen and Johnathan Thurston for the individual honour, won in 2011 by Benji Marshall and 2010 by Todd Carney.

So join hosts Warrick Nicolson and Jake Hauritz, as they talk to Matthew Duncan about who made the 2012 season their statement season.

This is NOT the Dally Ms, and we explain our voting system on the show.

NOT The Footy Show 45 minutes of Rugby League Awards with some credibility...

NOT The Footy Show Episode 123
NRLTweet Player of the Year Award - Released Monday September 3, 2012
Right Click Save Target As This Link if you don't have iTunes for the MP3 File
Subscribe to the Podcast via this link / Download mp3 version

LIKE the show on Facebook for all the latest updates. NOT The Footy Show will release another Podcast this Wednesday night - September 5 with our Qualifying Finals Preview.