NRL FINALS WEEK 3 TIPPING PREVIEW
By W D Nicolson
Follow @NRLTweet
Well we've reached the pointy end of the 2012 season everyone, and www.wdnicolson.com is cheering because as much as we enjoy bringing you our weekly preview, podcast and coveted Late Mail - we've only got one more edition after this one to go!

But that's with my team done in September after a surprising run into the finals, there are still four sets of fans who are living the dream for at least another week and here is a look at the odds entering the two Preliminary Finals.

Sea Eagles and even the Storm remain the value... as the big game experience of both teams gives them the edge once one of them get into the Grand Final. Dogs still too short unless they tear the Bunnies a new one on Saturday night.

If you want to hear who the NOT The Footy Show team likes for this weekend's Preliminary Finals - grab yourself our 84 minute NRL Finals Podcast (right click/save target as).

After Week 2 - Upset wins by the Roosters and Dragons make the Toyota Cup race interesting, as the Tigers and Raiders were the underdogs in their opening week semis... and now the Dogs and Warriors are gorn! Enjoy two good semis here people... 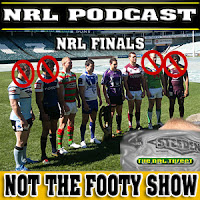 | To the NRL Finals for Week 3 and NOT The Footy Show delivers a full preview of Melbourne v Manly and Canterbury v South Sydney plus plenty more (including a QLD Cup Grand Final Preview)... so join Warrick Nicolson, DC Chapman, Matthew Duncan and guest Adrian McMurray for Episode 127.

So grab NOT The Footy Show for 84 minutes of Rugby League! 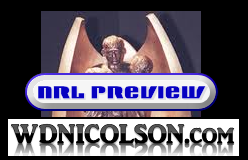 NRL FINALS WEEK 3 PREVIEW - 2012
20/09 Odds are courtesy of Sportingbet Australia
For some more insight into the markets check out NOT The Footy Show's resident betting maestro's site GT Tips http://www.gttips.co.uk
All Kick-Offs are LOCAL time.

| BOTTOM LINE |
Great matchup worthy of a Grand Final without 'salary cap' issues... but instead we get them in a Prelim Final and that's the next best thing.
If the Storm hold the middle then the Big 3 win the game, but if Manly win the physical battle - they could do a number on the Storm... leaning home team, just.
Taking Storm in Melbourne... just worried about Manly's front row holding Bromwich if King is no good.. but Sea Eagles better than a $2.30 outsider in a Preliminary Final.

| BOTTOM LINE |
South Sydney are a team that has to click from the get go and they can be very hard to stop, the Dogs however have won a few games when not at their best - but great starts were a huge factor in their minor premiership run. If Souths do their homework they can shut down Canterbury's two most effective set moves. but the Dogs could harass the Bunnies into error to square the ledger... hopefully there's at least 60,000 there on Saturday at ANZ..
Souths aren't going great... and the Dogs are nicely rested. Down to Barba and Reynolds v Sutton and Luke... because Greg Inglis will be great regardless. Dogs by 6.

NOT The Footy Show TV is taking a short hiatus - we will be back for the Grand Final, promise.
IN THE PODCAST...

Just one win from the big one... and two wins from a ring.
NOT The Footy Show Episode 127 with Manly's Kieran Foran and Steve Matai on the eve of the Preliminary Finals.
Join hosts Warrick Nicolson and DC Chapman as they preview both Preliminary Finals: Melbourne v Manly and Canterbury v Souths with Matthew Duncan and Adrian McMurray.
We talk the sheer genius of the Video Referees these days, recap all the votes from Week 2 of the #NRLTweetPlayerofSeptember Award, Ask how has it been to be a South Sydney fan? Preview the Queensland Cup Grand Final between Redcliffe and Wynnum, Talk the standards that some mainstream media don't seem to get and predict more Over/Unders for the crowds at AAMI Park and ANZ Stadium this weekend.
NOT The Footy Show where you get a brand new Macca's burger to request next time you are out - for absolutely nothing... well just 84 minutes of your life.

NOT The Footy Show Episode 127
NRL Finals Week 3 Preview - Released Wednesday September 19, 2012
Right Click Save Target As This Link if you don't have iTunes for the MP3 File
Subscribe to the Podcast via this link / Download mp3 version

LIKE the show on Facebook for all the latest updates.
NOT The Footy Show will release another Podcast for our Grand Final Show next Wednesday September 25 AND A VIDEO!

LW: 0/2 | PLAYOFFS: 3/6
| REGULAR SEASON 102.5/192
Eyes does not eat Special Fried Rice... yet.
Make sure you enter NOT The Footy Show's Tipping Competition, the outright winner walks away with an Official Steeden Match ball!