Hopefully this site has once again helped you more than it has hindered your Tipping and Fantasy exploits this year, and thank you for your support. The numbers each week show that this site has something going for it - so cheers.

Now let's get to the business end of the season.

Just before we do - let me take this opportunity to recommend you listen to our tribute to Nathan Hindmarsh and the retiring brigade on Episode 122 of NOT The Footy Show, plus of course plenty more footy talk with Maria Tsialis, Matthew Duncan, DC Chapman and myself.

| To Round 26 and NOT The Footy Show delivers our Nathan Hindmarsh tribute and Top 8 Permutations entering Round 26. Plus rumours of a road trip to Canberra, Tony Iro loses the plot, How long can Griffin survive if Brisbane miss the Finals? And we meet a fan... yes one does really exist.

So grab NOT The Footy Show for 77 minutes of pure Rugby League... well kind of. We'll miss you Hindy.

| My 'Locks' are Canterbury, Manly and South Sydney; My 'Less than Confidents' are Melbourne, Brisbane and Parramatta, while My 'Don't put the house on Its' are the Sharks and Warriors.

Good luck with that.

NRL ROUND 26 PREVIEW - 2012
30/08 Odds are courtesy of Sportingbet Australia
For some more insight into the markets check out NOT The Footy Show's resident betting maestro's site GT Tips http://www.gttips.co.uk
All Kick-Offs are LOCAL time.

Round 26 Late Mail...
If you have any reputable mail - Let me know via @NRLTweet
KNIGHTS (+3.5) $2.30 v $1.65 RABBITOHS
The Knights report no problems and will be 1-17 - though there could be a reshuffle come kick-off and Chris Houston is expected to play. The Rabbitohs will find room for Issac Luke with Dave Tyrrell likely to miss out to accommodate him.
| South Sydney are a different unit to the one that got smashed in the corresponding game last year, they win a close one in Newcastle.
BRONCOS $1.22 v $4.50 PANTHERS (+12.0)
Brisbane have injuries but Sam Thaiday, Justin Hodges Jack Reed and Matt Gillett will all play, and Dale Copley makes his comeback this week. The Panthers could find room for Ryan Simpkins in their final 17 with Adam Docker likely to make way.
| Penrith score first and things might be interesting, but the Broncos have so much to play for only the pressure seems capable of beating them here - losing streak or not, they are better than the Panthers.
TITANS (+12.0) $4.50 v $1.22 SEA EAGLES
Nate Myles, Aidan Sezer and Greg Bird could be late omissions, while the Sea Eagles should get Jason King back. There may however be a late change on Manly's bench.
| The Titans played terribly with their season on the line last week and with nothing at stake here and Manly aiming to secure a Top 4 spot - it should be a Manly massacre.
BULLDOGS $1.16 v $5.50 ROOSTERS (+14.5)
The Dogs will look to fire again so resting a player seems more unlikely than last week, the Roosters should be 1-17 after smashing the Tigers last week with this group.
| Canterbury could score 50 here if the Roosters forget they have to start again after last week. Ben Barba will score at the very least a hat-trick and win the Top Tryscorer Title once again.
TIGERS (+2.5) $2.20 v $1.70 STORM
It'd be stunning to see Robbie Farah play, while Ray Cashmere could join the bench at the last minute after being 18th man last week. The Storm are likely to rest a forward or two - with Ryan Hoffman, Jesse Bromwich, Ryan Hinchcliffe and Jason Ryles the likely suspects. Expect the Big 3 to all play.
| The Tigers can win to get a chance at September, but I don't think they will. Melbourne will be all about continuing their momentum and that doesn't mean losing here.
WARRIORS (+4.5) $2.47 v $1.57 RAIDERS
James Maloney may or may not play, there are conflicting reports. Expect him to play off the bench, as the club can't be that classless to not give him one final chance to say goodbye to the fans. The Raiders are unlikely to have Sam Williams, with Shaun Berrigan going into the halves and Travis Waddell joining the bench. There is also talk that Tom Learoyd-Lahrs and Josh Dugan are not 100%... expect them to play if Canberra have to win to make the Finals though, alternatively - they may sit out.
| The Warriors are just as likely to win by 20 as they are to lose by 20... and Canberra are not a great team on a roll... they have beaten average opponents to give themselves a chance at the Finals but I think they slip up here - esp if their playoff spot is secure the night before.
SHARKS $1.70 v $2.20 COWBOYS (+2.5)
Wade Graham could make an appearance on the bench, while Ben Ross, Matt Wright and Anthony Tupou are still no certainties. Ben Pomeroy trained but probably won't be seen until the semis. The Cowboys will know their chances of a Top 4 spot by Sunday so they might rest some forwards but right now that extended bench is likely to cull Blake Leary and Joel Riethmuller and one of James Segeyaro/Anthony Mitchell or Michael Morgan.
| Sharks should've won last week and the Cowboys need something to play for to be a factor here... so if Manly and Souths lose before they play - the Cowboys might not show up here. Pick Cronulla.
EELS (+1.5) $2.05 v $1.80 DRAGONS
Casey McGuire may be getting a farewell game after being a surprise pick in the 17 when his season looked over, while Justin Poore misses without explanation after missing out on Tuesday. The Dragons will choose between Leeson Ah Mau, Jack Stockwell and Cameron King for their final bench spot.
| Eels win for Hindy and the Dragons just go through the motions after farewelling Ben Hornby/Dean Young last week.

NOT The Footy Show TV is taking a short hiatus - we will be back in the Finals.
IN THE PODCAST... 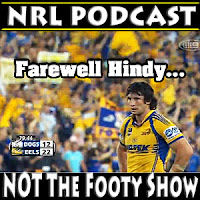 Nathan Hindmarsh tribute and Top 8 Permutations entering Round 26.
NOT The Footy Show Episode 122 has our farewell to Hindy, Petero and the other retirees, How the Top 8 ends up, Road trip to Canberra anyone? Tony Iro loses the plot, How long can Griffin survive if Brisbane miss the Finals? And we meet a fan... yes one does really exist.
So join hosts Warrick Nicolson and DC Chapman, as they talk to Maria Tsialis and Matthew Duncan on this week's episode.
As always we give you a full odds preview of Round 26 with all our picks and final Special Fried Rice selections - but no one can catch the Queen of Rugby League!
NOT The Footy Show 77 minutes of Rugby League... well kind of. We'll miss you Hindy.

NOT The Footy Show Episode 122
Round 26 NRL Preview - Released Wednesday August 29, 2012
Right Click Save Target As This Link if you don't have iTunes for the MP3 File
Subscribe to the Podcast via this link / Download mp3 version

LIKE the show on Facebook for all the latest updates.
NOT The Footy Show will release another Podcast next Monday night September 3 with our NRL Tweet Player of the Year Awards and on Wednesday September 5 with our NRL Qualifying Finals Preview.

LW: 5/8 | SEASON 97.5/184
Eyes does not eat Special Fried Rice... yet.
Make sure you enter NOT The Footy Show's Tipping Competition, the outright winner walks away with an Official Steeden Match ball!