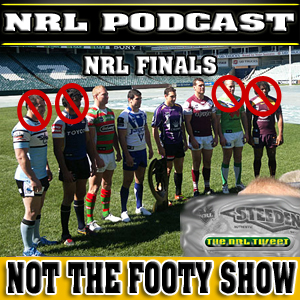 Just one win from the big one... and two wins from a ring.

NOT The Footy Show Episode 127 with Manly's Kieran Foran and Steve Matai on the eve of the Preliminary Finals.

We talk the sheer genius of the Video Referees these days, recap all the votes from Week 2 of the #NRLTweetPlayerofSeptember Award, Ask how has it been to be a South Sydney fan? Preview the Queensland Cup Grand Final between Redcliffe and Wynnum, Talk the standards that some mainstream media don't seem to get and predict more Over/Unders for the crowds at AAMI Park and ANZ Stadium this weekend.

NOT The Footy Show where you get a brand new Macca's burger to request next time you are out - for absolutely nothing... well just 84 minutes of your life.

NOT The Footy Show Episode 127
NRL Finals Week 3 Preview - Released Wednesday September 19, 2012
Right Click Save Target As This Link if you don't have iTunes for the MP3 File
Subscribe to the Podcast via this link / Download mp3 version

LIKE the show on Facebook for all the latest updates.
NOT The Footy Show will release another Podcast for our Grand Final Show next Wednesday September 25 AND A VIDEO!