ROUND 4 SO FAR... Souths almost blow it, as Manly pay for lapses; Brisbane win with their defence again, as Penrith have a dig; Gold Coast grasp a miraculous victory, as Canberra self destruct; Parramatta's persistence pays off, as the Cowboys let one slip; the Warriors remember how to attack as Cronulla despite losing keep improving; St.George-Illawarra hold on, as Newcastle can't find a way through; and Sydney rediscover their game, as the Tigers struggle to score; Storm at dominant best, as Bulldogs find the going tough for the first time in 2011.
NRL Tweet Player of the Year Votes are added as awarded.

Here on www.wdnicolson.com we've got all the Game Results, Match Reports, Game Highlights, Game Stats, Injury News & NRL Tweet Player of the Year Award Votes in the one place.
This Round Review also integrates our NRL Injured List - which if you haven't bookmarked by now - I suggest you do so.
This year not only do you get The NRL Tweet's Tips each week but the whole NOT The Footy Show team will have their picks listed by Thursday so you can back a smoky or a favourite by seeing who we all picked (or didn't pick). We make no promises that we'll get everything right but at least one of us should be good for a lazy 60-65% success rate in 2011.
Check out the Round 4 Review below.
NOT The Footy Show's Round 4 Podcast

30/3 Odds are courtesy of Sportingbet Australia 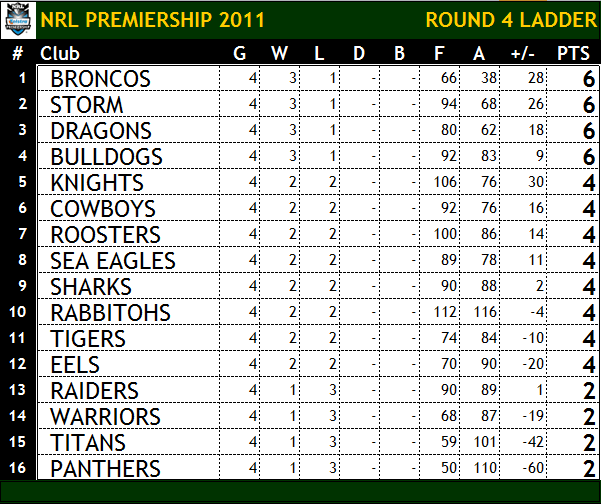 THE NRL TWEET's ROUND 4 REVIEW

7:45pm (Local) 1 April @ Suncorp Stadium, Brisbane.
NRLTweet Game Summary: Brisbane continue their defensive revival by coming from 10-6 down at HT, to defeat the Panthers 18-10 at Suncorp. Lockyer all class.
Injuries: Travis Burns (Concussion), Luke Lewis (Wrist), Sam McKendry (Hip - pre-game), Lachlan Coote (Groin)
2011 @NRLTweet Player of the Year Votes
Judge: M Duncan
4 - Jharal Yow Yeh, BRI
Looked dangerous every time he touched the ball. Showed blistering speed to score a try, defended well and was safe under the high ball.
2 - Ben Hannant, BRI
Got through a stack of work - 30 + tackles and made over 100m in hit ups. The Broncos looked a better side with him on the field
1 - Tim Grant, PEN
Was very good in a beaten side. His go forward kept the Panthers in the game.
Judge: M McLucas
4 - Jharal Yow Yeh, BRI
Highlighted his finishing skills with a great chase from a Lockyer kick to score. Was most impressed with his defence. Good under the high ball and made great decisions as to when to come in off his wing.
2 - Ben Hannant, BRI
Strong up front performance in his second game back at the Broncos. Gained good, valuable metres up the middle.
1 - Tim Grant, PEN
Not many good signs from the Panthers but this big man didn't stop trying all night. Top effort
GAME HIGHLIGHTS
|-| |-| |-|

5:35pm (Local) 2 April @ Canberra Stadium, Canberra.
NRLTweet Game Summary: Matt Orford pulls off a beautiful Chrs Heighington impression as the Raiders blow a 6pt lead in 80th min. Titans win 23-22.
Injuries: Josh Dugan (Calf), Joel Thompson (Head Gash), Dane Tilse (Hammy), Scott Prince (Hammy - late withdrawal), Preston Campbell (Knee)
2011 @NRLTweet Player of the Year Votes
Judge: G Delaney
4 - Greg Bird, GLD
Orchestrated the win with a great kicking game and directing traffic with all the other halves gone. Winning field was the icing on a tremendous game.
2 - Daniel Vidot, CAN
Safe as houses at the back for the Raiders. Got them on the front with some outstanding work from dummy half. Topped off with a brilliant try in the corner.
1 - Luke Bailey, GLD
Took the fight to the underperforming Raiders pack. Led from the front with 160 metres and 29 tackles.
Judge: J Davies
4 - Greg Bird, GLD
Took it upon himself in the absence of Scott Prince to get Gold Coast across the line. Potted the match-winning field goal in extra time.
2 - Luke Bailey, GLD
Played his usual massive minutes and carved out the metres and tackles all afternoon.
1 - Blake Ferguson, CAN
Despite a monumental stuff up in extra-time, he ran the ball back with purpose and gave Canberra a lift when shifted to fullback to cover for the injured Josh Dugan.
GAME HIGHLIGHTS
|-| |-| |-|

7:35pm (Local) 2 April @ Parramatta Stadium, Sydney.
NRLTweet Game Summary: Parramatta's persistence pays off as Ashley Graham gifts Luke Burt a chance to win the game from touch... He does & Eels win 22-20.
Injuries: Ryan Morgan (Ankle), Matthew Keating (Finger).
2011 @NRLTweet Player of the Year Votes
Judge: W Nicolson
4 - Nathan Hindmarsh, PAR
If he isn't the first forward picked for NSW then there needs to be a Federal investigation. He's pure quality in the sense that everything he does is to the best of his ability and that tackle on Glenn Hall on the tryline was superb. Legend.
2 - Dallas Johnson, NQL
From the vantage point I had at the ground you saw that the amount of quality tackles he makes in a game. Finished with 60 odd tackles and still had enough energy for a few hitups. You really see how valuable he is from front on (behind the posts) - and for his size he's a marvel.
1 - Luke Burt, PAR
Broke a club record with his two tries and sunk the Cowboys with a sideline conversion in the final two minutes. Fair day at the office.
Judge: M Tsialis
4 - Tim Mannah, PAR
Had some authoritative charges and put some much needed grunt into Parra’s pack.
2 - Matthew Scott, NQL
He does a lot of unsung work for the Cowboys, and continued to smash his way through the defensive line.
1 - Luke Burt, PAR
How great for the long serving winger to finally get the Parramatta tryscoring record. Did what every good outside back does - score tries. Also kicked a brilliant goal to win it.
GAME HIGHLIGHTS
|-| |-| |-|

2:05pm (Local) 3 April @ Owen Delany Stadium, Taupo (NZ).
NRLTweet Game Summary: Warriors get a win on the board after defeating Cronulla 26-18 in Taupo. Encouraging performance from both teams but Warriors too good.
Injuries: Micheal Luck (Head Gash), Jeremy Smith (Calf)
2011 @NRLTweet Player of the Year Votes
Judge: C Buchanan
4 - Glen Fisiiahi, WAR
2 line breaks led to 2 tries, had some good runs through the middle backing up off Mateo offloads, the Fish showed fullback is where he should play.
2 - Paul Gallen, CRO
A typical performance making strong tackles and hit ups, while gaining over 100m and standing up to the Warriors time & time again.
1 - Jacob Lillyman, WAR
The unsung hero of the Warriors performance, he carved out some good meters taking the Warriors forward.
Judge: D Neville
4 - Glen Fisiiahi, WAR
Two tries and it looks like fullback is his best position. Johnny on the spot.
2 - Simon Mannering, WAR
Great in Defance on the right hand side and handled Gallen running at him all afternoon.
1 - Ukuma Ta'ai, WAR
Made a few mistakes, but had a powerful running game in his first match of the season.
GAME HIGHLIGHTS
|-| |-| |-|

2:05pm (Local) 3 April @ AusGrid Stadium, Newcastle.
NRLTweet Game Summary: Newcastle sport the Dragons too big a lead in the 1st half & their fightback falls just short in Newcastle. Dragons win 20-18.
Injuries: Junior Sa'u (Groin), Zeb Taia (Shoulder), Nathan Fien (Shoulder), Dan Hunt (Knee), Dean Young (Knee), Ben Creagh (Neck)
2011 @NRLTweet Player of the Year Votes
Judge: R Neilsen
4 - Ben Creagh, STI
Strong defensive game with 36 tackles and made 140m. Pulled off a number of vital tackles.
2 - Jamie Soward, STI
Again, a quality performance. Pinpoint accuracy with his kicking game, and always an elusive customer in offence.
1 - Kurt Gidley, NEW
Tried everything to set up the match winner for the Knights. Always in the game.
Judge: H Southon
4 - Jason Nightingale, STI
Scored a try and his presence in the contest helped set up the first try of the game to Boyd. Defused all bar one dangerous situation and took a lot of pressure off forwards with relieving hit ups.
2 - Jarrod Mullen, NEW
Displayed more of his early season form. A great kicking game, and set up a Cory Paterson try with a deft little pass.
1 - Ben Creagh, STI
Provided the go-forward when needed most by the Dragons. Also a stand out in defence.
GAME HIGHLIGHTS
|-| |-| |-|

3:05pm (Local) 3 April @ Sydney Football Stadium, Sydney.
NRLTweet Game Summary: The Sydney Roosters hit their stride early against the spirited Wests Tigers & run out 24-6 winners at the SFS.
Injuries: Jason Ryles (Back - pre-game), Frank-Paul Nu'uausala (Knee - pre-game), Nate Myles (Head), Tom Symonds (Concussion), Benji Marshall (Ankle)
2011 @NRLTweet Player of the Year Votes
Judge: M Spillane
4 - Martin Kennedy, SYD
Had a wow of a game with only limited time on the field. Scored a great try, had 6 tackle breaks, 2 linebreaks and ran for 128m.
2 - Shaun Kenny-Dowall, SYD
Put in one of his "diamond" performances. Grew an extra arm to score a try and had an incredible 12 tacklebreaks.
1 - Jake Friend, SYD
Was dangerous around the ruck all day, and created plenty of havoc for the Tigers defence. Made a game high 38 tackles too.
Judge: W Nicolson
4 - Martin Kennedy, SYD
Took the Tigers on up the middle and ran rampant. The Roosters had to take advantage of a depleted Tigers pack and Kennedy led the way.
2 - Benji Marshall, WTG
Tried everything he could to spark the Tigers but really missed the presence of Ellis, Lawrence and Tuqiri on the left edge. Is in some stellar form right now even if the Tigers only scored 6 points.
1 - Shaun Kenny-Dowall, SYD
Scored the first try of the game and his determination to reach through a heap of Tigers defenders to score typified how the Roosters would play the rest of the afternoon. Always dangerous.
GAME HIGHLIGHTS
|-| |-| |-|

7:05pm (Local) 4 April @ AAMI Park, Melbourne.
NRLTweet Game Summary: Melbourne show the Bulldogs what being a contender means with a dominant display at AAMI Park. Storm win 30-16 as Bulldogs never in it.
Injuries: Anthony Quinn (late withdrawal may not have been injured), Troy Thompson (Head Gash), Jamal Idris (Concussion)
2011 @NRLTweet Player of the Year Votes
Judge: W Nicolson
4 - Cameron Smith, MEL
When the game was won in the first half it was the Cameron Smith Show - he just does everything at such a high level that you can't help but be impressed. Exposed the massive difference in quality between him and Michael Ennis tonight and did it all so easy.
2 - Billy Slater, MEL
Was sensational in attack but Smith was just that little bit better all-round. When he's on there's few players who can expose a half gap like Slater. Just a joy to watch tonight.
1 - Bryan Norrie, MEL
Took Canterbury on up the middle early and Melbourne never looked back from there. Threw himself into every hit up and tackle and had a nice one on one battle with Aiden Tolman all night.
Judge: B Hoese
4 - Cameron Smith, MEL
Led the team around the park with a near perfect passing and kicking game. Chose the right option almost every time.
2 - Billy Slater, MEL
The true danger man and possibly psychic. Was in the right place every time he was needed. If there's a crack in a wall, he'll step through it.
1 - Tim Lafai, CBY
With limited opportunities was dangerous each time he touched the ball and strong in defence. Never gave up. Josh Morris has not been missed.
GAME HIGHLIGHTS
NRLTWEET PLAYER OF THE YEAR LEADERBOARD - AFTER ROUND 4 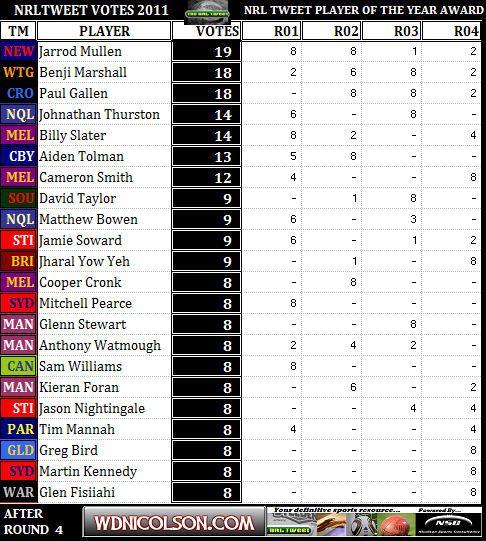 NOT THE FOOTY SHOW's EXPERT TIPS:
ROUND 4 SELECTIONS

Eyes, The Kid Who Sees All
Rabbitohs +
Broncos + 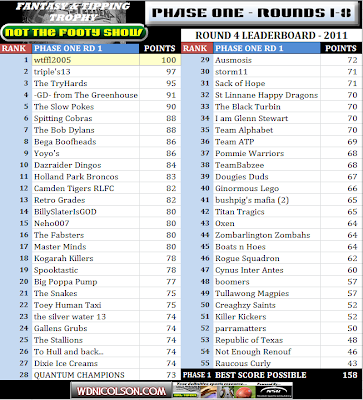