ROUND 5 SO FAR... Tigers stick to the game plan, as Souths get a wake up call ... Cowboys continue their resurgence, as Titans fall in a heap ... Warriors bash their way to another win, as Roosters struggle in the conditions ... Panthers put it together, as Raiders remain a rabble ... Sea Eagles snatch one, as Sharks are stunned ... Melbourne irresistible, as Eels crash back to earth ... Dragons re-assert premiership authority, as Bulldogs come up short against quality for second straight week ... Brisbane continue their winning streak, as Knights let too many opportunities slip.
NRL Tweet Player of the Year Votes are added as awarded.
Here on www.wdnicolson.com we've got all the Game Results, Match Reports, Game Highlights, Game Stats, Injury News & NRL Tweet Player of the Year Award Votes in the one place.
This Round Review also integrates our NRL Injured List - which if you haven't bookmarked by now - I suggest you do so.
Check out the Round 5 Review below.
NOT The Footy Show's Round 5 Podcast

ROUND 5 MATCHUPS
07/04 Odds are courtesy of Sportingbet Australia 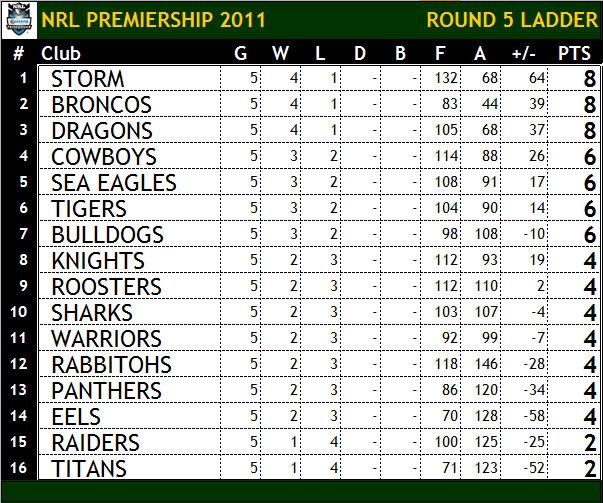 THE NRL TWEET's ROUND 5 REVIEW

7:45pm (Local) 8 April @ Sydney Football Stadium, Sydney.
NRLTweet Game Summary: The Wests Tigers show that as long as their pack stands up, Marshall & Farah can tear anyone apart. Beat Souths 30-6 at the SFS.
Injuries: Keith Galloway (Groin), Geoff Daniela (Pectoral), Luke Stuart (Knee)
2011 @NRLTweet Player of the Year Votes
Judge: Warrick Nicolson
4 - Benji Marshall, WTG
He's just a gun... there really isn't much more you need to say. If he fires the Tigers will beat anyone... well as long as the next bloke does as well.
2 - Robbie Farah, WTG
Executed Tim Sheens' game plan perfectly and ran his forwards at the big Rabbitohs pack in the early tackles to tire them out for Benji to work his brilliance later in the set. Injury or not he's all class.
1 - Simon Dwyer, WTG
When Tim Sheens said Dwyer reminded him of Bradley Clyde a few years ago, it was hard to imagine Dwyer could match the great lock forward... but when he puts in performances like this - maybe the genius coach is right about something yet again.
Judge: Ben Hoese
4 - Benji Marshall, WTG
Involved in everything. Created gaps, set up line breaks, and scored possibly the best solo try of the year.
2 - Simon Dwyer, WTG
Carried a heavy work load in a depleted forward pack. Resembled Liam Fulton at his peak in every aspect. Scored two tries and made several fullback style linebreaks.
1 - Matt Utai, WTG
Grunt winger. Strong in defence and attack. Reminiscent of 2004 form.
GAME HIGHLIGHTS
|-| |-| |-|

7:45pm (Local) 8 April @ Dairy Farmers Stadium, Townsville.
NRLTweet Game Summary: North Queensland continue to build as a team, never looking in trouble against a Titans side that lack creativity. Cowboys win 22-12.
Injuries: Anthony Laffranchi (Ankle)
2011 @NRLTweet Player of the Year Votes
Judge: Michael McLucas
4 - Johnathan Thurston, NQL
Controlled the game beautifully, especially in the first half. Scored a try and had a hand in the other 3 for the Cowboys.
2 - Gavin Cooper, NQL
Combined really well with Thurston on the left, scoring a try and making a great break to set up Bowen's try.
1 - Willie Tonga, NQL
Looked dangerous with ball in hand and scored the first try.
Judge: Matt Spillane
4 - Johnathan Thurston, NQL
If he gets a platform from his forwards and defensively the Cowboys aim up - he'll pick teams apart, just as the Titans found out in the first half.
2 - Gavin Cooper, NQL
Is going that good (until he misses a week for a lifting tackle) that he kept the left edge backrower spot for the full 80 minutes despite the return of Scott Bolton. Considering he's still not 100% with a knee injury it's quite a feat.
1 - Matthew Scott, NQL
Continues to build on his outstanding 2010 season and is without doubt the barometer of the North Queensland pack. If Scott gets them moving forward, the rest of the team can do their thing.
GAME HIGHLIGHTS
|-| |-| |-|

5:35pm (Local) 9 April @ Mt Smart Stadium, Auckland.
NRLTweet Game Summary: Warriors make it two in a row with a 24-12 win over the Roosters in Auckland. It's a bashfest at Mt Smart.
Injuries: Glen Fisiiahi (Ankle)
2011 @NRLTweet Player of the Year Votes
Judge: Craig Buchanan
4 - Simon Mannering, WAR
A captain's knock, led from the front with big metres, hit ups and tackles, was there or thereabouts all night.
2 - Shaun Kenny-Dowall, SYD
A try, hit ups, tackles, line breaks, offloads - SKD was always a threat to the Warriors.
1 - Ukuma Ta'ai, WAR
Looked mean, had some massive hit ups and was good up the middle.
Judge: Greg Delaney
4 - Micheal Luck, WAR
Plugging the middle third with 44 tackles, Luck led by example in defence and enthusiasm.
2 - Lance Hohaia, WAR
Filling in at fullback off the bench it looked like he didn't miss a beat. Running for 75 metres and scoring a great individual try.
1 - Jake Friend, SYD
Standout for the Roosters with 52 tackles and nice try assist.
GAME HIGHLIGHTS
|-| |-| |-|

7:35pm (Local) 9 April @ Centrebet Stadium, Penrith.
NRLTweet Game Summary: Penrith take full advantage of an embarrassingly inept Raiders outfit with an easy 36-10 victory. Michael Gordon excels at fullback.
Injuries: Luke Walsh (Shoulder), Sarafu Fatiaki (Nose)
2011 @NRLTweet Player of the Year Votes
Judge: Warrick Nicolson
4 - Michael Gordon, PEN
He is a huge weapon for Matt Elliott when he's at fullback... was the best player on the field and kicked beautifully. He's just too good at fullback, so where does that leave Lachlan Coote when he comes back?
2 - Petero Civoniceva, PEN
Just kept rolling forward up the middle against a so called superior pack of forwards. Capped off his night with a meat pie because he wanted it more than the Raiders defenders.
1 - David Simmons, PEN
Johnny on the spot for his hat-trick and that's not always the easiest skill to master - he's making the most of his recall to first grade.
Judge: Matthew Vickers
4 - Michael Gordon, PEN
I know there is huge wraps on Lachlan Coote, but I reckon Penrith look more balanced with Gordon at fullback.  He is also more consistent; less rocks or diamonds if you will.  For his 80 minutes work on Saturday night he found a try; a try assist; 2 offloads; 6 tackle breaks; a line break and a line break assist; as well as 6 from 7 with the boot.
2 - Petero Civoniceva, PEN
It seems when Petro fires, Penrith fire.  Matty Elliott should simply spend one on one time extracting the best out of Petero, and the rest will fall into place.  13 carries for 115 metres; 2 offloads; 2 tackle breaks; and a meat pie; all in only 42 minutes.
1 - Travis Burns, PEN
When you think ‘halves combinations’ Burns and Walsh do not immediately spring to mind.  That’s because it is generally one or the other; tonight was Travis’ turn to shine.  2 try assists; a line break; 3 tackle breaks; an offload; and a try.
GAME HIGHLIGHTS
|-| |-| |-|

2:05pm (Local) 10 April @ AAMI Park, Melbourne.
NRLTweet Game Summary: Melbourne remain dominant at home, dismissing Parramatta's challenge without a second thought en route to a comprehensive 38-0 win.
Injuries: Troy Thompson (Knee)
2011 @NRLTweet Player of the Year Votes
Judge: Matthew Duncan
4 - Cameron Smith, MEL
Class with a capital C. He makes everything look so easy. Had the Storm on the front foot all game. Also got through a stack of defence.
2 - Billy Slater, MEL
Looked dangerous with every touch off the ball. He got better as the game went on & had the Eels defence constantly in two minds.
1 - Cooper Cronk, MEL
Steered the team around the park well. Run the ball well which resulted in the early try and kicking game was solid as always.
Judge: Ben Hoese
4 - Cameron Smith, MEL
Led the Storm around all day. Never took the wrong option. Fast out of dummy. Heavy tackle load.
2 - Billy Slater, MEL
Slow 1st half but really kicked it up 10 notches in the 2nd half. Tore the defence apart, finding gaps all over the field.
1 - Nathan Hindmarsh, PAR
Heavy in defence. Not much opportunity for attack but picked up a stronger tackle load to compensate.
GAME HIGHLIGHTS
|-| |-| |-|

3:05pm (Local) 10 April @ Sydney Cricket Ground, Sydney.
NRLTweet Game Summary: St.George-Illawarra are just too good on both sides of the ball for Canterbury at the SCG and ease to a 25-6 victory.
Injuries: Jamal Idris (Thigh)
2011 @NRLTweet Player of the Year Votes
Judge: Justin Davies
4 - Jamie Soward, STI
His kicking game was high class like usual and he was involved in everything.
2 - Matt Cooper, STI
A few classy touches plus two tries.
1 - Beau Scott, STI
Hit hard and boy didn't the Canterbury forwards know it afterwards.
Judge: Maria Tsialis
4 - Matt Cooper, STI
Hasn't aged a day. Showed up his younger more fancied opponents with ease.
2 - Dan Hunt, STI
Everybody thought the Dragons would miss Michael Weyman, but not with this guy around.
1 - Michael Ennis, CBY

He was the sole reason the Bulldogs even looked like they were s
lightly coming back into the contest. Took charge when needed.
GAME HIGHLIGHTS
|-| |-| |-|

7:05pm (Local) 11 April @ Suncorp Stadium, Brisbane.
NRLTweet Game Summary: Brisbane make it 4 wins on the trot by defeating the Knights 17-6 at a wet Suncorp Stadium. Both teams defended superbly.
Injuries: Isaac De Gois (Shoulder), Joel Edwards (Concussion), Mitchell Dodds (Concussion)
2011 @NRLTweet Player of the Year Votes
Judge: Matthew Duncan
4 - Justin Hodges, BRI
Adds such an X-Factor & confidence to the Broncos backline. He looked as if he was going to break every tackle. Also made some important plays in defence.
2 - Gerard Beale, BRI
Very good under the high ball on a tough night for fullbacks. Kick returns were great, constantly beating the first defender.
1 - Peter Wallace, BRI
Had a hand in all 4 tries and his kicking game in the oppositions half had the Knights back 3 in trouble all night.
Judge: Rob Neilsen
4 - Justin Hodges, BRI
Great game from Hodges - made good metres and was tenacious in defence.
2 - Sam Thaiday, BRI
Had 27 tackles and 17 runs for 150 metres. Good all round game for the big front rower.
1 - Jack Reed, BRI
Scored two handy tries in tricky conditions from kicks.
GAME HIGHLIGHTS
]-[ ]-[ ]-[

- NRLTWEET PLAYER OF THE YEAR LEADERBOARD - 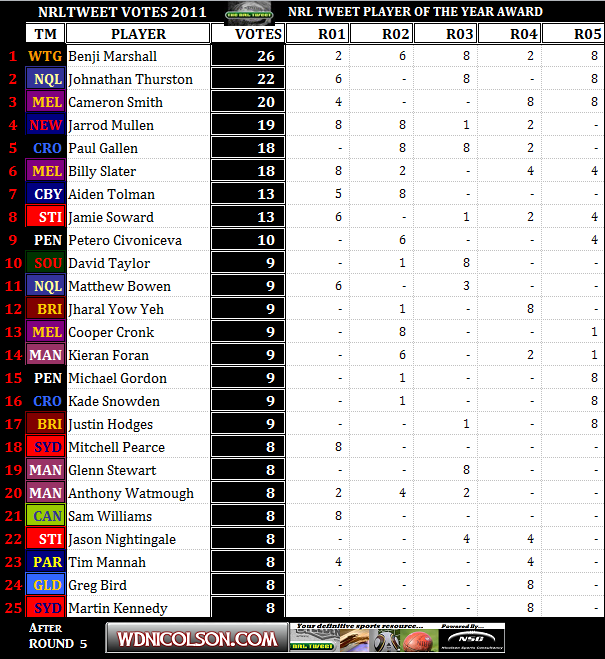 NOT THE FOOTY SHOW's EXPERT TIPS:
ROUND 5 SELECTIONS

FANTASY LEAGUE LEADERBOARD AFTER ROUND 5 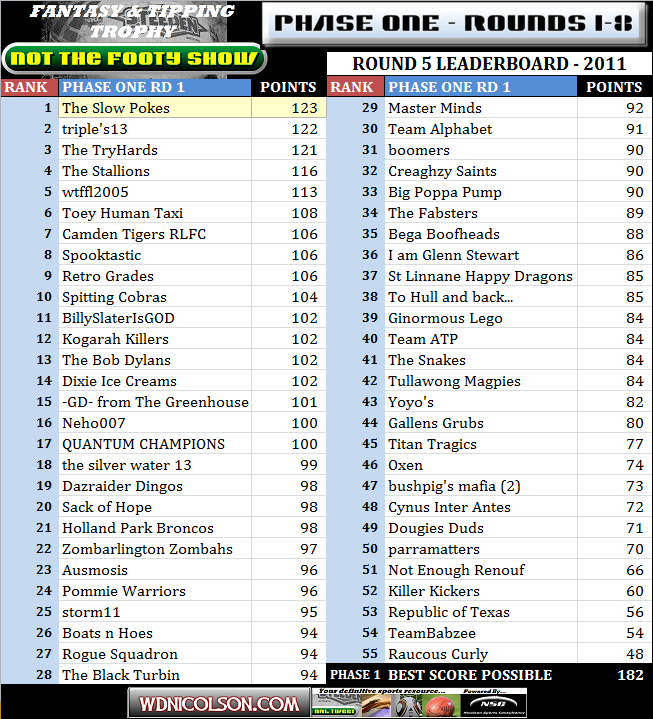 ]-[ It's not too late to join our Tipping Competition as long as you're already signed up for Tipping on the Daily Telegraph Website. We use that site because their overall prize is pretty good and you'll be on there for Super Coach anyway. Our League Code is 446386 and you can invite as many people as you want to take on the boys & girls from NOT The Footy Show.
1st Prize is an Official Steeden Match ball.
And if you miss the Round 1 Deadline for our Fantasy League - don't worry the 2nd phase begins in Round 10.
As an added bonus - here is a Fantasy League BYE Week Cheat Sheet. Especially for the NRL Dream Team, Super Coach or Fantasy NRL minded crew.