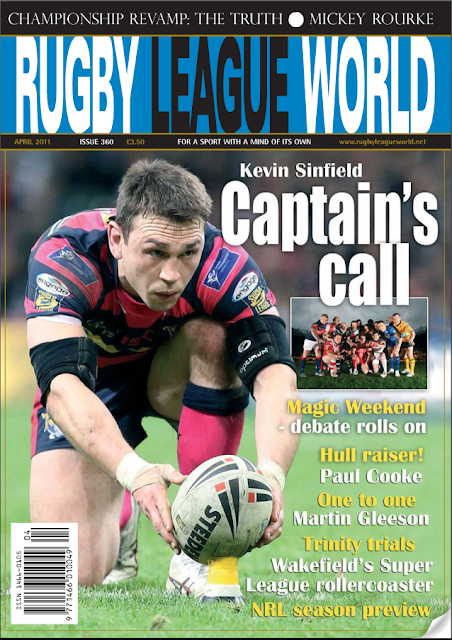 When Rugby League World Magazine ordered a 3,500 word Season Preview for the 2011 NRL Premiership - I decided that to be able to give both the casual and dedicated reader something to sink their teeth into, it really required 5,000 words. Because if I'm going to stick my neck out and predict what will happen in 2011, I want to be able to make a rational argument.

Mind you I could still be way off with those predictions but at the very least - I would've given the reader no reason to doubt my analysis... until the first round.

So if you pick up a copy of Issue 360 of the fine publication (you can get it via an on-line version or have the original version posted to you) you get to read up on four key areas on every NRL Club.

What they did: Summary of their 2010 Season and why they finished where they did.

Who they can do: What is their upside as a team - is there a premiership in the offing?

Three Key Performers: The three players who hold the key to their team's fortunes in 2011.

What they will do: What I ultimately think will happen to this team's season - to contend or pretend?

In the end all 16 NRL clubs were measured, analysed and their fortunes told  - as I settled on the following Regular Season Ladder for 2011:


But who makes the Grand Final?

Who takes out the Premiership?
Well you'll have to buy the magazine (on-line version available) and then complain as to why my Premiers are not your team.

As always Rugby League World is a great read -  so go get the April Issue.

It is a cracking read. 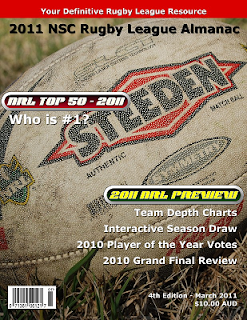 We've promised it since the end of the 2010 NRL Season but the 2011 NSC Rugby League Almanac will be out in late March with comprehensive depth charts for every club, your club's recruitment analysis, a full rundown of the 2010 NRL Tweet Player of the Year Votes and our very special Top 50 Players in the NRL.

The Top 50 Players Feature is something you can't afford to miss.

If you would like to pre-order a copy send an email to this address. It will cost AU $10.00.

Remember for the best Twitter coverage of Rugby League - follow us via @NRLTweet & get yourself a copy of the magazine!
By W D Nicolson