ROUND 3 SO FAR... Brisbane win with their defence, Titans can't score to save themselves, South Sydney wake up, Parramatta still don't have any halves, Cronulla keep the good times rolling, Penrith pretend to care, Wests Tigers win but at a cost, the Raiders get Benji'd, Dragons re-assert themselves, Warriors look rudderless, Bulldogs laughing at 3-0, Roosters can't capitalise late, Manly coast, Knights battle with injuries, North Queensland dominate and Storm get dominated.

All NRL Tweet Player of the Year Votes are added as awarded.

Here on www.wdnicolson.com we've got all the Game Results, Match Reports, Game Highlights, Game Stats, Injury News & NRL Tweet Player of the Year Award Votes in the one place.

This Round Review also integrates our NRL Injured List - which if you haven't bookmarked by now - I suggest you do so.
This year not only do you get The NRL Tweet's Tips each week but the whole NOT The Footy Show team will have their picks listed by Thursday so you can back a smoky or a favourite by seeing who we all picked (or didn't pick). We make no promises that we'll get everything right but at least one of us should be good for a lazy 60-65% success rate in 2011.

Check out the Round 3 Review below.

ROUND 3 RESULTS
24/3 Odds are courtesy of Sportingbet Australia 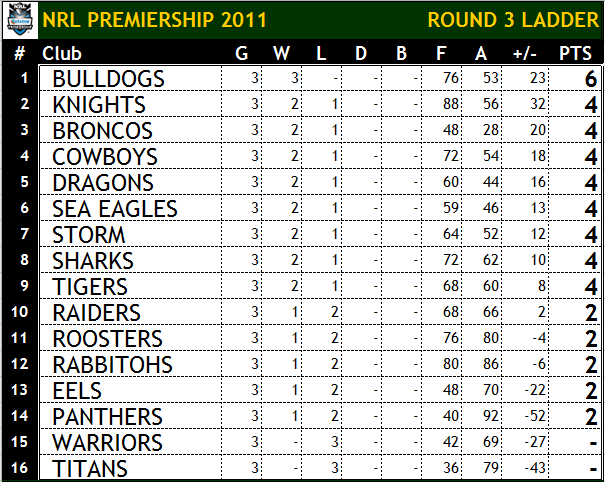 THE NRL TWEET's ROUND 3 REVIEW

7:35pm (Local) 25 March @ ANZ Stadium, Sydney.
NRLTweet Game Summary: Parramatta didn't get a call or two early but there wasn't any doubt who was the better team as Souths break their duck with 32-18 win.
Injuries: Issac Luke (Concussion), Rhys Wesser (Hammy), Casey McGuire (Calf), Justin Horo (Head Gash)
2011 @NRLTweet Player of the Year Votes
Judge: N Wilbow
4 - Dave Taylor, SOU
Was a force in attack setting up 2 tries and causing the Parramatta defence problems all night.
2 - Eddy Pettybourne, SOU
Tackled strong and made pletty of meters in attack.
1 - Rhys Wesser, SOU
For 'that' pass.
Judge: G Delaney
4 - Dave Taylor, SOU
With 2 try assists and 3 offloads he terrorised the right edge of the Eels defence. Also made a handy 22 tackles.
2 - Greg Inglis, SOU
Scored a try, set up 2 and made 8 tackle breaks. Inglis flourished with some ball and room to work with in this game.
1 - Eddy Pettybourne, SOU
Running straight and hard for 110 metres and getting the Rabbits on the front foot. Put up his hand with 29 tackles to boot.
GAME HIGHLIGHTS
|-| |-| |-|

7:35pm (Local) 25 March @ Skilled Park, Gold Coast.
NRLTweet Game Summary: The Gold Coast waste a golden opportunity to win their first game of 2011, letting Brisbane (with barely any possession) win 14-8.
Injuries: Ashley Harrison (Hammy), Justin Hodges (Hammy), Josh Hoffman (Calf/Ankle), Sam Thaiday (Concussion), Ben Te'o (Leg)
2011 @NRLTweet Player of the Year Votes
Judge: M Duncan
4 - Corey Parker, BRI
Knocked down everything that come his way. Tackled, tackled and then tackled some more. Also had enough energy to kick some handy conversions.
2 - Gerard Beale, BRI
Recovered well from an early clanger. Went very well when he moved to fullback to cover Hoffman. Looked dangerous returning the ball & made a brilliant try saver on Zillman.
1 - Justin Hodges, BRI
Amazing performance considering his time on the sidelines. Defended well, and topped it off with the match winning try.
Judge: W Nicolson
4 - Matt Gillett, BRI
Made the big play of the night which was charging down Greg Bird's clearing kick early in the second half that led to the Alex Glenn try. That play turned the match and the Broncos looked likely from then on. A threat when on the edges and he defended well.
2 - Corey Parker
Made a million tackles and considering the sheer weight of possession the Titans had during the match - you've gotta recognise a contribution that sees him go past the half century. Also kicked flawlessly for goal.
1 - William Zillman
The only Titan to look dangerous all night... and when you consider how much ball they had - that's quite an achievement. Was a threat running onto an inside ball and made a couple of try-saving tackles. Unfortunately gave away a penalty for an attempted double movement in the final seconds... only problem is it didn't look like he actually touched the line.
GAME HIGHLIGHTS
|-| |-| |-|

5:35pm (Local) 26 March @ Centrebet Stadium, Penrith.
NRLTweet Game Summary: Cronulla's stunning form reversal continues as they pound the Panthers 44-12. Sharks were up 24-6 at the break & went on with it.
Injuries: Luke Lewis (Thumb), Luke Walsh (Shoulder), Timana Tahu (Cramp), Lachlan Coote (Foot), Nigel Plum (Thumb)
2011 @NRLTweet Player of the Year Votes
Judge: J Davies
4 - Paul Gallen, CRO
Who else, scored the first try, setting the tone for the thrashing, leading his team from the front.
2 - Albert Kelly, CRO
His breakout game in the NRL, scored two tries and looked much more comfortable at five-eighth.
1 - Anthony Tupou, CRO
Popped offloads like pills and played like the Origin player he was a few seasons ago.
Judge: M McLucas
4 - Paul Gallen, CRO
In career best form at the moment. Picked up where he left off from last week with an inspiring display. Becoming a really good leader.
2 - Albert Kelly, CRO
Looked very dangerous and was rewarded with 2 tries. Seems to be finding his feet.
1 - Anthony Tupou, CRO
Living up to the promise he showed early in his career and got some nice second phase going with his offloads.
GAME HIGHLIGHTS
|-| |-| |-|

7:35pm (Local) 26 March @ Campbelltown Stadium, Campbelltown.
NRLTweet Game Summary: Canberra are given a lesson by Benji Marshall & the Wests Tigers who cruise to a 34-24 win. Win marred by injuries to Tuqiri & Lawrence
Injuries: Chris Lawrence (Hip), Lote Tuqiri (Arm), Robert Lui (Ankle), Joe Picker (Ankle)
2011 @NRLTweet Player of the Year Votes
Judge: W Nicolson
4 - Benji Marshall, WTG
Yeah he's pretty good... had the Raiders on the back foot with his footwork and precision passing and set up the win in the first half. Genius.
2 - Todd Payten, WTG
The halfback in a prop's body proved he's still got those instincts in his 250th First Grade game - with a number of silky smooth touches that led to tries. Does his share of the work too.
1 - Aaron Woods, WTG
Took the bigger name Canberra props on up the middle and won. For a kid with only a few top grade games under his belt he seems to keep up with the pace of the game very well.
Judge: G Delaney
4 - Benji Marshall, WTG
Had the ball on a string for the majority of the match. With 3 try assists he took the game away from Canberra in the first half.
2 - Blake Ferguson, CAN
3 tries in an under performing Raiders outfit and always posed a threat, the lone Raiders player who can hold his head high.
1 - Aaron Woods, WTG
Took the fight to the Raiders pack with 120 metres off the bench, got the Tigers rolling forward when he came on.
GAME HIGHLIGHTS
|-| |-| |-|

2:05pm (Local) 27 March @ Mt Smart Stadium, Auckland.
NRLTweet Game Summary: Dragons make a statement with some key forwards out - easily accounting for the Warriors 25-12 in Auckland. Hunt & Merrin outstanding.
Injuries: Ben Creagh (Neck), Jerome Ropati (Knee)
2011 @NRLTweet Player of the Year Votes
Judge: M Vickers
4 - Trent Merrin, STI
This kid's performance meant Weyman wasn't missed. Did the dirty work; some off loads; and was very hard to bring down.
2 - Dan Hunt, STI
Like Merrin, stepped up to fill the void. After Creagh's injury was the elder statesman of the forward pack and led them with aplomb.
1 - Jamie Soward, STI
A very strong kicking performance, both in general play and for goal. Set up two tries and was defensively very strong.
Judge: C Buchanan
4 - Jason Nightingale, STI
A dominant force in the 1st half with his running and was richly rewarded with two tries.
2 - Lewis Brown, WAR
Played very well in a losing team, made some strong runs up the middle eating up over 100m and defended stoutly.
1 - Matt Cooper, STI
Scored a try, made a few breaks and popped up everywhere in defence... well before he got sent to the bin.
GAME HIGHLIGHTS
|-| |-| |-|

2:05pm (Local) 27 March @ ANZ Stadium, Sydney.
NRLTweet Game Summary: Canterbury move to 3-0 to start the season as they hold out the Roosters 24-20. Roosters had plenty of chances late but Dogs held them.
Injuries: David Stagg (Concussion), Ben Barba (Arm), Sam Perrett (Ankle), Frank-Paul Nu'uausala (Knee)
2011 @NRLTweet Player of the Year Votes
Judge: M Spillane
4 - Corey Payne, CBY
Payne was channelling Paul Osbourne from the 1994 GF with some great offloads leading to tries.
2 - Ben Barba, CBY
Making the number 1 jumper his own. Bagged 2 tries, a try assist and ran for 144m.
1 - Anthony Minichiello, SYD
Easily the Roosters best with a vintage display from Mini. Had a try assist and ran for 146m.
Judge: M Tsialis
4 - Trent Hodkinson, CBY
Handles himself like a 10 year veteran rather than a player that should be suffering from second year syndrome.
2 - Corey Payne, CBY
The offloads are finally starting to stick! His few miracle passes were amazing.
1 - Braith Anasta, SYD
Never gave up, and kept toiling for his team in the back row.
GAME HIGHLIGHTS
|-| |-| |-|

7:05pm (Local) 28 March @ Dairy Farmers Stadium, Townsville.
NRLTweet Game Summary: North Queensland smash the Storm 34-6 in the Townsville wet in MNF. Thurston & the young brigade turn it on.
Injuries: Kalifa Fai-Fai Loa (Shin), Dane Nielsen (Concussion), Kevin Proctor (Eye Socket), Sika Manu (Ankle)
2011 @NRLTweet Player of the Year Votes
Judge: B Hoese
4 - Johnathan Thurston, NQL
Very strong kicking game and an even better passing game. In control, playing a near perfect halfback's game.
2 - Matthew Bowen, NQL
Constantly sniffing around the ruck. Outplayed his opposite number 1 in every aspect. Bagged a double.
1 - Ashley Graham, NQL
Always in the right place at the right time. Linked up well with Thurston to score 2 tries. Put his body on the line several times.
Judge: W Nicolson
4 - Johnathan Thurston, NQL
Still one of the best in the business at turning the screws on a team when he's got the lead. Set up the match sealing try for Ashley Graham and produced another two after that (to Bowen and Graham again) but it was his general play kicking when they had an early 10-0 lead that was decisive. Also didn't get exposed in defence.
2 - Kalifa Fai-Fai Loa, NQL
The crew at NOT The Footy Show has been calling for the Fe Fi Fo Fumster to play 1st Grade for a while now and we weren't disappointed. Got through a heap of grunt work and set up the second try with a sensational kick return to get the Cowboys ahead by 10 early in the match.
1 - Matthew Bowen, NQL
How do you know Matt Bowen is back to full health? It's not his tryscoring feats (2 more tonight) but his willingness to run the ball back at full speed on kick returns. His support play also was top notch for his first try.
GAME HIGHLIGHTS
]-[ [-] ]-[

NOT THE FOOTY SHOW's EXPERT TIPS:
ROUND 3 SELECTIONS 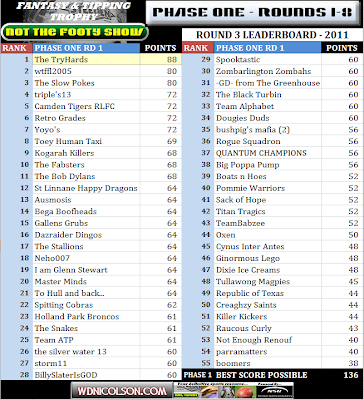 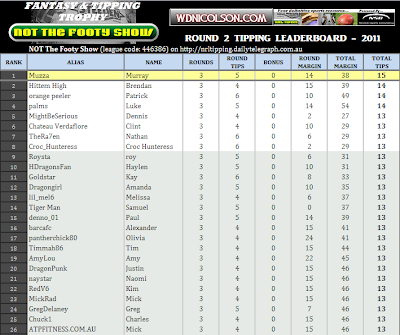 |-| SO GO OUT AND ENJOY THE FOOTY!
By W D Nicolson