The footy is back.

Here on www.wdnicolson.com we've got all the Game Results, Match Reports, Game Highlights, Game Stats, Injury News & NRL Tweet Player of the Year Votes in the one place.
This Round Review also integrates our NRL Injured List - which if you haven't bookmarked by now - I suggest you do so.
This year not only do you get The NRL Tweet's Tips each week but the whole NOT The Footy Show team will have their picks listed by Thursday so you can back a smoky or a favourite by seeing who we all picked (or didn't pick). We make no promises that we'll get everything right but at least one of us should be good for a lazy 60-65% success rate in 2011.

Fri @ SFS | GAME STATS
NRLTweet Game Summary: South Sydney lose it... then win it & immediately lose it again as the Roosters (who led 28-6 after HT) strike late to win 40-29 at SFS.
Injuries: Sam Burgess (Shoulder), Ben Lowe (Fractured Foot), Scott Geddes (Achilles Tear)
2011 @NRLTweet Player of the Year Votes
Judge: W Nicolson
4 - Mitchell Pearce, SYD
In everything early as the Roosters built a big lead. But his best contribution was late in the game when the Roosters had regained the lead - had two clearing kicks that found touch deep in the South Sydney half.
2 - Braith Anasta, SYD
He's become a consistent football player in the last 12 months. Another good performance from the skipper and who knew he was such a sharpshooter with the boot?
1 - Issac Luke, SOU
Had a go - the same of which cannot be said for some of his team-mates, and was a constant threat around the rucks. Although he missed the kick that would have given them the lead one has to wonder why the guy who had 4/4 on the night didn't take it instead.
Judge: M Tsialis
4 - Mitchell Pearce, SYD
Controlled every aspect of the game with ease. Kicking game was awesome and troubled South Sydney all night.

2 - Tom Symonds, SYD
Great to see Tom back from a difficult year in 2010. Has bulked up and did well to score two tries and make a line break.

1 - Mose Masoe, SYD
Best forward on the park, making 129 metres in just over half an hour. Played with no fear.

2 - Johnathan Thurston, NQL
The conductor of the show. For the first time in a long time he had the NQL Pack defending and running with some form of structure.
1 - Josh Hoffman, BRI
Kept the Broncos in the game with some copybook Fullback tackles.
Judge: M Spillane
4 - Johnathan Thurston, NQL
Controlled the game beautifully, guiding the Cowboys around and had a hand in several tries.

2 - Matthew Bowen, NQL
Was the Bowen of old. Got the Cowboys sets off to a great start with some great returns.

1 - Josh Hoffman, BRI
Looked the most dangerous as the Broncos almost came back to win the match.

Sat @ Eden | GAME STATS
NRLTweet Game Summary: The Eels stun the Warriors at Eden Park, getting out to a 24-6 lead after 57 minutes, then holding on 24-18. Kearney's Kids 1 from 1.
Injuries: Manu Vatuvei (Knee).
2011 @NRLTweet Player of the Year Votes
Judge: C Buchanan
4 - Luke Burt, PAR
Scored two tries, had a good night with the boot, as well as defending well including under contested bombs.
2 - Jarryd Hayne, PAR
Scored a try and was all over the place making some good runs and tackles.
1 - Jerome Ropati, WAR
The single shining light for the Warriors, scored a double the second was simply magic.
Judge: H Southon
4 - Tim Mannah, PAR
Made the most of his starting opportunity, with Cayless retiring last year. Ran for 80 metres off 12 hit ups in the first half. Provided the platform for Parramatta.

2 - Casey McGuire, PAR
Provided a real spark and direction from dummy half. Gave great service to his forwards and halves, and made some valuable metres out of hooker.

1 - Mitchell Allgood, PAR
Made his first grade debut. A phenomenal work rate in the first half complimented the work of Tim Mannah in achieving the great go forward that Parramatta achieved.

Sat @ Skilled | GAME STATS
NRLTweet Game Summary: The Dragons just keep winning. This time the Titans are no match for the Premiers & Phil Haines' shoulder; Dragons win 25-16 at Skilled.
Injuries: None to report yet.
2011 @NRLTweet Player of the Year Votes
Judge: J Davies
4 - Jamie Soward, STI
Controlled where the ball went at all times and set-up three tries.

2 - Darius Boyd, STI
Scored two vital tries to put the game out of the Titans reach.

1 - Dan Hunt, STI
Continually hit the ball up and will be a key figure in the Dragons going back to back.

Judge: M McLucas
4 - Darius Boyd, STI
Picked up where he left off last season with another "everywhere" performance. Always looked dangerous on backline moves and always in the right place in defence. 2 tries to cap it off after combining well with his halves.

2 - Jamie Soward, STI
Took control of the second half and produced a perfect kicking game. Kicks in play found space and attacking kicks resulted in 3 tries, even though 1 had a shade of luck.

1 - Ashley Harrison, GLD
Doesn't know the meaning of the word tired. Clocked up nearly 50 tackles and made good metres with ball in hand. Rewarded with a try from a Prince grubber.

2 - Cameron Smith, MEL
Controlled the game beautifully for the Storm, really plugged the middle third with 44 tackles and running for 66 metres from dummy half.

1 - Anthony Watmough, MAN
Watmough was the stand out in a sluggish Manly team. Making 27 tackles and running for 155 metres and breaking 8 tackles.

Judge: W Nicolson
4 - Billy Slater, MEL
Didn't play a trial but you wouldn't have known given how influential he was on the result. Wasn't the best game of his career or anything but when he got involved he made a difference.
2 - Cameron Smith, MEL
Controlled the rucks and made a heap of tackles. Just never gets flustered and remains the glue that holds the team together.
1 - Anthony Watmough, MAN
Still can make an error and give away a penalty with the best of them, but Watmough was also Manly's most dangerous player. Still living on the left edge despite being the kind of player who might make a better contribution in the middle.
GAME HIGHLIGHTS
]-[ ]-[ ]-[

Sun @ Canberra | GAME STATS
NRLTweet Game Summary: Canberra run riot over the Sharks up the middle & on the edges as they cruise to 40-12 win. Dominant win without Dugan, Campese & Orford.
Injuries: Joe Picker (Thigh), Alan Tongue (AC Joint), Brett White (On Report - Raised Knee), Albert Kelly (Concussion), Paul Aiton (Headbutt - Sent Off).
2011 @NRLTweet Player of the Year Votes
Judge: W Nicolson
4 - Sam Williams, CAN
Outstanding on debut. His kicking game was very good (including a huge 40/20) and he took the line on when he needed to. Most importantly - ceded to his senior halves partner McCrone when he had to.
2 - Josh McCrone, CAN
His best game in first grade. Looked comfortable at five-eighth and picked his moments. Like Williams had a strong kicking game.
1 - Blake Ferguson, CAN
Canberra may have lost Joel Monaghan's aerial ability but Ferguson's performance in the air against Cronulla suggests they might have a better set of hands on the wing this year. Very good.
Judge: D Neville
4 - Sam Williams, CAN
What a debut game for the young half back, set up tries, good kicking game and good vision.

2 - Josh McCrone, CAN
Played well behind that awesome forward pack like any good half back would.

1 - Tom Learoyd-Lahrs, CAN
Could have been any one of Raiders forwards - went with Learoyd-Lahrs as some of his hit ups were just WOW!

Judge: R Neilsen
4 - Jarrod Mullen, NEW
Had 12 kicks for 400 metres, scored a try and lead the team confidently when Gidley left the field with injury.

2 - Josh Morris, CBY
A great shame he picked up a knee injury because he looks back to his rampaging best. Running over Liam Fulton was a highlight.

1 - Robert Lui, WTG
Everyone’s talking about Benji but Lui troubled the Dogs every time he ran at the line. Made a couple of errors but looks to be the long term halfback solution.

Judge: W Nicolson
4 - Josh Morris, CBY
Canterbury's most dangerous player scored the first try (an 85m effort) and laid on the match winner for Kris Keating - both from long range. Limped off late with a leg injury but it appears Kevin Moore remembered how valuable Morris is during the off-season and got him the ball.
2 - Benji Marshall, WTG
Three of the nicest scoring plays you'll see all season came from Marshall. Sent Tuqiri over with a cut out pass, popped a short ball for Lawrence to score then stepped half the Bulldogs to score the try that got the Tigers back within 4 points.
1 - Aiden Tolman, CBY
Outstanding work rate (20 runs 46 Tackles) and played 71 minutes. Canterbury let Ben Hannant go because this kid is the genuine article and simply put a quality front rower.
GAME HIGHLIGHTS
]-[ ]-[ ]-[

Note: The NRL Tweet finished with 125 correct tips from 192 Games in 2010 at a strike rate of 65% (But of course that was probably a total and utter fluke)

NOT THE FOOTY SHOW's EXPERT TIPS:

Eyes, The Kid Who Sees All

NOT THE FOOTY SHOW LEAGUE LEADERS
Click to Enlarge 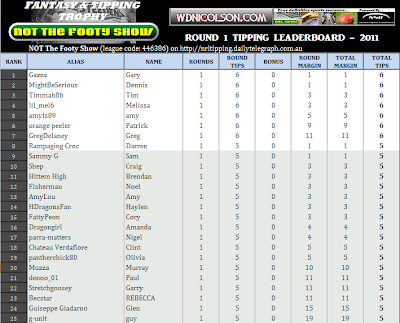 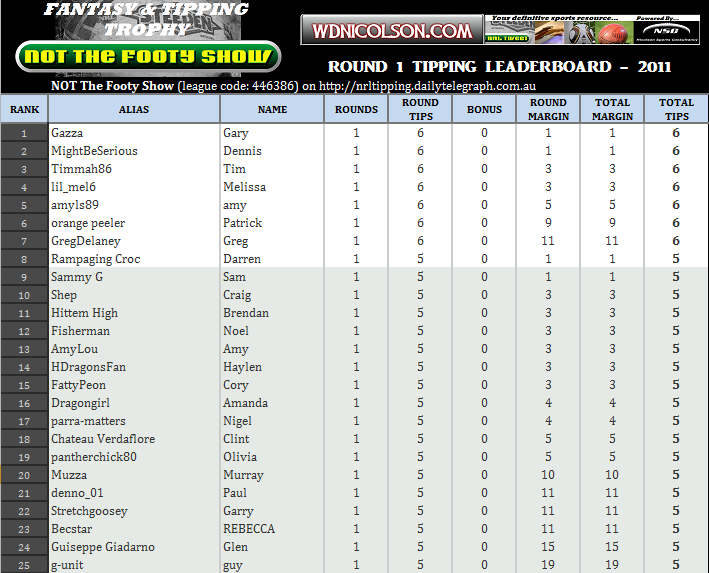 WHAT WERE YOUR THOUGHTS ON ROUND 1? Why not COMMENT below?
By W D Nicolson