Here are The NRL Tweet's Game Notes, Video Highlights & Results from Round 20 of the 2010 NRL Premiership.
(Subscribe to the NOT The Footy Show Podcasts via iTunes HERE)
|=| Now you can't say NOT The Footy Show didn't warn you... The Hayne Train is BACK!
Jarryd Hayne produced perhaps the best individual performance in the opening 11 minutes of any game - EVER - as Canterbury's season was steamrolled by the Parramatta fullback.
Just in case you haven't see our tom foolery... we stand by it - Hayne is bringing the pain once again in 2010.
NOT The Footy Show is back onboard The Hayne Train!
Round 20 saw the Newcastle Knights fall out of Semi Final contention with a Golden Point loss to the Cowboys in Townsville, while Canberra, South Sydney & Parramatta kept their heads above water in the race for the Top 8. Brisbane's stunning loss to an under-strength Roosters outfit on Monday Night also saw the Broncos drop out of the Top 8 - when a win would have had them in the Top 5.
There's plenty of great action from Round 20 of the 2010 NRL Premiership in the highlights below - and this is just about the only page on the internet you can find them all collated for easy access.
|=| Here are the NRL Tweet's Game Notes plus Video Highlights from whichever YouTube Channel is still operating before the NRL shuts them down |=|
|=| |=| |=| 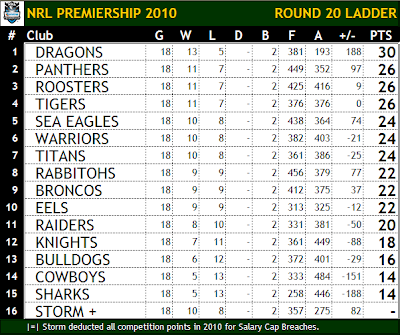 ROUND TWENTY OF THE NRL PREMIERSHIP SEASON 2010
For an easy to print .pdf of all the lineups named Tuesday click here.
|=| FRIDAY

|=| The NRL Tweet's Game Notes From ANZ: See Results Article on Monday.
#NRL Recap: Jarryd Hayne has the best 11 minutes to start a game in living memory - sets up Parramatta's eventual 32-16 win over Canterbury at ANZ.
|=| The first 11 minutes of this game were simply incredible. First Jarryd Hayne scored a freakish individual try from Parramatta's opening set of six, then Hayne scored again backing up a line break he set up in the 6th minute and then he laid on a wonderful cut out pass for Krisnan Inu's try to make it 16-0 Parramatta after just 11 minutes. Canterbury had no answer to the opening onslaught and even though Brett Kimmorley scored a soft try in reply 6 minutes later - the horse with Hayne on its back had bolted. Parramatta and Hayne clocked off after halftime when the Eels led 28-4, which allowed the Bulldogs to get it back to 28-16 but two late and dubious penalty goals later to Luke Burt and it was 32-16 at fulltime. Canterbury's game plan is ridiculously narrow minded given the talent they have out wide and when you compare that to an Eels side that throws it around with the sole purpose of scoring tries - you have to applaud them for it. Canterbury's season is now over, Parramatta's may have just begun.

|=| The NRL Tweet's Game Notes From WIN Jubilee:
#NRL Recap: Mat Rogers pulls out a sneaky dummy half field goal in Extra Time to lift the Gold Coast Titans to stunning 11-10 win over the Dragons.
St.George-Illawarra have a problem... and it is the same problem they had last year - no game breakers when the game needs to be won. The Dragons can win a game they have a lead in and their grinding style just chokes the life out of most oppositions in the 2nd half... but against the Titans they couldn't break the game open when they needed to - and Mat Rogers snuck into dummy half during the second period of extra time and killed them with a classy snap at field goal. It's not all doom and gloom for the Dragons who are still 4 points clear at the top of the Minor Premiership but the Titans were down on troops and had the big play when the Dragons didn't. Coach Wayne Bennett knows it'll take some time for Mark Gasnier to find his feet but will he be able to change games from right centre? The Dragons season will rest on Jamie Soward & Ben Hornby being able to take their playmaking to a new level... we haven't seen it yet. Kudos to the Titans who won a game no-one expected them to and moved one spot up the ladder into 7th.

|=| The NRL Tweet's Game Notes From Canberra:
#NRL Recap: Canberra win 20-13 but are fortunate to have been playing Cronulla who simply lack the class to take advantage of a woeful Raiders performance.
|=| If not for Daniel Vidot's finishing skills, Travis Waddell's best game as a Raider and Tom Learoyd-Lahrs strong runs - this game had nothing going for it. The Raiders continue to split their halves to zero effect and Terry Campese's influence on a game is way below the level you need from your key playmaker. The Sharks just try hard but have little to no idea in attack and the off-season can't come quick enough for a bunch of tired and busted bodies who must see very little light at the end of the 2010 season tunnel given the way they try and still don't look like winning. Canberra remain an outside chance at the Finals but Cronulla look set to collect the unofficial wooden spoon.

|=| The NRL Tweet's Game Notes From Dairy Farmers:
#NRL Recap: Newcastle's playoff hopes end in Extra Time going down 28-24 to the North Queensland Cowboys in Townsville.
|=| Cowboys winger Will Tupou scores a sensational try 2 minutes into the extra frame beating Kurt Gidley one on one and sending the Dairy Farmers crowd into a frenzy. Newcastle had only drawn level thanks to a Gidley sideline conversion in the final minute of play but he couldn't pull off the tackle that would've saved his team's season. North Queensland's victory drags them off the bottom of the ladder (15th is the new spoon) on differential over Cronulla. Newcastle are on 18 points with 6 games to play - so mathematically they can reach 30pts and that would get them into the Top 8 - but they have a terrible draw and picked up half a dozen injuries to key players in this loss.

|=| The NRL Tweet's Game Notes From AAMI:
#NRL Recap: Penrith drop their 3rd straight game - this time at the hands of the unpredictable Melbourne Storm who score two tries in the final 15 minutes to win 18-10.
|=| Despite the loss the Panthers hold onto 2nd spot on the ladder but they are a shadow of a side without key playmakers Luke Lewis & Luke Walsh. All the talk that relying on kicks wouldn't be an issue from the Panthers... has become an issue as the team has had ample field position in all their losses since knocking off the Dragons. Melbourne will remain a factor at home for the rest of 2010 - playing in front of their loyal fans - but they will be risky selections on the road given the way they are playing.

|=| The NRL Tweet's Game Notes From ANZ:
#NRL Recap: South Sydney score 28 points after halftime to reverse a 20-10 deficit against the Warriors and win the game 38-28 at ANZ.
|=| Sam Burgess was a standout playing 67 minutes in the front row and not being spelled until the 60th minute. He is one heck of a player. Chris Sandow had his best game of the season as he helped drive the Rabbitohs 2nd half onslaught - picking up a try and kicking 5/7 goals. The Warriors were below their best in the 2nd half and the defensive steel that had been there in their 5 match winning streak deserted them. The downside of the South Sydney victory was a long term collarbone injury to Dave Taylor & a cork for strike centre Beau Champion. The win puts South Sydney back into the Top 8 because of their superior differential of +77. The Warriors are 6th but a loss next week to the Gold Coast would see them possibly drop out of the Top 8.

|=| The NRL Tweet's Game Notes From Bluetongue:
#NRL Recap: Manly flexed their muscles in this one - coming back from 8-0 down in the 1st half to run over the Wests Tigers 38-20 in front of a full house in Gosford.
|=| Jamie Lyon combined with young halves Trent Hodkinson & Kieran Foran to expose a shaky Tigers defence as the Sea Eagles piled on 6 tries. Up front Manly's pack won the ruck and the Tigers couldn't contain the Sea Eagles on the edges. The Tigers had been winning games recently but hadn't played particularly well for the last month and that lack of form caught up with them here. The good news for the Tigers is when Gareth Ellis returns they are a much better and tougher unit - but Benji Marshall's kicking woes must be rectified if the Tigers have dreams of a September surge. The issue out of this game was Manly's Steven Matai playing doctor after leveling Robbie Farah with a high tackle and then Anthony Watmough of all people telling Farah to 'go get a brain scan'...

|=| The NRL Tweet's Game Notes From Suncorp:
#NRL Recap: How good were the Roosters tonight? Even after the Broncos came storming back - Carney lays on Kenny-Dowall's 4th try for a 34-30 win!
This was the Todd Carney show at Suncorp Stadium. The guy we wanted at five-eighth for the NSW Blues from Game One (check the tape - we've been Carney for NSW heralds for months) carved up a well rested and heavily favoured Brisbane side who were expected to tear the Roosters apart when Nate Myles & Mitchell Pearce were late scratchings. Carney was so good he relegated a guy who scored 4 tries in a winning team (Shaun Kenny-Dowall) to a distant 2nd in the Man of the Match Award. Big win for the Roosters who showed that mentally their win over the Bulldogs last week has taught them despite the odds or the flow of the game - they can win. Although the Broncos scored 4 tries in 15 minutes to take the lead sensationally with 10 to go... it was that man Carney who stepped up and delivered - sealing a dramatic but well deserved 34-30 win for the Roosters. Brisbane need to shrug this off and get ready for the Dragons next Sunday, while the Roosters face a similarly tough task against Parramatta on Saturday Night.

1. Waz & guest host Dave still talking league... we'll shut up in October.
2. Kick The Show Off with our rendition of 'The Hayne Train!' Get the video on YouTube.
3. We go into the whole Salary Cap, Greg Inglis, Policing of the Cap etc in detail in one mighty long segment - but we also raise the idea of a Public Salary Cap.
4. Ricky Stuart - What is his legacy thus far as a coach & what does the future hold?
5. All the Round 19 Moments in detail... Did Kevin Moore's decision to bench Ben Barba cost the Dogs a playoff spot?
5. Some More Talking Points This Week:
a. Why Julia Gillard's catchphrase 'moving forward' & Tony Abbott's 'budgie smugglers' are banned from all future NOT The Footy Show Podcasts
b. Matt Vickers asks The NRL Tweet: Are the Titans & Rabbitohs done?
c. Rugbystique wants to know why the refs still can't get it right more often than not?
6. A full rundown of how the NRL Tweet Player of the Year Leaderboard looks after 19 Rounds
7. Plus all our Tips & In-Depth Previews of NRL Round 20 + Our Tipping Records + But you'll have to see the video for our Special Fried Rice Picks this week.
8. Check it out on iTunes now!