Before this article kicks-off let me make one thing abundantly clear - Johnathan Thurston is a fantastic Rugby League Player.

But is he the best player in the game today? 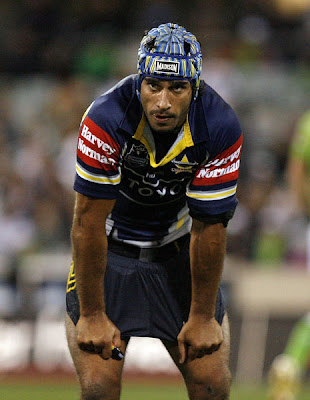 That's not from a lack of talent or accomplishments at the elite level of the game - he's done everything you can at representative level - but the reason you cannot bestow that label on the 27 year old North Queensland captain is a distinct lack of impact at the NRL level in recent seasons. To compound things, the Cowboys lack of success is now mixing with an on-field persona that is, quite frankly, disappointing.
Thurston is perhaps the most gifted natural ball player in the game but he is a player who can look untouchable as a front-runner and utterly impotent when his side is struggling.
For all the talk about how good North Queensland are on paper every year - they have one Grand Final appearance in 2005 (Thurston's first year at the Cowboys), one Preliminary Final appearance in 2007 (when Thurston & Bowen carried the Cowboys in September) and have missed four Finals Series in Thurston's six seasons at the club.
When you then re-consider the quality of the players that the Cowboys have put on the field with Thurston over that time - there must be a massive sense of underachievement in North Queensland.

When North Queensland fans see Thurston play representative football there must be a mix of joy and bewilderment as their prized halfback is a world beater amongst the game's elite. But when he comes back to the NRL level - he just can't get the Cowboys across the line and while his competitiveness has always been there too see on the field for a few years now - in the last 12 months we have seen his competitiveness turn to despair and frustration as his efforts fail to lift the team he is expected to win games for.

In Round 12 against the Manly-Warringah Sea Eagles we saw Johnathan Thurston finally lose it and remonstrate with referee Jason Robinson over a late forward pass call that stopped a late Cowboys charge to victory.

Here is the video of that incident... 37 seconds in is the start of the Thurston rant towards Robinson.


Incredibly Thurston was charged for dissent and then cleared on the basis that the referee - Jason Robinson - had not taken further action on the field (ie. sent Thurston to the sin bin) and thus, Thurston's lawyers argued, what Thurston had said did not warrant a suspension.

Thurston therefore avoided the only kind of penalty that truly makes it through the skull of a footballer (not playing because of what you did) - and was free to play in Queensland's record 5th straight State of Origin Series Victory.

Thurston said all the right things in the wake of his exoneration but it was apparent he didn't comprehend that what he did was wrong - in fact for him to say to youngsters to 'respect referees' in the wake of dodging suspension for failing to do just that was laughable.

Now we had a case in the Round 21 game against Penrith - of Thurston having his team penalised while in possession after he blew up at referee Tony De Las Heras for not giving the Cowboys an advantage after a Frank Pritchard knock on. Senior referee Steve Lyons let Thurston have his say but it was clear Lyons was not overly pleased with how Thurston had ripped into De Las Heras and the penalty stood.

When you consider how lucky Thurston had been in avoiding his suspension in Round 12 - one can only wonder if Thurston feels like he can get away with almost anything now.

In fact in the Daily Telegraph on Saturday July 31, Thurston had this to say about the incident:

"I was just asking him (De Las Heras) where the advantage was," Thurston said. "They (Penrith) knocked it on on the 20 and then we are camped five metres out from our own line."
Thurston was adamant his outburst was not deserving of a penalty but said he did not know if he used foul language when addressing the referee.
"I am not sure," he said. "It all happened so quickly. He said 'you had your arms out like this' and I just asked where our advantage was."


While you can't argue with Thurston that his side didn't get much of an advantage out of the Pritchard knock on (even though it was knocked out of his grasp by Cowboys second rower Leeson Ah Mau), the fact he cannot recall whether or not he swore at De Las Heras doesn't paint Thurston in the greatest light as a player who was in control of his emotions.
Again Thurston is a wonderful player and his pass earlier in the game to Willie Tonga was a thing of beauty but the NRL digs its own grave with its star players because they let them avoid responsibility when it is warranted. 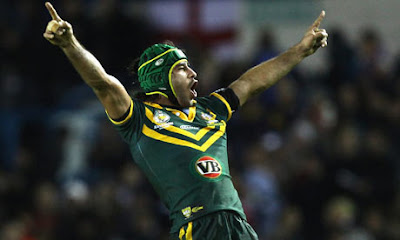 Perhaps most telling aspect of the Penrith game is that the lead story emanating from the night is not the fact the Cowboys have just five wins in 2010 but that Johnathan Thurston still doesn't appear to understand that just because he's the Golden Boy of Rugby League at Representative level, things are different at club level and just because he's on the field doesn't mean that's enough for his team to win.
Understand that the point of this article is to highlight how the NRL can do more harm than good by protecting their superstars. The by-product of this is the North Queensland Cowboys can't take a trick down at NRL level because their superstar player is frustrated with the lack of results he is delivering to a team everyone expected to go so much better with him at the helm.
Watching Thurston on NRL Tactics in a one on one interview with Andy Raymond - you can see he's a affable bloke but there can be no doubt whatsoever that when he steps on that Rugby League field at club level - the weight of expectation (his own & of others) coupled with his status in the game does not result in the same Johnathan Thurston we see in the rep arena. 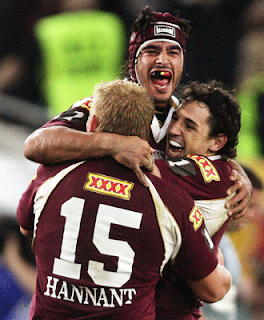 Again - there is no doubt that Johnathan Thurston is a brilliant footballer but his recent track record with the North Queensland Cowboys is nowhere near the level expected of a player with the tag of 'best player in the game'. Because regardless of how many Dally M Awards one may have - all people truly respect is winning and Thurston simply hasn't been able to get the job done at the Cowboys for the last three seasons.

Until he can arrest the Cowboys slide come 2011 and in the process find a change in attitude towards referees - he will not be considered the best player in the game in my books.

Perhaps the saddest aspect of Thurston's current situation is the NRL's softly softly approach with the temperamental elite in the game doesn't help his situation one iota.

Because when you consider the on-field demeanor of a Darren Lockyer vs a Johnathan Thurston - there is a truly extraordinary gap.
By W D Nicolson