Since April 22, 2010 - the Rugby League World has been stunned by the revelations that the Melbourne Storm Rugby League Club had significantly breached the NRL's Salary Cap and had been stripped off their two Premierships in 2007 & 2009.
The breaches were well disguised from 2006 onwards and although we learned of the cap rorting from the NRL in April - the full investigation into what had actually been taking place was yet to be confirmed.
Today, Thursday July 15, News Limited's John Hartigan & Peter Macourt fronted a press conference to disclose a summary of the findings from accounting firm Deloitte's investigation into the Salary Cap Breaches by the Melbourne Storm Rugby League Club. 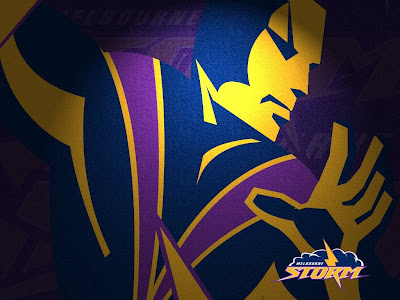 NOT THE FOOTY SHOW'S REACTION TO THE DELOITTE FINDINGS
PODCAST:

VIDEO:
In short, here are the findings of the Deloitte Investigation into the Melbourne Storm's Salary Cap Breach are:
Update 2pm - NRL CEO David Gallop said at a press conference that he is surprised at the final figure of the Storm's Salary Cap breach but the NRL's punishments will remain in place.

Update 2:45pm - Rather impressively the Melbourne Storm's Official Site has a comprehensive breakdown of the Deloitte Findings - you can view it here on their site or see it below.

A full recap of these findings plus our own insight into what the future holds for the Melbourne Storm will be available in NOT The Footy Show Podcast & Video. (Both will be uploaded to this article when finished).

Make sure you subscribe to the podcast & check out the rest of the content here on wdnicolson.blogspot.com
For more excellent coverage on the Melbourne Storm Salary Cap Fall-Out check out the Sydney Morning Herald.

News Limited today received a report of summary findings of the forensic investigation by independent accounting firm Deloitte into the salary cap breaches by the Melbourne Storm Rugby League Football Club.
As a result of Deloitte’s report, News Limited estimates that the total value of salary cap breaches by the club between 2006 and 2010 is up to $3.170 million, an approximate 83% increase on the original NRL estimate of $1.735 million.
This amount could be lower or higher because players, managers and other third parties opted not to provide information to Deloitte or News Limited during the investigation. However, News Limited believes it is most unlikely that the amount will be materially lower.
The breaches are significantly higher than first estimated by the NRL in each year between 2006–2010, including in 2007 and 2009 when the Melbourne Storm won the NRL Premiership.
The original estimated breach for the 2010 season by the NRL of $700,000 has blown out to a possible $1,027,968, an increase of 47%. This amount could be lower or higher if further information is provided.
The estimated likely excess of player financial commitments over the salary cap of $4.1million for 2011 is $1.325 million, and again, as not all parties have fully co-operated this number could be higher or lower.

A year by year comparison between the original NRL estimates of the Storm’s salary cap breaches and the findings of the Deloitte investigation are shown on the following table. 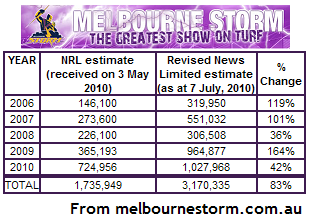 Recent NRL Salary Cap Changes
On 22 June 2010, the NRL announced an increase in the salary cap of $100,000. If this change is taken into account, News Limited expects that the Melbourne Storm is forecast to be a possible $1,225,188 over the salary cap in 2011.

The 2007 and 2009 Premierships
There have been media reports that people associated with the club believe the NRL should reinstate the 2007 Premiership, based on a belief that the estimated breach of the salary cap in 2007 was about $273,000.
Those calling for the reinstatement of the 2007 Premiership have noted that the club’s salary cap breach in 2007 was similar to the breach by the club in 2003 of $261,912 and that the penalty for that breach was a fine of only $130,956.
Following the forensic investigation, it is News Limited’s view that the actual breach in 2007 was an estimated $551,032, 110% higher than the breach in 2003.
Similarly, News Limited now believes that the actual breach in 2009 when the Storm won the Premiership was an estimated $964,877, higher again than the breach in 2007.
Combined with the fact that the breaches occurred over 5 years, the findings made by Deloitte reinforce News Limited’s view that the penalties were appropriate.
NRL Contracts and “Side” Letters
In certain cases, the Storm appears to have maintained a dual contract system with formal contracts lodged with the NRL supplemented by “side” letters between the club and some players that guaranteed additional payments and benefits.
A file containing three “side” letters of offer to three players was obtained by News Limited from a file retained by the former acting CEO of the Storm Matt Hanson.
The “side” letters include amounts to be paid to the players that are well in excess of the amounts in the contracts for the same players that were lodged with the NRL.
The letters include guarantees of payments to the players via third parties. A guarantee of a payment to a player via a third party should be counted under the cap.
All three letters are signed by former Storm CEO Brian Waldron.
It has not been established whether the players who received these letters, were aware that the additional commitments in them were not disclosed by the club to the NRL nor if they contributed to the club breaching the cap.
It is not known if other players received or signed “side” letters offering them payments and benefits in excess of their formal NRL contracts.

NRL Contracts and Letters of Offer
Other additional payments were discovered by comparing letters of offer provided to certain players with the formal contracts of these players that were lodged with the NRL.

Methods of Payment
Based on the forensic investigation, News Limited believes that many of the additional payments and benefits to players were either not disclosed or were recorded but not accurately described in the club’s books and records.
The main method of payment involved the club arranging for third parties to “employ” and/or pay players. The third parties issued invoices to the club for amounts described as “donations” or “consulting fees”. The club paid the invoices and they were recorded in the accounts as “donations” or “consulting fees” and not as payments to players.
Other methods and structures that have been identified included:
• Guaranteeing the value of third party agreements, where these could not be sourced for a player by the club;
• The provision by sponsors and other third parties of fully serviced and maintained motor vehicles to players or player family members;
• Providing gift vouchers to players. The vouchers were purchased by the club using frequent flyer or credit card reward points that were accumulated by club managers. A register recording the distribution of gift vouchers was found during the investigation;
• Providing rental assistance to help players pay for residential accommodation;
• Airfares for personal travel by players and their immediate family members that were paid by the club;
• Providing other benefits such as payments for a boat and media training for players;
• Underwriting and guaranteeing payment of an amount equal to the value of a television broadcasting contract for a player so that the player would be paid regardless of whether the television contract materialised.

Parties interviewed
Coach
Melbourne Storm coach Craig Bellamy was interviewed by Deloitte on 17 May 2010.
News Limited does not believe that Mr Bellamy was aware that the club was in breach of the NRL salary cap or that he knew what amounts individual players were paid, either by the club or by third parties.

Player Interviews
On Friday 14 May, at Deloitte’s request, the club set up appointments so that Deloitte could interview certain players individually at appointed times on 17 May. None of the players turned up for their interviews that day.
Further requests by Deloitte to interview those players have either been ignored or declined by the player or their manager/agent.
In two cases, a player manager/agent agreed that Deloitte could interview their client but subsequently no arrangements were made by the manager/agent for the interviews to occur.
A number of player manager/agents requested Deloitte to provide a list of documents sought in writing to which Deloitte subsequently received no response, with the exception of one player manager of a former Storm player.
Deloitte made numerous subsequent efforts to secure the cooperation and involvement of those players via letters and email requests to player managers/agents and through representations made to players via club employees, including the club’s acting CEO Frank Stanton.
Deloitte provided individual player manager/agents with a Confidentiality Agreement that obliged Deloitte to maintain confidentiality of any information provided by the player or their manager/agent. This Agreement was accepted by the Rugby League Players Association. None of the players or their manager/agents agreed to sign the confidentiality agreements or agreed to further requests for interviews.
A further meeting between Deloitte and most players was held at the club on 9 June at which Deloitte again sought cooperation from the players and asked the players to provide copies of their NRL contracts, copies of any letters of offer from the club and copies of any other agreements between players and any third party. Deloitte has not received any of the documents requested.

Executive Interviews
Offers to attend a voluntary interview with Deloitte were extended to Brian Waldron, Matt Hanson, Paul Gregory and Peter O’Sullivan. However none of these people agreed to be interviewed. Hanson attended an initial meeting and agreed to answer written questions. Cameron Vale was interviewed by Deloitte on 20 May 2010.

Background
On 22 April 2010 the National Rugby League found that the Melbourne Storm Football Club had breached the salary cap by an estimated $1.7 million over 5 years between 2006 and 2010.
The NRL stripped the club of its 2007 and 2009 Premierships, its 2006, 2007 and 2008 Minor Premierships and all competition points for 2010, and fined the club $500,000 and forced it to return $1.1 million in Premiership prize money. Melbourne Storm has commenced proceedings challenging the imposition of those penalties. The NRL is defending those proceedings.

The Investigation
Deloitte was appointed by News Limited to conduct a forensic examination of the club’s financial affairs on 22 April, 2010. A team of 5 investigators from Deloitte began work at the club’s premises the next day. The investigation was concluded on 6 July 2010.
Deloitte interviewed 18 people; 16 people associated with the club and two people from the NRL. A large number of people, including players, player managers and agents, independent directors of the club and third parties declined to be interviewed or provide information to Deloitte.
The findings are therefore based on information provided during the interviews and on a wide ranging and comprehensive review of the club’s accounts, electronic records and hard copy documents at the club and some found elsewhere. In total, electronic records produced by 28 people that were stored on hard drives, back-up tapes, desktops, laptops and portable media devices were part of the original scope of the investigation with the records pertaining to 12 people analysed in further detail.
In total, more than 163,000 individual documents were reviewed as part of the investigation.
In conducting the investigation, Deloitte has interpreted the NRL rules and regulations as published in the relevant periods of the investigation. Deloitte are not NRL salary cap auditors and therefore their conclusions may not be the same as those reached by the NRL Salary Cap Auditor – where possible, Deloitte have sought to clarify any matters with the NRL Salary Cap Auditor.

A detailed report from Deloitte has been issued to News Limited. The report includes a number of schedules detailing payments to players and a detailed description of the assumptions used by Deloitte in interpreting the NRL Salary Cap Rules.

Deloitte has also provided News Limited with copies of letters, emails, email attachments, contracts, letters of offer to players and other records that are evidence of the findings.

Comment: Full credit to the Melbourne Storm for publishing this summary - it certainly is worth reading two or three times.
By W D Nicolson