Could this be the Australian Kangaroos Rugby League Team for the ANZAC Test? 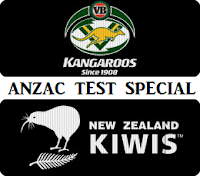 Get the 2011 ANZAC Test Teams & Video Preview Here
Darren Lockyer will return to the representative arena for one last time in 2010 and fitness-permitting he will skipper the Australian Kangaroos for the first Test Match of the season against the New Zealanders on Friday May 7 at the new AAMI Park in Melbourne.


>>>UPDATE May 2 - The Australian team was named Sunday May 2. It is as follows:

Our predicted team below had 11 of 17 correct... but Josh Morris & Ben Hannant were both unavailable through injury (injured after our predicted team) and Israel Folau's flirtation with Union & AFL broke after this team was published - he was snubbed apparently from the Test Team due to this... but it may have just been on form. David Shillington & Josh Perry are the 'bolters' in the sense - they should feel fortunate to be asked to carry other members of the team's boots to training - let alone play in the game.
Nate Myles is the big snub and Ben Creagh can count himself unlucky.
The New Zealand 18 Man Squad is:

Australia swept to the Four Nations title in 2009 but injury and the poor form of some players may see a different lineup to the side that took out the decider against Great Britain 46-16 with an avalanche of points in the final 20 minutes. 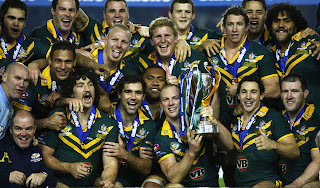 The Kangaroos side for the Four Nations Final on November 14 was:
B Slater, B Morris, G Inglis, J Hodges, J Hayne, D Lockyer (c), J Thurston, B Hannant, C Smith, P Civoniceva, L Lewis, P Gallen, N Hindmarsh. Bench: K Gidley, B White, A Watmough, S Thaiday.
From that lineup Justin Hodges is definitely unavailable with a long term injury, while Brett White and Johnathan Thurston hope to return from injury in time for selection but will be racing the clock to make the team.
Injury Update 19/04/2010: Greg Inglis damaged his ankle in the Storm's 18-16 loss to Manly in Round 6. He has stated he thinks he'll be right for the Test Match but he must be in some doubt.
Injury Update 26/04/2010: Ben Hannant & Josh Morris were injured in Canterbury's 36-18 win over Brisbane in Round 7. Both will miss at least a month and are therefore OUT of the ANZAC Test.
With that in mind who will get the call-up for the Kangaroos?

Here's The NRL Tweet's Australian Team for May 7 against the Kiwis.
Note: This team is a combination of players that will definitely be picked and those we'd like to see picked ahead of some incumbents who we believe don't deserve to be in the lineup for the ANZAC Test this year.

Billy Slater, Melbourne Storm
Slowly getting into the new season after another big September and Four Nations campaign, Slater will retain his #1 jersey because a. no other challenger is in irresistible form and b. he's Billy Slater.

Brett Morris, St.George-Illawarra Dragons
Has proven he is the best finisher in the game with a standout start to the 2010 season and as the incumbent it is hard to see him missing out. If he fires in the ANZAC Test he'll make his NSW debut for certain this year.

Israel Folau, Brisbane Broncos
Made an instant impact for the Broncos returning from injury against the Sharks and there can be no doubting his big play ability at rep level. At home on the wing or at centre - he'll be picked.

Greg Inglis, Melbourne Storm (Injured v Manly Round 6 - in doubt)
Like Slater he's had a slow start - in fact he's been barely sighted so far in 2010 but the Storm are 4-1 (entering Monday Night Football v Manly to close Round 6) and Inglis is capable of lifting when he needs to. You know he'll be there.

Josh Morris, Canterbury-Bankstown Bulldogs (Injured v Brisbane Round 7 - OUT)
The first left field pick of The NRL Tweet's Kangaroos team - Josh Morris could force his way into the team ahead of the likes of Jamie Lyon, Michael Jennings, Chris Lawrence and force Folau to the wing. A pure try-scorer and good defensively.

Darren Lockyer (c), Brisbane Broncos
He has started season 2010 like he finished the Four Nations last year. His troublesome knee which plagued his running game for the past couple of seasons appears to be no longer an issue and his involvement level has gone through the roof. Champions find ways to come back from being written off - remember Andrew Johns did the same thing only a few years ago. He'll be captain and five-eighth.

Cooper Cronk, Melbourne Storm
If Thurston fails to get back on the field before the team is picked or suffers a recurrence to his shoulder injury in his comeback - Cooper Cronk will be the Australian halfback. He's a complete halfback and knows how to run a side full of quality players - Australia will lose nothing with him in the #7.

Petero Civoniceva, Penrith Panthers
The best front rower in the game and if you doubt that check out any of his performances in the opening six weeks of Penrith's season. He's a rock carting the ball up, rarely makes an error and does his job defensively. What a player.

Ben Hannant, Canterbury-Bankstown Bulldogs (Injured v Brisbane Round 7 - OUT)
Has carried the Canterbury pack with David Stagg so far this season and although the Bulldogs haven't set the world on fire in 2010 - it's not from a lack of quality from Hannant. His form is as good as it was last year and he should be picked.

Cameron Smith, Melbourne Storm
The Melbourne skipper has been very good in 2010 - but the Storm haven't blown any team off the park so he hasn't had the press yet. He's going to be the Australian hooker.

Nate Myles, Sydney Roosters
Has found his best position at lock for the Sydney Roosters and will play a similar role here even if he's picked in the second row. Cleans up like no other player in the game and he offers quality in attack and defence.

Luke Lewis, Penrith Panthers
May get picked on the bench but he should start in the backrow for his skills to work in the structure of the team. Great defender on the edges and adds some ball skills on the edges as well as a willingness to run into a hole.

Nathan Hindmarsh, Parramatta Eels
Australian selectors see his value... but the NSW 'brains-trust' continue to ignore it. He's not going to play 80 minutes for Australia but he'd be a perfect 'middle of the game' defensive plug from the 20 minute mark onwards. Just competes.

Sam Thaiday, Brisbane Broncos
As an incumbent with a solid start to the season he'll hold his spot on the bench. Will probably play closer to the ruck if he wants game time. Defensively he's a weak link however but will still get picked.

Jarryd Hayne, Parramatta Eels
Explosive player who has failed to set the world on fire in the opening weeks of the season and it might cost him his wing spot. That being said he's going to be in the squad and coming off the bench in a roving role might be just what the doctor ordered to spark him back to brilliance.

Tim Sheens, Wests Tigers
Tactical genius that players love to play for. Knows how to coach the best in the game and he's the perfect choice for the Kangaroos.

So who misses out? (Please note with injuries to Inglis, Morris & Hannant any one of these players might come into the side - we named out Australian team April 19)
Paul Gallen would be the most notable omission - but his form this season has been very ordinary regardless of what his stats say. His team needs him to be a difference maker not a guy who hogs the ball to rack up the stats. Kurt Gidley would be Hayne's biggest threat for the bench spot but he's only going to be a couple of games back from injury and may not be picked. Glenn Stewart is a chance for lock forward but may not be dynamic enough to force his way into the team, while other experienced players like Michael Jennings, Jamie Lyon, Lote Tuqiri and Matt Cooper may be considered. Bolters could feature from the likes of Matthew Scott, Michael Weyman, Aiden Tolman (injured Round 7), Chris Lawrence and David Stagg.

Have we missed anyone with a strong claim?

So that's the team we'd pick for the 2010 ANZAC Test - what would your Kangaroos side be?

New Zealand won't be a pushover as the likes of Benji Marshall, Issac Luke and Lance Hohaia are in superb form but as always injuries may play a factor when it comes to the Kiwis selection process - as depth is always an issue.

We're all looking forward to watching this Australian Kangaroos lineup (or at least a variation of it) in the new digs at AAMI Park.