UPDATE: April 28 - NOT The Footy Show Special Fantasy NRL Blog Podcast - look out for it on the front page of wdnicolson.blogspot.com before Round 8!

First up let me apologise for never finishing the player scouting reports on the FoxSports Fantasy NRL subsection of the website - you got Props, Hookers and Backrowers covered before the season started for free but there's a project I'm working on now that should top all that... let's just say - can you say 'Who are the NRL's Top 200 Players?'
Stay tuned to wdnicolson.blogspot.com and the NOT The Footy Show YouTube Videos for more information on probably the most exciting Rugby League publication of the decade...

Be honest - just how bad is your Fantasy NRL team going in 2010?
Over the last few years I've dedicated myself to the Fox Sports Fantasy NRL competition because I found it to be the most interesting 'version' of the Fantasy Rugby League game in Australia. But when I learned that the kind folks at Fox Sports had scaled back their prize pool to some measly club game free tickets if you outscored 40,000 people every week... I've now turned my attention to the NRL.com's Dream Team (despite it's flaws) and am also actually doing quite well in the Fantasy NRL & AFL Games at sportsbet.com.au. The Daily Telegraph's SuperCoach competition probably has my number in 2010, as I didn't pay too much attention to the scoring system at the start of the year and have suffered from picking a similar squad to my Dream Team.
And my Fox Sports team is suffering mightily from a curse I have seemingly placed on the player I pick as skipper every week... the highest score any of my choices for captain in 2010 was Robbie Farah in Round 3 with 30... you can't compete (even for free NRL club game tickets) with such poor production from your skipper.

But enough about me - let's get to The NRL Tweet's Fantasy NRL Talk for Round 6.

Injury Update - Key notes for Round 6

Who is OUT worth dropping?

Johnathan Thurston is out 2-4 weeks with a busted shoulder... now if it was just a stinger he wouldn't have gone off during the Cowboys clash with the Tigers on Saturday Night and our 'professional diagnosis' is Thurston will come back way too early and have his shoulder collapse once again. He's a massive risk - especially if he can't run the ball because of the pain when he gets tackled and you should punt him RIGHT NOW. Also missing for the Cowboys in Round 6 will be Luke O'Donnell (suspension) and Aaron Payne (Injury)... ouch!

Tim Moltzen did his knee without any contact with an opposition player and is done for the year. Tragic for the youngster who really seemed to fit in at halfback for the Wests Tigers. Obviously if you have him there's no point holding on to him but have a quiet look at the price of his replacement rookie Blake Lazarus or stock up on Robert Lui while he's cheap (he's currently injured).

St.George-Illawarra won't have Michael Weyman (suspension), Jeremy Smith or Matt Prior (both injured for at least a month or two) for the trip to the Gold Coast, so avoid them but if they're out then look at guys like Dan Hunt, Ben Creagh and the unheralded Jon Green to step up.
Who is IN worth picking up?

Brisbane bring back a host of quality with Jharal Yow Yeh, Corey Parker & Israel Folau likely to play against the Sharks on Sunday. Parker is in the most doubt but Folau and Yow Yeh should play and playing the Sharks means you should seriously consider adding them for this week.

Newcastle get skipper Kurt Gidley back and significantly he's playing fullback where he's at his most involved. Still he had a serious hamstring injury so beware he might be average in his first few weeks.

Penrith got Trent Waterhouse back for Round 5 but he was a late inclusion so you didn't get a chance to pick him up. He's worth looking at now however as he's a good defender and has a great off-load.

A big inclusion for the Sydney Roosters this week with Jared Waerea-Hargreaves finally back from a pre-season shoulder injury. He is a monster of a man who will be used as a battering ram but we're eager to see his defensive stats before we get him in our Dream Team.
The next section looks at the players you should realise are the go-to picks if you have any hopes of moving up the leaderboard in any form of Fantasy NRL but it looks mainly at it from a Dream Team perspective. Beware when browsing the top point getters in any league though - because not every player will have the same role for the rest of 2010 as they have had for the opening 5 weeks of the season.

The NRL.com Dream Team
Top 5 Players in Each Position

The golden rule in NRL.com Dream Team is pick players who make Tackles. It is really that simple. Attacking stats aren't that valuable comparatively speaking and only kicking metres make a playmaker worth selecting. Metres Gained is the other 'big' stat but a player might run for 150m in a game yet that's only going to score you as many points as a player who makes 15 tackles... getting it?

Here's an updated on the top players in each position...

My NRL.com Dream Team Update - After Round 5.

Currently sitting in 374th... solid but still plenty of points behind the leaders. 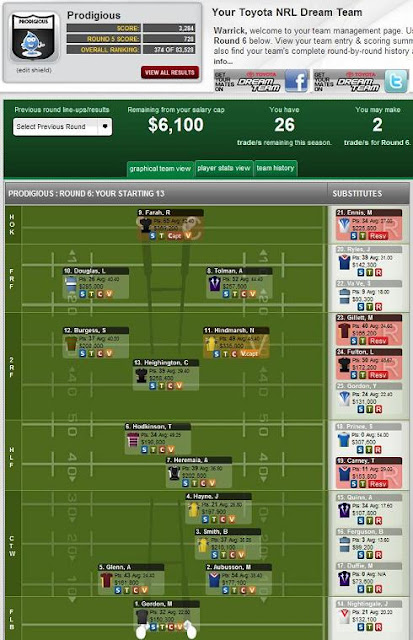 The Brisbane Broncos have signed former North Queensland prop Shane Tronc for the rest of 2010 - in all formats he's a Fantasy beast. His numbers in the UK Super League have been superb and he'll get plenty of game time from Brisbane coach Ivan Henjak who has issues up front this season. Get him before his price rises - because it will.
Your Feedback?
If you've got any questions, suggestions or comments - let us know here via the comments section or on The NRL Tweet (@NRLTweet). Happy to produce what you want to read when it comes to Fantasy NRL - so don't be shy.
By W D Nicolson