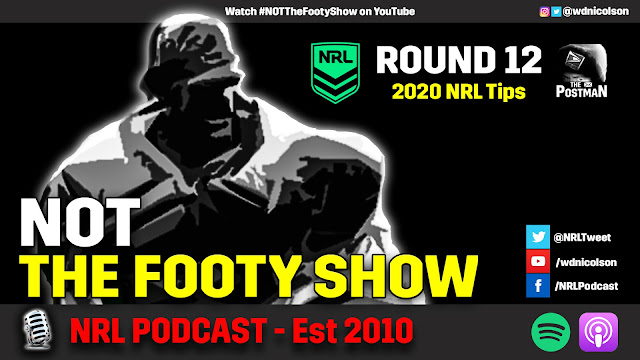 Back to 6/8 territory and with a little bit of faith in the fact the Dragons aren't very good it should have been 7/8. Sure Cronulla have been good and terrible this season and a video ref call helped their cause big time but if the Saints had any real gumption about them - they should still have won that match.

Canterbury upsetting Newcastle was hard to tip if you didn't look at the form line between the two teams the last few years... and the Dogs made it EIGHT wins from the last nine games v the Knights since 2014.

NOT The Footy Show did indeed return this week with Matthew Duncan joining Warrick Nicolson for Episode 220.

Round 12 Tips:
Thursday
Rabbitohs over Dragons
Souths haven't won since Round 9 but haven't been terrible in losses to Newcastle and Canberra. Saints were real good against Manly and then so-so v Canterbury before crashing back to earth when the ho-hum Sharks got the biscuits at Kogarah. Latrell Mitchell back for Souths is enough to lean towards the Rabbitohs.

Friday
Tigers over Warriors
Danger game if the Tigers aren't careful - the Warriors put it to Easts last week and have a new influx of players who will add something. But Wests really need to win this game and I expect them to comfortably - if they don't then Michael Maguire might drop everyone not named Harry Grant and Alex Twal.
Sharks over Broncos
Cringe-worthy matchup for Friday Night Footy... Brisbane are busted mentally and physically and the Sharks haven't played good footy against anyone good... fortunately for the Sharks the Broncos aren't good. Cronulla if Shaun Johnson continues to perform at the level he is showing of late.

Saturday
Roosters over Titans
Penrith didn't put the Gold Coast away last week and should have done it in the first half - the Roosters won't make that mistake and should win this by 30+.
Raiders over Cowboys
Canberra are on the road and do get three big inclusions with John Bateman, Curtis Scott and Corey Harawira-Naera coming into the squad but CNK is out and Rapana at fullback is questionable given he's not a passer of the ball (but then again CNK isn't really either). Danger game for the Raiders who should win this because the Cowboys are soft and just lost Josh McGuire for his continued recklessness he tries to disguise as 'hardness'. Raiders 10+.
Sea Eagles over Panthers
The upset of the Round as tipped on NOT The Footy Show. Manly are only missing Tommy Trbojevic from their best 17 if Dylan Walker gets up for this match and Penrith have coasted the last couple of weeks against poor opposition - really don't think the Panthers are playing the kind of footy that will trouble Manly's defence (that has switched on again after the Dragons debacle) and it's Manly for me at Brookie.

Sunday
Eels over Bulldogs
Parra should win and win well. The Dogs will have a go but Parra only have to shut down Foran and they'll win easily.

Storm over Knights
Melbourne by 20. The Knights resolve looked like it broke last week and the Storm are red hot.