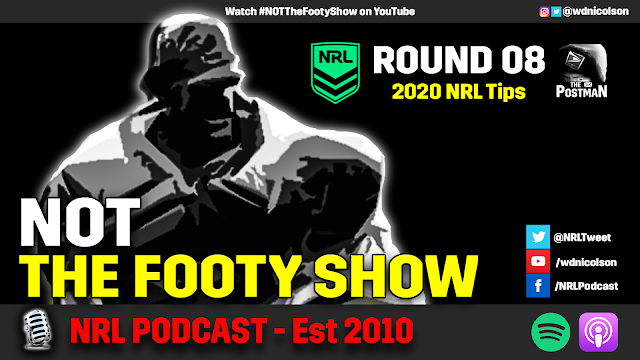 Cronulla winning was obviously a direct result of this line in the tips last week - ie. they liked themselves as the outsider...

'So go with Manly, but if you want an outsider this weekend take the Sharks' and didn't they dust Manly easily.

Whereas Brisbane just plain suck and the Cowboys stood up big time to knock off the very poor Knights.

Round 8 Tips:
Thursday
Roosters over Storm
Roosters lose Radley, Verrills and Liu to injury for this one, whereas the Storm lose Munster. Even if Munster was playing you'd still pick the Chooks with Tedesco returning. So pick Easts.

Friday
Raiders over Dragons
Surely Canberra have something for their home fans this week? The Saints actually played their best footy of the year losing to Easts - so don't discount them here. But surely Canberra turn up at home.
Eels over Cowboys
Parra thanks - even with no Mitchell Moses, the Cowboys need to win back to back to make people sit up and take notice. Parra.

Saturday
Sharks over Titans
The Titans have won two of three!! The Sharks however just dismantled Manly... and the Gold Coast only beat Brisbane... still you'd be feeling ok with yourself if you did take the Titans here... but Cronulla gets the tip here.
Broncos over Warriors
RTS being out decides it... but picking Brisbane after having them burn you last week is not easy... Broncos maybe?
Panthers over Tigers
Good clash but Penrith's form line is far superior over the last 3 weeks - Penrith lost to Parra (after leading most of the game) then beat Melbourne and Souths. The Tigers got beaten by the struggling Raiders, then beat North Queensland and Canterbury in blowouts - Penrith it is.

Sunday
Knights over Sea Eagles
Newcastle will bounce back from their shocker in Townsville but Manly will also rebound after getting towelled up by Cronulla. No Tommy Trbojevic and the presence of Pearce and Ponga is why it is Newcastle for the win here.

Rabbitohs over Bulldogs
Souths by plenty - they rarely miss opportunities to beat bad teams by a fair margin.