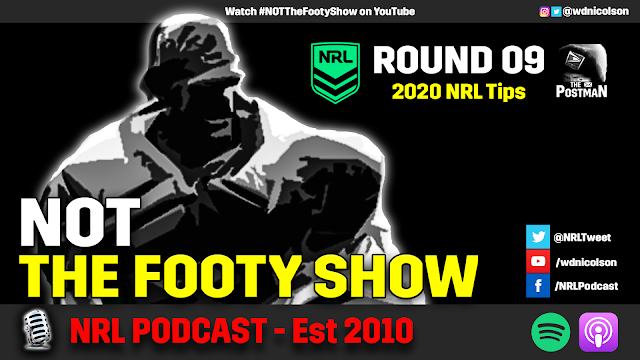 6/8 in Round 8 - missing on the Chooks (what a game that was - Melbourne played great but were still fortunate to win really) and the Broncos - who continue to disappoint everyone... well maybe not everyone but tipping wise they've dropped two gimmies in a row.

For the season the tipping rate is up to 65% - nothing to sneeze at kiddies.

Round 9 Tips:
Thursday
Roosters over Cowboys
The Cowboys might be in this from about the kickoff til the end of the first set of six... even with no Tupou or Cordner the Chooks will put up a score in Townsville.

Friday
Warriors over Titans
The Titans have cobbled together a three-quarter line for this one and the Warriors not only get RTS back but they also get him back after a stirring victory. Warriors have disappointed plenty of tipsters over the years but they are in excellent company with the Titans here so RTS actually playing decides this one. Warriors.
Rabbitohs over Tigers
Souths beat up the ordinary and bad teams - you've heard that before here, and the Tigers are just on the cusp of not being an ordinary team... in fact they win this week and they might get classified as a kind of good one. But that's where Souths are already - so pick the Bunnies on the back of Reynolds and Walker and their forwards taking on and beating a Twal-less pack.

Saturday
Panthers over Sharks
Cronulla have put two scores of significance back to back to quietly slip into the Top 8 and get a Penrith team that has been 'up' for a month for 3 wins and a loss. Beware the let down Penrith fans... but at the moment back your boys.
Bulldogs over Broncos
Sick and tired of thinking the Broncos are better than really bad footy teams... then they get the Bulldogs after blowing games against the Titans and Warriors. Just cannot pick Brisbane based on how they are going right now. Canterbury have played ok but are finding scoring points extremely difficult but they do get the Broncos this week. The Foran factor wins this for the Dogs.
Raiders over Storm
Melbourne found a way to beat Easts in a great game of footy last week, whilst Canberra should've put a score on the Saints but in the end only just held on. If Munster gets drawn into the lineup this tip changes, but right now Canberra will be sneaky confident getting the Storm in Canberra - as they've beaten Melbourne three times in a row. Go Canberra.

Sunday
Eels over Knights
Newcastle were great with 15 fit players last week but it'll take its toll again and Parramatta coasted to victory last Friday and get two extra days to rest up. The Knights are showing they are up for the fight this year but Parra - even without Moses - will keep hold of top spot with a win in Newcastle.

Dragons over Sea Eagles
Cannot believe the words that were typed above... come back Sunday to see if they haven't changed. Manly are losing players left and right and the Saints look healthy... this tip already hurts to pencil in let alone commit to.