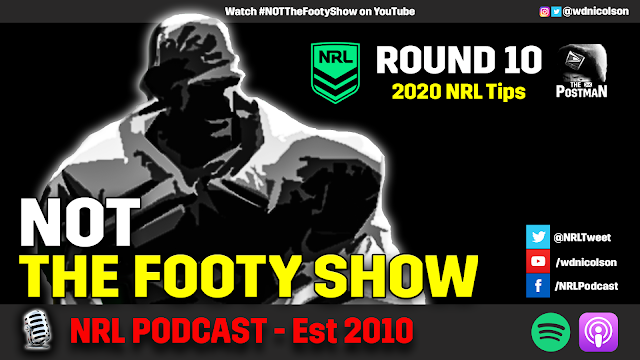 First up - why did any of you (and I) take the Raiders against the in-form Storm. That tip sucked and my apologies.

Mind you some decisions didn't help but tips don't care about what ifs or could've beens... they care about the final score.

So 5/8 in Round 9 - missed Canberra, Warriors and Bulldogs.

Canterbury was the baddest tip of them all... yikes.

But we did tip you St George-Illawarra over Manly and split Souths-Tigers correctly. That's not awful.

Unfortunately no NOT The Footy Show this week - Coxsmith and Waz will return after Round 10.

Round 10 Tips:
Thursday
Roosters over Raiders
Canberra will have a crack but with Josh Hodgson out for the year and their pack's depth in shambles - the Roosters will win and probably by the full time siren - have won well.

Friday
Storm over Titans
Cameron Munster is back and the Storm should put 20+ points between themselves and the Titans (who aren't going that bad) in this one. Melbourne thanks.
Tigers over Broncos
The Broncos are back on prime time and they come up against a beatable Tigers team that has dropped Luke Brooks to the bench... but Benji Marshall starts and their pack can hold Brisbane's forwards here and that'll be the difference. Tigers by 6.

Saturday
Dragons over Bulldogs
A month or so back Saints fell over again and got well beaten by Canterbury... and even though the Dragons crushed Manly last week - Canterbury are out from under the underwhelming attack only as a last resort Dean Pay approach and might give the Saints a scare here... but go with St George-Illawarra.
Rabbitohs over Knights
No Latrell Mitchell and the Knights do get some troops back... but lost Daniel Saifiti. Have swayed back and forth with the tip all week but Alex Johnston will go fine at fullback and the Saifiti loss is significant given how Newcastle use their starting front rowers. Souths... maybe. Check back Saturday to see if I've changed my mind again.
Eels over Sea Eagles
Still no Mitchell Moses for Parra but you will be game indeed taking Manly - even at Brookie. Manly have DCE in attack and a decent forward pack at the moment due to injuries and Parra haven't really missed a step without Moses. So take Parra but if you want an upset - don't rule out Manly as an option.
UPDATE FRIDAY ARVO - Matterson and Ferguson have withdrawn for Parra apparently... I think this now smells like a classic Dessie/Manly/Brookie ambush. Seriously considering taking the Sea Eagles now.

Sunday
Sharks over Warriors
The Warriors burned me last week so they can't be tipped... didn't pick Cronulla v Penrith so the Sharks get another chance to beat a badder team than them.