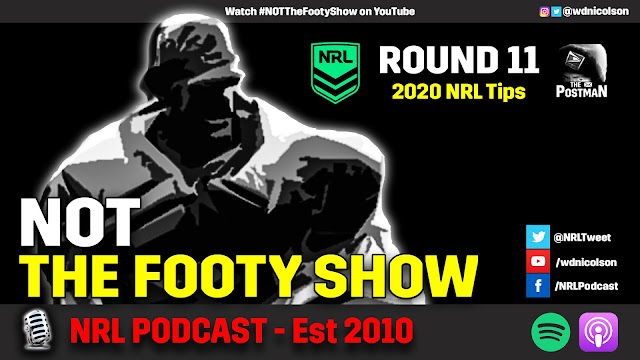 When news came through on Friday that Ryan Matterson and Blake Ferguson would miss for Parra v Manly - I wrote the below on the Round 10 tips... and then didn't change my tip.

Also showed too much faith in the Bunnies despite using the words 'Souths... maybe. Check back Saturday to see if I've changed my mind again.' so be smarter than me and follow the gut. I had Newcastle all week before I put the post up.

But despite missing Canberra's massive upset of Easts on Thursday - your local Postman still ended up with 5/8 in Round 10 and you really can't complain with 62.5% every other week surely?

Unfortunately NOT The Footy Show is off for a second straight week - for a few reasons but we will be back - hopefully you'll hear from Coxsmith and Waz ahead of Round 12.
Watch NOT The Footy Show on Youtube or listen to the Podcast via iTunes and Spotify.

Round 11 Tips:
Thursday
Eels over Tigers
Parramatta were bad last week and still almost won... the Tigers absolutely belted Brisbane but they are horrendous if you weren't aware. Parra get three key players back in Moses, Matterson and Ferguson and even though I think the Tigers will push them - you pick Parra here.

Friday
Sea Eagles over Cowboys
New coach feels might actually be a factor here for North Queensland - as they desperately needed a new message (if you've seen any of Paul Green's pressers this season you'll know what I'm talking about) but Manly just rolled the top of the table Eels... you know - the gut is thinking Cowboys but do you want to pick them and feel that way come Friday 8pm? Yeah me neither. Manly.
Storm over Broncos
Melbourne by as many as you wish to predict. Brisbane might stand up early but but early that may only be the first set after the kickoff. If Melbourne win by 40+ then I don't see Supercoach Seibold having a job next week.

Saturday
Roosters over Warriors
Sydney Roosters thanks. Next.
Dragons over Sharks
Can't believe I'm tipping the Dragons for a third straight week... but Cronulla have looked incredibly average against goodish teams and only beaten up bad sides (a theme for the middle third of the comp) and I don't mind what I've seen from the Saints of late. Dragons.
Raiders over Rabbitohs
Canberra should back up last week's superb effort to beat the defending premiers and account for a South Sydney team that is trying hard but lacking polish... they aren't going to challenge for the title in 2020 but Latrell Mitchell is missed on the end of their backline atm. Damien Cook is Canberra's biggest threat. Go Canberra but be wary of the Bunnies - Wayne Bennett will have continually reminded them of their last trip to Canberra and what a loss there meant... beware the Bunnies.

Sunday
Knights over Bulldogs
The health of Kieran Foran dictates how much of a chance Canterbury are in upsetting Newcastle. That doesn't mean they'll win but if Foz is healthy enough then they can push Newcastle for 60 mins but expect the Knights to run away with this one in the final 20.

Panthers over Titans
Penrith lost their hooker and fullback but are top of the table and they shouldn't lose here... still, got a feeling it won't be smooth sailing. Take Penrith.