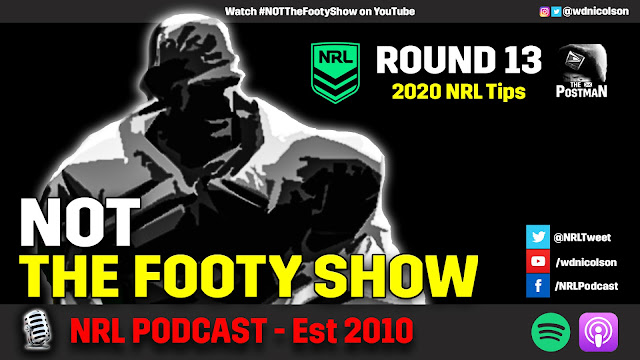 6 from 8 again but Manly were blown apart by the Panthers who looked like a far more aggressive team at Brookie than they had been for the last fortnight. So apologies if you went against picking the team in 1st place to take a Manly team devoid of answers when a good team turned it on.

Anyhoo... the other game was a genuine upset with the Warriors taking advantage of a Wests Tigers team that just has no backbone when the blowtorch is applied by an inferior side... seriously the Tigers just turn it up when a team they should beat fights back... it is almost as embarrassing as Michael Maguire kicking a chair to make a point... he's the one who keeps tinkering with a halves combo that wasn't going that badly at the start of the year with Benji and Brooks... and now he doesn't have Harry Grant for a week to play Storm-ball. Interesting times at Concord for Madge... or is he already thinking of sunny Townsville?

To Round 13 and the tipping percentage is looking healthy at 66.7% - you can't be complaining about that figure.

NOT The Footy Show is aiming to record Wednesday night for Episode 221 so watch this space for the show.

Round 13 Tips:
Thursday
Roosters over Dragons
The Chooks are leaking good players ti injury left and right (or just flat out dropping halfbacks) but they still go into this clash with the Dragons as heavy favourites for good reason. Expect Saints to put Hunt back to 9 but I don't think it makes a big enough difference - as long as Keary and Tedesco are playing then the Roosters should win this.

Friday
Sea Eagles over Warriors
Dessie Hasler will loathe the 'effort' put up v Penrith so Manly will come out with a fire in their bellies this week... but the Warriors just upset the Tigers so they will fancy their chances here. Stick with Manly as long as DCE runs out behind that pack but this is no iron clad guarantee two points.
Rabbitohs over Broncos
Adam Reynolds should play and that makes Souths red hot favourites here. Brisbane improved last week but as long as the Bunnies hold their own in the middle their backs are going to have a field day on the edges given what Brisbane have thrown up of late in defence. Souths thanks.

Saturday
Storm over Bulldogs
No Cam Smith or Ryan Papenhuyzen for Melbourne so there's an opportunity for the Dogs here if they try and play some enterprising football. Melbourne will keep it simple and play through the middle and let Cam Munster do all the attacking - so if the Dogs throw some caution to the wind they could get Melbourne here... really they could. I'll still pick Melbourne but beware the Dogs.
Knights over Tigers
Would like to pick the Tigers - as this is the kind of game they actually lift for - but they were bad last week and the Knights still have Ponga, Klemmer and Pearce fit and that's enough to lean their way given what the Tigers dished up against the Warriors. But you aren't insane to tip Wests but I'm going the Knights.
Panthers over Raiders
Respect the league leaders and take Penrith.... unless you think Canberra's form the last 3 weeks really is a sign of things to come in their life after Hodgson reality? The safer pick is Penrith... maybe.

Sunday
Titans over Cowboys
Michael Morgan is back but the Cowboys will need him to immediately be in top form to lift their style of play given what they have shown this season without him. The Titans are known to disappoint when you tip them so be careful... but do you really want to put what little faith you have going into this game in the Cowboys? Me neither - Titans.

Eels over Sharks
If Cronulla want to really start nailing down a Top 8 spot then getting these two points would be huge. Right now the Sharks are in 6th and realistically after this weekend only two teams outside the Top 8 will still be in the running so getting to 18 points with 6 games left would give them potentially an 8 point lead on the 10th placed team. Parra will rest Ryan Matterson again but should learn from last week's inability to put a team away (the fact the Dogs got within 2 points is embarrassing for a 'title challenging' team like that Eels) and should display more adventure in their footy against Cronulla - so I'm going with the Eels.