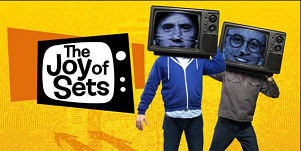 It has been almost four whole years since 'the best show on radio*' was axed by the forward thinking management at Triple M in Melbourne, and through no clever serendipitous planning at all, tonight the fourth episode of Tony Martin's post-Get This commercial endeavour 'The Joy of Sets' goes to air in need of a spike in the ratings to ensure it doesn't get a 'sexy new time' of 11pm Sundays on Channel Nine's third string digital channel GEM.

The Joy of Sets débuted on Tuesday September 20, sandwiched between Channel Nine's Two and a Half Men series opener and the Charlie Sheen Roast (attracting what were suggested in some circles as 'pretty impressive' ratings (quoting the actual figures makes zero sense, as who in their right mind actually understands how the system really works?) and has since followed with unspectacular numbers for episodes two and three - despite being sandwiched again around one of the only two shows on Channel Nine - Two and a Half Men (the other being the Big Bang Theory).

But don't you dare give up on the show just yet.

Because tonight's Joy of Sets delivers.

Well at least it did when www.wdnicolson.com attended the filming of the 'Family' themed episode in early September.

It was the third episode filmed (but is being shown as the fourth on the TV schedule) and hosts Tony Martin and Ed Kavalee were in fine form from the get-go - almost making it through the entire first segment without stuffing up their lines (Martin and Kavalee hold back 'the gold' before filming so their reactions are natural). But that's not why it was good.

Simply put - they are funny.

The comedic interaction between the pair has always been excellent (and as a trio with the late Richard Marsland - their chemistry was pure genius on Get This) and this episode was no exception, something the audience were banking on, as the vast majority made no effort to hide the fact they belonged to the 'Get This fanclub' during the interaction Ed and Tony offered to the audience throughout the taping of the show.

And that may well be the key to the Joy of Sets experience.

As a taping process - this was Get This in the flesh - even with the minutes clicking by through the shoot (which may have stretched well into the second hour), the audience were transfixed on the duo's repartee, despite both being forced to endure numerous 'pick-ups' to close out the show.
Guest host for the evening was Glenn Robbins - who needs no introduction and is by far the best guest the show has had so far - and the effortless way they all interacted is just one reason this episode will leave the previous three well behind in the race for 'best ep of the series*'. But again Robbins may have been funnier 'off-camera/pre-cutting' than he will be in the final show and that seems to be the biggest obstacle the program faces. There is a moment right at the end of the show when Robbins farewells the audience in a way that was born out of pure brilliance and tied into a previous moment in the show - but odds are it won't get off the cutting room floor.

Combine those moments with some astutely edited pieces from the wide world of television and The Joy of Sets is hilarious as a package of live-to-tape entertainment but when it gets cut down to 22 minutes... the first three episodes screened so far suggest that maybe, just maybe, it is not quite the same quality of show that you see in the flesh.

And this is where the show faces a tough sell with those uninitiated in the comedic stylings of Get This, The Late Show, Martin/Molloy etc. There is a subtle genius to this kind of comedy, yet the shows that seemingly dominate the ratings for Channel Nine are generally manufactured laugh track comedy, that in turn falls flat with the aforementioned 'initiated' audience.
So as crazy as it may sound, putting The Joy of Sets right in the middle of a 'Big Bang Theory/Two and a Half Men' quadruple shot may not be the best thing for the ratings... no wait, that's crazy, as if the show was on any other time the 'ratings' system would chew this kind of TV up and spit it out onto the tarmac of rejected pilots quicker than Warwick Capper's management asking for 'the cabbage' when you inquire about their star client's services.

The show IS funny, the only downside is if you didn't get to a taping during the first order of eight shows - it might not be quite as funny as your Get Thissian-friends might be telling you it is.

But reality has a funny way of making anything you were at; seem better than if you weren't actually at it.

Apart from tonight's show that is (providing the edit isn't unkind) - because believe us, we was there and watching Packed to the Rafters get cut to ribbons in a superbly clever and clean way is unmissable.

The Joy of Sets screens at 9pm Tuesday's on Channel Nine - who incidentally haven't exactly hit the right mark in marketing the show... but that's a topic for another day.


PS. The second last episode of the eight-part series (so that's logically Episode Seven) was also attended by www.wdnicolson.com and yes - it was funny stuff. One 'newbie' also noted the fact that the show was 'a lot funnier' in person than the first two episodes he had seen to that point.

What do you think?

* Quotes from www.wdnicolson.com review of The Joy of Sets October 11, 2011.
You can watch past episodes at http://channelnine.ninemsn.com.au/thejoyofsets/

And... just because we can, some Get This brilliance featuring Warwick Capper and produced by the late great Richard Marsland.