Todd Carney a Shark? While Cronulla don't have a choice... Todd's lucky he does.

Does Cronulla need Todd Carney more than he needs the Sharks?
By W D Nicolson, October 17, 2011

When news filtered through today (Monday October 17) that the Cronulla-Sutherland Sharks were poised to secure the services of the incredibly talented (yet equally inconsistent off the field) Todd Carney for at least the 2012 NRL season and possibly longer, one quote stood out from club management that left little doubt they were ready to roll the dice with Carney.


"We would handle Todd (Carney) exactly the same as the rest of our roster. We have a good, genuine roster," Cronulla's Chairman Daniel Irvine told the Daily Telegraph.

Ostensibly that was the clearest sign yet that the Sharks don't just want Todd Carney for 2012, they REALLY want him and are prepared to back the 'genuineness' of their current roster to handle the apparent baggage that Carney has carried throughout his rugby league career to date.

Update: Tuesday October 25 - Daily Telegraph reports that a 2 year deal for Carney at the Sharks is done.

Carney had his services thrust on to the open market by his most recent former club, the Sydney Roosters, as the 2011 NRL season wound down and it appeared that the odds of Carney getting a gig in the NRL once again, were slim.

After all, the 25 year old had found his way out of his junior club the Canberra Raiders, with an inordinate number of off-field indiscretions by the end of 2008, only for the Roosters to pounce on his signature at the first available opportunity.

The Roosters endured a year long NRL imposed ban on Carney in 2009 but were rewarded when he then led the Roosters to a Grand Final appearance in 2010, when he said he was off the drink with a Dally M and Player of the Year Award winning season.

But then a relapse in the off-season was followed by a few more during 2011 and the straw that broke the Roosters' back was a late season drinking session shortly after the team agreed to a booze ban in an attempt to end their woeful year on a high note. 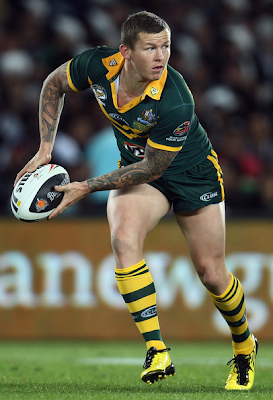 While no one has ever doubted his ability (after all he has played for Australia and had he not relapsed, was the firm favourite for a NSW Blues jersey in 2011) - it is that ability alone that has ensured he has received more chances than the average individual.

Further evidence that the Todd Carney story is just another dose of the reality of professional sport - the more valuable the player to the club/team/franchise, the more chances they get to stay with the club/team/franchise. In his autobiography, footballing great Andrew Johns admitted that he himself had received that very same treatment in Newcastle, all because of the ability he had on the field.

And now the Cronulla-Sutherland Sharks, who have played in just one Finals Series since 2006 (they finished 3rd and reached the Preliminary Finals in 2008), are so desperate to make another appearance in the games that matter in September, they are doing what the Raiders and then the Roosters believed was the right thing by their club - adding talent despite the risks.

The thing is, Cronulla have no choice in the matter.

As it stands the Sharks are a developing team under second (and a half) year head coach Shane Flanagan, that still looks a quality player or two short of pushing for a playoff spot next season. Despite their current roster featuring a number of talented halves (Wade Graham, Chad Townsend, Jeff Robson and Albert Kelly are currently contracted), none have the truly game-breaking skill of a Todd Carney and there are suggestions (good and bad) that Cronulla's long term future may well be linked to the on-field success of the team. So the pressure is certainly on the team to win.

The facts are: Todd Carney makes the Cronulla-Sutherland Sharks a playoff calibre team. Bet it at halfback, five-eighth or fullback - Todd Carney offers the Sharks the points the team and the fans crave.

But the other fact in play is that Todd Carney may not need the Sharks as much as they need him.

The reason once again is the 'talent factor'. Carney has boatloads of it on the field, but a chequered past off it makes most clubs wary of latching their club's fortunes to him.

But if the NRL decides not to sanction Carney again (it is not unreasonable to suggest his off-field indiscretions in 2011 fail to match those he had with the Raiders -  which led to his first NRL imposed sanction in 2009), then Carney once again gets to choose (within reason) where he plays in 2012.

And although the Gold Coast Titans had offered a drastically undervalued contract earlier this month to Carney, and the Daily Telegraph also linked him with South Sydney and North Queensland, the boy from Goulburn might actually have even more options than everyone thinks he does. Particularly if he can bottle the success of 2010, by bottling his love of the bottle.

Purely because he is extremely talented on the rugby league field.

Like it or not, that is the reality of Rugby League in Australia. The better you are, the more risks your club takes on you. Anyone who thinks this isn't the case is deluded.

Now it seems the Cronulla-Sutherland Sharks are the latest club keen to see if they can harness this kind of talent and ride Todd Carney's brilliance to a season that delivers success... regardless of the risks.

And good luck to the Sharks and Todd Carney.

IF he chooses to play for them...