No Faith in Braith? Daniel Mortimer's arrival may force Braith Anasta to end his Roosters career at lock.

A few years ago Daniel Mortimer was riding the crest of the rookie wave, as he helped steer the Parramatta Eels to a fairytale appearance in the 2009 Grand Final.

Fast forward to October 2011 and two unfulfilling seasons later (one of which, was spent for the most part, in the NSW Cup), it appears Daniel Mortimer will not carve out the long and storied career many Parramatta fans believed he was destined to achieve and instead heads to the Sydney Roosters for the next two years.

Mortimer at just 22, has accumulated 48 First Grade Games, played in a Grand Final and was rated as a can't miss prospect by the great Andrew Johns when he was still in the junior ranks, but he fell out of favour with new Parramatta coach Stephen Kearney early and despite being on a healthy contract was punted to the NSW Cup after Round 10 loss to the Cowboys. 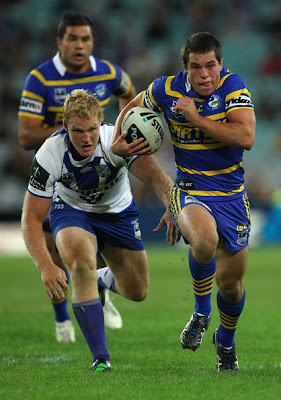 Mortimer had been courted heavily by the Canterbury club (where his family name was made famous) prior to re-signing with the Eels at the start of 2010 (through the 2013 season), but it was that very contract hampered his attempts to get a deal elsewhere once Kearney deemed him of no use to the top squad. He failed to find a taker before the June 30th deadline (to switch clubs mid-season) and finished the year with the Wentworthville Magpies.

But his NSW Cup purgatory was short-lived, with a move late last week by one Sydney club opening up salary cap room for the seemingly unwanted five-eighth on their roster.

That club was the Sydney Roosters, and that move was the release of veteran prop Jason Ryles (who should have a new club soon, as he still has plenty to offer in the NRL) by 'mutual agreement'.

The move appeared curious given Ryles was the only experienced front rower on the Roosters' roster, but when CEO Steve Noyce offered this reasoning for the transaction, it appeared to be purely a salary clearing move.

"Jason and the club have reached an agreement that he won't be with us next season. A decision has been made, and it has been made by mutual agreement. For whatever reason, he's been given permission to talk to other clubs. I'm sure he will find a suitable club to go to."

Now the 'whatever' reason is much clear, releasing Ryles made room for Daniel Mortimer's contract.


While it is unclear how much of the original deal the Eels will still pay, Mortimer has agreed to a new deal with the Roosters that also goes through 2013.

So we've established that Parramatta didn't want Daniel Mortimer, but the question now becomes - why do the Sydney Roosters feel so differently?


Well a week after talking up the reasons why the Sharks should sign Todd Carney - the Mortimer/Ryles transaction links back to the talented Carney and his impact on the style the Roosters like to play under Coach Brian Smith.

Everyone knows the story surrounding Carney's time at the Roosters - but the fact he is no longer on the roster means that Smith needed to find a new five-eighth to play outside his NSW halfback in Mitchell Pearce.

But wait - you say - isn't skipper Braith Anasta the logical choice to take back his #6 jersey full time now that Carney is Cronulla-bound?

Well that is what Sydney recruitment manager Peter O'Sullivan would have you believe, when he told the SMH that Mortimer would be used in a utility role to enhance the incumbent halves combination of Anasta and Pearce.

But hold the phone Blocker! Anasta was the incumbent #6 before Todd Carney signed with the Roosters for the 2010 season and evidently only held his spot at five-eighth for the first half of the season while Carney re-adjusted to the NRL and more significantly, Anthony Minichiello himself was eased back into top grade action on the wing.

Once Minichiello was back to form, he went to fullback and Carney shifted to five-eighth, which resulted in Smith moving Anasta to the backrow for the second half of the season... and the Roosters would go on a 9-4 tear from that point on (Round 18 onwards) and finish up contesting the 2010 Grand Final.

Smith's preference for a three-pronged playmaking scrum-base proved a master-stroke and although Anasta would start 2011 at five-eighth - the moment Carney was 'fit', Anasta would somewhat reluctantly move back into the pack.

With Carney no longer on the books, Smith seems to have made a calculated gamble that Mortimer (a player who has not reached Carney's class... yet) is the best option available to him to regenerate that trio of playmakers that made the Roosters so potent in the back end of 2010.

Mind you, Mortimer's form was woeful for most of the past two seasons at Parramatta, so he has to prove he has the goods during the pre-season but Smith has witnessed first hand that Anasta's best football has been played on the edges rather than being forced into an organising role.

As a result of Anasta's edge suitability, it would be stunning not to see Daniel Mortimer get first crack at the #6 jumper in the trials alongside Mitchell Pearce. While that may seem harsh on Anasta, what is working against his stay at five-eighth is the fact there is room in the backrow, especially with the departure of Nate Myles to the Gold Coast.

While Mitchell Aubusson is expected back from a shoulder reconstruction and should start, only Aiden Guerra, Brad Takairangi, Tom Symonds and Boyd Cordner loom as Anasta's main competition to join Aubusson in the backrow. And with Ryles also departing, Frank-Paul Nu'uausala (who was used in the backrow in 2011) will move into the front row and join Jared Waerea-Hargreaves, Lama Tasi, Mose Masoe and Martin Kennedy in the rotation.

Add all of this up and it points to the eventuality that Braith Anasta is going back to lock*.

Whether he likes it or not.