Here are The NRL Tweet's Reviews, Game Notes & Results of Round 16 of the 2010 NRL Premiership.
(Subscribe to the NOT The Footy Show Podcasts via iTunes HERE)
|=| With State of Origin Game 3 on the horizon - Round 16 was a full round of games, coinciding with the Women In League Round - celebrating the contributions Women have in making the big game even bigger.
Here are the Round 16 Results with the NRL Tweet's Exclusive Game Notes and new to Round 16 - NRL Game Highlights from the YouTube Channel 2010NRL
|=| |=| |=|

|=| The NOT THE FOOTY SHOW Podcasts |=|
This week's Episode 26! Round 16 Pocast Preview:
Video Preview - Including 'Return to Leichhardt' Trailer

ROUND SIXTEEN OF THE NRL PREMIERSHIP SEASON 2010
For an easy to print .pdf of all the lineups named Tuesday click here.
BYES - NO TEAM
|=| FRIDAY
DRAGONS

|=| The NRL Tweet's Game Notes From WIN Jubilee:
|=| I can live with tipping the Tigers tonight - they were down 14-10 with 20 to go & Benji Marshall was a complete non-factor. But of course - all credit to the Dragons. Composed throughout & although the last two tries flattered them, they were the better team.
|=| Thought both Jamie Soward & Luke Lewis were jibbed out of Man of the Match Awards. Prior was good, Jennings great but neither MOTM.
|=| I don't think the Wests Tigers lost any respect with their effort tonight but the Dragons just firmed even more in Premiership betting.
|=| Biggest story tonight might surprise you but Benji Marshall was ordinary. Scratch that - terrible. He has to deal with playing half. I'm a massive Benji Marshall fan. But I'll say it - he looked like playing halfback was a chore, not an opportunity to change the game.
|=| With Mark Gasnier signing with St.George-Illawarra - he's either going to be seen as the saviour that gets them to a premiership or the villain who came in and disrupted a team that looked on track for a title.
|=| Follow The NRL Tweet for more |=|

|=| The NRL Tweet's Game Notes From CUA:
|=| According to the Channel 9 Commentary - there wasn't a single handling error in the Penrith-Manly game until AFTER halftime.
|=| Thought both Jamie Soward & Luke Lewis were jibbed out of Man of the Match Awards. Prior was good, Jennings great but neither MOTM. That's as good a game I've seen Luke Lewis play - EVER.
|=| If Penrith's big men dominate the ruck like they did tonight come Finals - the Panthers are in this premiership up to their eyeballs.
|=| Manly's title charge ended with Brett Stewart's injury; now they may have lost Glenn Stewart long term on top of losing Jamie Lyon.
|=| Michael Jennings has scored hat-tricks lining up at both left and right centre in 2010... thing is he scored at least one of those tries up the middle of the field. Personally I think he's better on the right. But that roving role is something more coaches MUST encourage their players to do. Josh Morris at Canterbury case in point... mainly because the ball never gets to him at the Bulldogs anymore!
|=| Follow The NRL Tweet for more |=|

|=| The NRL Tweet's Game Notes From Parramatta:
|=| Missed this game with other commitments so have only seen the highlights.
|=| Follow The NRL Tweet for more |=|

|=| The NRL Tweet's Game Notes From Dairy Farmers:
|=| Missed this game with other commitments so have only seen the highlights.
|=| Follow The NRL Tweet for more |=|

|=| The NRL Tweet's Game Notes From ME Bank:
|=| Missed the first 55 minutes of this game with other commitments... so all comments below based on final 25 minutes & highlights.
|=| After the game Cameron Smith & Craig Bellamy suggested the Storm players have lost their 'killer instinct' in the aftermath of their Salary Cap Cheating. Thing is lads - your club gave you an illegal chance to have that killer instinct... please stop it with all the 'feel sorry for me' pleading.
|=| Badly needed win for South Sydney who emerge from a 3 game stretch that saw them suffer an horrific loss to Brisbane, blew a lead late against Manly and toughened up considerably against the Storm to win in Perth.
|=| Justin O'Neill scores two tries and sets up a third but realistically all he should be remembered for is dropping a sitter of a cross kick uncontested over the line from Cooper Cronk that would've sealed the deal for Melbourne with 20 minutes left.
|=| It may have been a bitterly cold night in Perth but only 13,164 for the only game Perth will see this season is bitterly disappointing.


|=| The NRL Tweet's Game Notes From AMI:
|=| If Roosters miss the Finals there is no doubt whatsoever that Brian Smith will look back at minutes 74-80 of today's game as to why.
|=| The Warriors have got some momentum going lately. Have 4 wins from 6 games since Round 10 - losing only to the Dragons & Tigers.
|=| Taking nothing away from Kevin Locke's performance today (Hat-trick + Game Winning Try) but that '1st try' was an horrific decision. Still trying to see a slow mo shot of the ball actually being grounded before the dead ball line...
|=| That being said - Locke's game winner said all you needed to know about which team wanted this game more. Roosters had it on toast with 6 minutes left but the Warriors never gave up and the lack of urgency by the Roosters forwards to fall on that loose Lance Hohaia kick at the end would've been shattering for Brian Smith.
|=| Perhaps the greatest aspect of this clash wasn't Locke's last minute heroics (when he nearly chopped himself in half around the goal-post) but the crowd - which was in excess of 20,000 in Christchurch!
|=| Follow The NRL Tweet for more |=|

|=| @NRLTweet Recap: Newcastle may not have deserved to beat Parramatta last week but they totally outplay the Titans at Skilled - win 24-16.

|=| The NRL Tweet's Game Notes From Skilled:
|=| There's a massive push for Greg Bird to play Origin but his defence is so unreliable. He's good & terrible in the space of 5 minutes. And he keeps missing tackles that lead directly to tries.
|=| That's the best game Jarrod Mullen's played in a while. Bout time the kid got going - great to see him ball play at the line again.
|=| Kid that impressed me in the Knights-Titans game was Kayne Lawton. Not sure where the Titans play him - but he really had a crack.
|=| Newcastle coach Rick Stone post-match. "If Kurt Gidley is not NSW Captain and fullback then I'm the worst judge in the world." Rick now I know Gidley has a crack each and every game but he's not the best option for the Blues as fullback or skipper. I can't help but wonder if he's got one eye on his stats each week the way he'll run the ball even when he's got a backline set outside him... there's a difference between hard work and making your game look good on the stat sheet. And I'm not saying I don't think Gidley is a good player - he most certainly is. But he wasn't the difference yesterday - Jarrod Mullen's return to form and a lack of Scott Prince was.

|=| Canberra Raiders 10: J Monaghan, J Thompson Tries; J Croker 1/2 Goals.
|=| Canterbury-Bankstown Bulldogs 18: J Morris, B Barba, L Patten Tries; B Goodwin 3/3 Goals.
|=| @NRLTweet Recap: No team can butcher so much possession & field position like the Raiders. Bulldogs score 18 points in opening 18 minutes & win 18-10.
|=| The NRL Tweet's Game Notes From Canberra:
|=| Disgusted with the Canberra performance tonight. Fan or not - the article tmw will be required reading as I pick the 'structure' apart.
|=| Loved what Canterbury brought to the table in opening 20 mins but Kevin Moore why the heck did you reign the game plan in thereafter?
|=| Biggest thing you notice with Terry Campese is he accepts his role is to run the show... not be a difference maker. Unacceptable.
|=|  Follow The NRL Tweet for more |=|

1 > Nic & Waz headed to Leichhardt Oval on Sunday Afternoon for the Raiders v Tigers… we reveal the coming release of the NOT The Footy Show's 'Return to Leichhardt' Motion Picture.
2 > We start the ‘THAXXXX Bellamy!’ Campaign…
3 > An NRL Tweet Poll reveals the 2010 NRL Premiership Favourites as voted by Twitter!
4 > All the Round 15 Moments covering all the results including why Trent Hodkinson is cooler than the other side of the pillow…
5 > Three Big Talking Points -
a > Mark Gasnier – has he or hasn’t he signed with the St.George-Illawarra Dragons? Plus who gets pushed out when Gasnier comes into the lineup?
b > The Powers of the Video Ref – what should they be able to rule on vs. what they rule on now.
c > Is the NRL catching up to the Twitter Revolution… are the NRL Clubs finally getting the idea that Twitter can make a massive difference to their connection to fans?
6 > NRL Tweet Player of the Year Leaderboard after 15 Rounds – Brett Finch breaks into the Top 3!!!
7 > Twitter Time - The NRL Tweet has a great follower base and not only do we discuss the findings of our Premiers’ Poll – but we podcast break the story of Parramatta CEO Paul Osborne getting busted for allegedly stealing from Woolworths!
8 > Plus all our Tips + Previews of NRL Round 16 + Tipping Records + Special Fried Rice Picks this week.
9 > Fantasy NRL Talk… not much stand alone wise but our Preview has some bits and pieces.
10 > Plus we give NRL Tactics a plug – 6:30pm Thursday Nights on Fox Sports!
Cheers Waz & Nic
NOT The Footy Show
|=| |=| |=|

STATE OF ORIGIN GAME 2 REVIEW HERE
|=| Click Here For Our 2010 STATE OF ORIGIN SERIES PAGE - All the Results plus Player Profiles, Previews, Reviews, Videos, Podcasts + our State of Origin Memories.
|=| |=| |=|
|=| 'NOT The Footy Show' Fox Sports Fantasy NRL League - CODE: 1756-4389 - 30+ Teams have entered and the winner takes away a hastily cobbled together trophy! Enter mid-season if you wish - we welcome the extra competition.
|=| |=| |=|
|=| Here are the NOT THE FOOTY SHOW Videos for Round 16
|=| NOT The Footy Show Episode 26 - NRL Round 16  Video Preview (Coming June 24)
You can subscribe to the audio only podcast on iTunes by entering this link into your 'Subcribe to Podcast' option or via the iTunes Podcast directory. 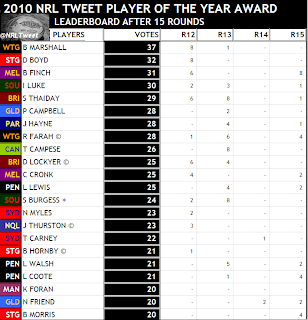