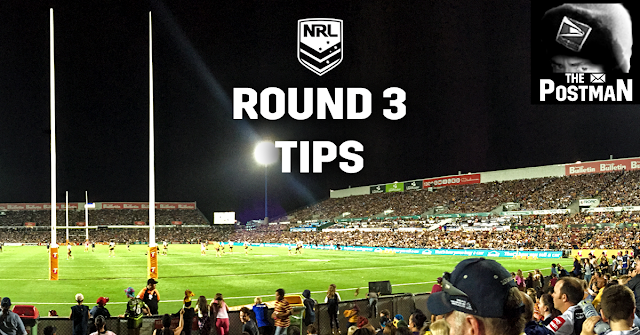 Well back to back respectable 5 from 8s to start 2017... so we're in the game but we need a little improvement from Round 3. Super Saturday killed us in Round 3 with the Titans, Manly and Canberra getting dusted by Newcastle, Souths and Cronulla respectively. That said - we had a good start with Roosters, Storm and Cowboys and came home strong with two easy wins - Penrith and Parramatta.

🚨 Podcast Alert: New NOT The Footy Show Podcast is recording Monday with NRL Photographer Robb Cox - if you've got something you want us to discuss email us

Tips for Round 3 2017
Storm over Broncos
Slater is back and I'm switching from the Broncos to the Storm... yup, I had Brisbane all week. But Slater back, Storm at home... Brisbane coming off a tough golden pointer (even though it was last Friday)... Storm win if they hold Brisbane in the middle.

Bulldogs over Warriors
Des Hasler's thrown the two kids into the mix and he had to. Injuries to Hopoate and Holland could help the Dogs in the short and long term because Abbey and Montoya add some much needed freshness to the Dogs. Warriors lost RTS today and still don't have Foran... upside is game is in Dunedin.

Titans over Eels
Dale Copley is a new face likely after joining from the Roosters today... the Titans will be without Hayne but the Eels lost Norman... Titans find a way at home with Norman not pulling the strings for the visitors. He's absolutely crucial to how attacking Parra can play.

Rabbitohs over Knights
Both impressive last start winners - but even at home I'm not confident the Knights are back in the tip them wisely category yet. Souths I guess.

Panthers over Roosters
Game of the Round... leaning Penny Panthers at home. Just.

Cowboys over Sea Eagles
As long as JT is playing you pick North Queensland here. Ponga v Trbojevic is going to be a battle we'll enjoy watching for a long long time...

Raiders over Tigers
Canberra are getting troops back and just cannot afford to start the year 0-3 (including two games at home) if they want to be a Top 4 team...

Sharks over Dragons
Better team wins here. It's that simple - local derby or not.