NRL Round 1 Tips from The Postman 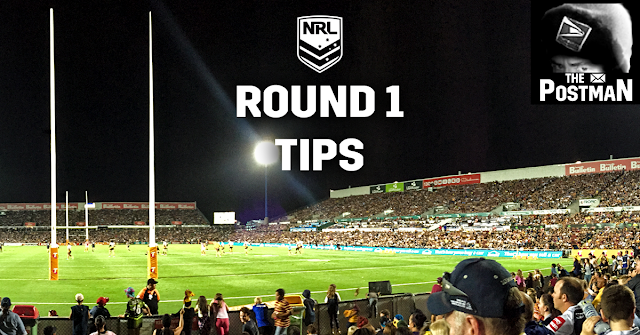 Welcome to another year of tips on www.wdnicolson.com and after last year's career best 70.8% tipping success rate (see stats below) - why would you go anywhere else for your NRL tips?

To be any chance in any tipping comp you HAVE to start well.

Look for these tips every Wednesday after Round 1.

Tips for Round 1 2017
Broncos over Sharks
Premiership hangover, no Holmes, no Ennis and a rookie hooker (heck no Barba either)... Broncos primed for an ambush at Shark Park. Already regretting this... changed the tip 8 times this week.

Bulldogs over Storm
Slater missing didn't worry me... Tohu Harris missing does. Even if Bellamy scraps the Munster at 6 experiment it may not make much impact as I expect the Dogs might give Melbourne's pack a bit of a working over at Belmore - Harris is that important and remember Proctor's gone too. Leaning home team.

Tigers over Souths
No Adam Reynolds and I'm leaning Tigers. Farah will conduct things for the Bunnies but I worry about their defence (let alone their attack sans Reynolds) and we know the Tigers can score points. Mind you they can't defend either but... yeah Tigers.

Panthers over Dragons
The one no brainer of the weekend... Penrith look tremendous entering the season and they don't even have either first choice winger. Dragons might be lucky to get to double figures with The Solution (Josh McCrone) at halfback...

Cowboys over Raiders
Sticking with the home team... Canberra at full strength might have been a different story. Canberra to stick at it but the class of JT and Morgan gets the Cowboys across the line in Townsville in a cracking opener.

Roosters over Titans
Had Titans pretty much all week... then you look at the Roosters 1-13 and you are nothing but impressed. Hayne and the young halves can make me regret my decision but both Titans centres are underdone and the Roosters counter with Ferguson and Mitchell... road Roosters for mine.

Warriors over Knights
If we all didn't know any better - the Warriors would be the moral of Round 1. But these are the Warriors... look you have to pick them but Newcastle might just find a way.

Manly over Eels
Manly at Brookie... that's the main reason I've gone with them here. That and Tom Trbojevic is an out and out gun. Manly's pack holds up against Parra's and they hold on. Nothing in this - in fact sideline conversion wins or loses it...