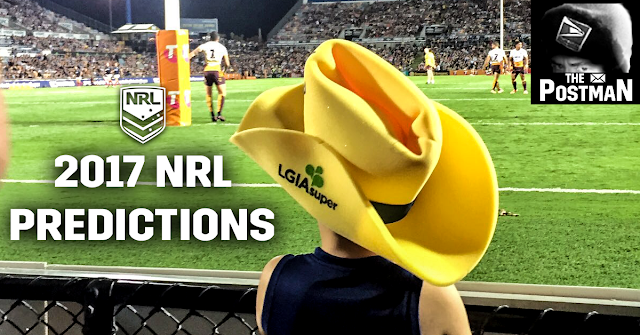 The Postman has cast his eye over his SuperCoach team a millions times more than every NRL team heading into 2017 but that won't stop him from listing his end of season predicted ladder and who he thinks plays off in the Grand Final.

To the dart throws!

Predicted NRL Ladder 2017
Hurts to leave the Dogs out of the Top 8 (I mean when do they miss out???) but of the rest of the teams that I left out - none of them install a lot of confidence that they will force their way in... so that leaves just one spot for the Rooster revival and the Bulldogs (or the Titans) are the team to make way.

The Top 4 look the strongest as we head into the season and yes that means I'm pushing the Sharks all the way down to 7th. Harsh on the worthy 2016 Premiers but gotta go with the gut here.

Titans get in over Bulldogs based on Jarryd Hayne.

Truth be told I think any of the Top 4 could end up in the GF - these are your best 4 teams so I think they battle for the big one... Cowboys have one last fling with JT and Scott at their best, Raiders get ruthless and they might make a heck of lot of fans happy after a 23 year wait...

Enjoy the season - unless you are a Cowboys fan I hope for your sake I'm wrong!