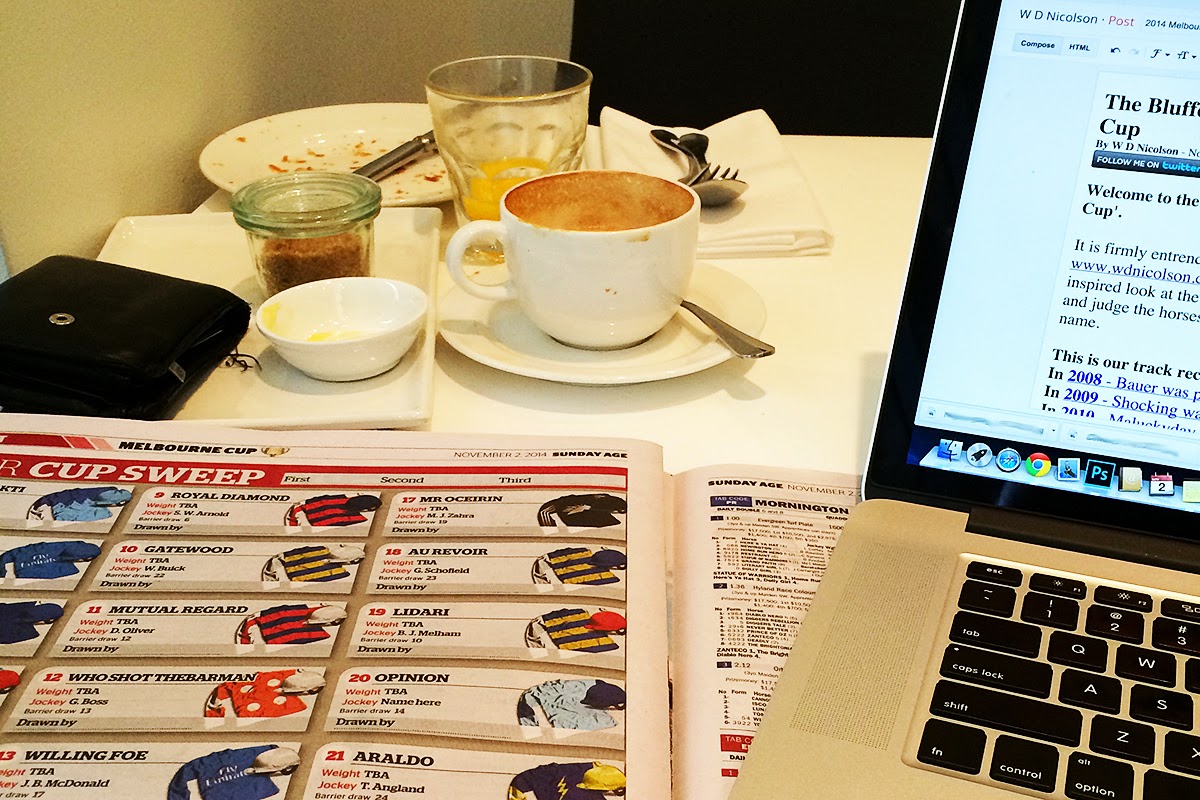 Welcome to the 7th Annual 'Bluffer's Guide to the Melbourne Cup'.

This is a special edition of the Bluffer's Guide - written on location in Melbourne the weekend before the big race - and although this is the only Horse Racing piece you see on www.wdnicolson.com each year - we guarantee it is the best one!

The brief is simple - we take a less than inspired look at the huge field for the 3,200m race at Flemington and judge the horses in the race based purely on the quality of their name.

And last year in 2013... we kept up the very average predictions. Fiorente won after we picked it to finish 5th... Royal Empire was our pick and it plodded home in 14th... Sea Moon and Mount Athos finished 13th and 3rd (so we got Mount Athos 100% right)... while Dandino finished 5th after we had it 4th and our 6th placed finish - the aptly translated Voleuse De Coeurs (Run from the Toilet) was 10th.

So it was actually quite a decent year of Bluffing all things considered...

But you aren't here for any punting tips, you're here to see if for the 7th straight year I can come up with some moderately interesting lines pertaining to the competing horses in the 2014 Melbourne Cup field right?

As we stress here on www.wdnicolson.com, think long and hard about what you could spend (or save) the excessive money you punt with on Melbourne Cup day... in short, don't be an idiot.

Anyhoo, to the Bluffer's Guide - each horse has its current Sportingbet prices (as of 2/11/14) listed next to the horse's name and below that is our 'Scouting Report'.

Now all horses are listed 1 through 24 with the field confirmed on Saturday - and given there's a lot of re-runners from recent years, we haven't tinkered with some punfection...

The Name is ALL that matters - 2014 Melbourne Cup Bluffer's Guide

ADMIRE RAKTI #1 @ $5.00
Sorry even if you are the current favourite, I do not admire your name enough to pick you to win this thing.

FAWKNER #3 @ $10.00
6th last year and I think there's a park called 'Fawkner' like 1km from where I'm staying in Melbourne... but sorry, not gonna happen even with the proximity factor at play.

RED CADEAUX #4 @ $19.00
I'm out of clever things to write about this horse... this is year #4 if I'm not mistaken but it regularly contends so put it on your possibles list.

PROTECTIONIST #5 @ $6.50
There was once a Transformer called Protectocon... okay maybe there wasn't but given how bad the last Transformers movie was - that borderline joke is already a better use of the Transformers IP than that movie was.

SEA MOON #6 @ $151.00
See that moon way out there in the night sky? Well that's about as close as this horse is going to get to winning in this year's race.

JUNOOB #8 @ $31.00
So what drugs were this horse's owner on when picking this name? Or were they going for a half decent Scrabble triple word score?

MUTUAL REGARD #11 @ $13.00
I don't mind this horse, and neither do the owners, the jockey, the trainer, the person who committed the crime on the next horse...

WHO SHOT THEBARMAN #12 @ $21.00
I can only assume horse names are not allowed to have a ? on the end of them... otherwise this horse would be my pick based on moderate name creativity alone.

MY AMBIVALENT #14 @ $51
Looks up ambivalent... not sure which meaning to believe.

Ok let's be honest - this year's horses gave me very little to work with name wise... but now to the tips, hopefully they improve on an awful sketch routine above.

2014 CUP PREDICTIONS as of November 2...
(I reserve the right to change once the final field is set, will lock in my selections by Tuesday 3pm) 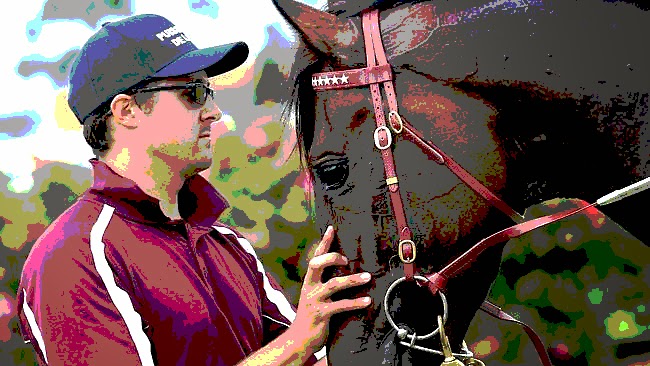 Let's be honest - we've got no idea about any real chances here and we're actually more interested in better names to work with next year than who wins in 2014!