The 2009 Toyota Cup - the National Youth Competition which runs parallel to the NRL - is nearing its own Finals Series and today announced its Team of the Year.

Last year Canberra won the inaugural Toyota Cup and featured three representatives in the Team of the Year in 2008 - sharing the highest number of representatives with the Bulldogs. 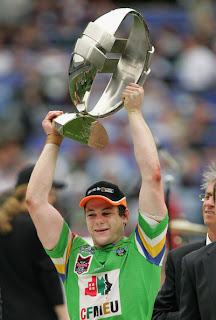 Significantly 14 of the 17 players named in the 2008 squad have played NRL football in 2009 and only Matthew Mundine and Daniel Harrison are yet to taste the top grade.

So the omens are good - make the Toyota Cup Team of the Year and there's some NRL football in your future.

The 17 man squad for the 2009 Team of the Year includes a number of players with NRL experience this year and at least one of them will be playing Finals Football in the NRL instead of the NYC this year.

Kieran Foran looks like he'll be part of the Sea Eagles charge in the Finals as long as Jamie Lyon is injured, while Jared Waerea-Hargreaves, Joel Romelo, Trent Merrin and possibly Jesse Bromwich could find themselves on the bench for the Sea Eagles, Panthers, Dragons and Storm respectively if injuries strike.

Minor Premiers Manly-Warringah and St.George-Illawarra were the best represented teams with four players in the lineup, Melbourne, South Sydney and Canberra had two each, and Penrith, Wests Tigers and the Warriors had one.

The Toyota Cup Player of the Year will be announced at the Dally M Awards next week with Dragons halfback Beau Henry the hot favourite. The full team is...

Daly Cherry-Evans - Manly-Warringah Sea Eagles
Of the 2009 Toyota Cup Team of the Year - 8 of the 17 have played NRL football this year.

The Finals for the Toyota Cup look decided with the 8th placed Canberra Raiders holding a significant differential advantage over the 9th placed Cowboys - with Nth Qld needing to win by at least 50+ against the Roosters and then rely on the Raiders to losing to Brisbane by at least 30.

With half of the NRL's teams no longer playing at the completion of Round 26, interest in the Toyota Cup will spike for the Finals Series - especially for fans of the Tigers, Warriors, Rabbitohs and Raiders.

The favourites look to be the Dragons and Sea Eagles but don't count out the Raiders if some of their players currently turning out in the NRL are eligible for the Toyota Cup Finals or the Melbourne Storm.
By W D Nicolson