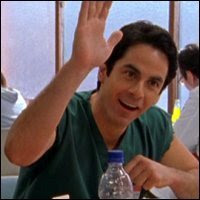 About to watch the very last episode of Scrubs (it is a two part finale) and I have mixed emotions. On the one hand I know I've been given such a great show to enjoy with a brilliant cast of characters that genuinely made me laugh (you can't find that easily on television - and personally I really find setup laughter like the stuff you find on How I Met Your Mother and Friends - really overplayed on tv. Don't get me wrong they CAN be funny but the same formula over and over again to make me laugh - ain't gonna float my boat. Sure you might argue Scrubs is like that too in the sense that it caters to my sense of humour all the time but hey - who said my sense of humour is that easy to appeal to?). Anyhoo.... on the other hand I'm disappointed that in the space of a few months two shows that I love - Boston Legal and now Scrubs - are finishing up for good - and being back to back losses it conjures up bad memories of how my favourite ever show - Ed - has still yet to technically finish its run on Australian television. 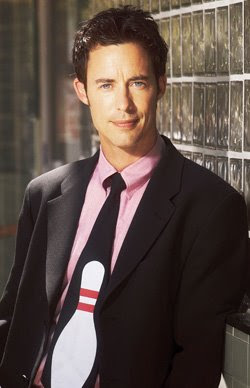 Ed was never marketed well - esp here in Australia - sure it had a lot of the 'feel good USA' to it but it was entertaining and engaging television - which is barely seen these days. * And no ladies it is not about Edward Cullen.

Channel Ten here in Australia has never shown the end of Season 3 or any of Season 4 - yet had the insolence to show promos for the final season in the leadup to Summer in 2004/2005 wondering aloud if Ed was going to 'get the girl?' Well if you - like me - was keen on watching it finish on normal television (other means were explored to get the whole series - big thanks to a friend in the States) - then you've missed out deluxe because I can't see a future on Channel Ten with Ed in it at all. Given its been 5 years since Ed's run in the USA ended and us poor folks in Australia still haven't seen the end of it - I can't see Channel Ten finally coming around to the novel idea of - well showing the end of the show. It aired on the W Channel on Foxtel a few years back but not in its entirety (just seasons 1 & 2 I think - maybe part of the 3rd - as I think it can't show them all due to the FTA rights Ten still hold in terms of premiering the series... I dunno its some mumbo jumbo that leaves the fans of the show in limbo) and hasn't been on TV at all for at least the last 18-20 months. Poor form all round. But the good news sports fans is that a DVD may - and I stress MAY - be out by the end of 2009 if not 2010... there were music rights issues that held it up (and apathy from NBC putting it together no doubt - ala Channel Ten) but they are being negotiated and an 'Ed' DVD Set may - again MAY - be in our future... I just wonder if it will come out in... May. But back to Scrubs - and the final episode of Season 8 which I am about to watch. Yes that's eight glorious years (well seven and a bit given the writer's strike of 2007/2008 nearly killed the show) of funny tv and it's about the end. So in reverence to the great 'The Todd' and the show: Give me a... "END OF SCRUBS HIGH FIVE!" 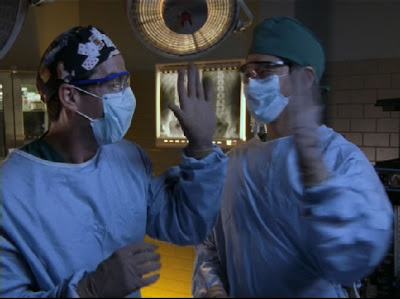 Probably my all time favourite 'The Todd High Five' In surgery The Todd asks for a... "Sterile High Five" Gold... spun gold with an old fashioned knitting wheel thingo. Life without Scrubs sadly will be a little sterile...