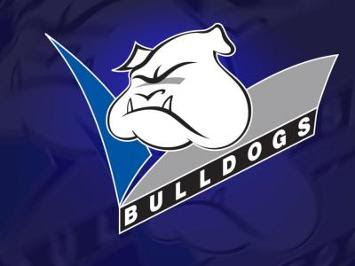 Bulldogs Blow Up Deluxe Over Call...

In case you missed any Rugby League related program, newspaper or internet site over the past few days, you will know that the Bulldogs are blowing up deluxe over a video refereeing decision that they believe cost them victory in their Friday Night Football clash with the St.George-Illawarra Dragons at WIN Jubilee Oval.

The incident happened in the final minute of play when Bulldogs fullback Luke Patten took an off-load from winger Bryson Goodwin and saw an opening in the Dragons defence from halfway.

He saw an opportunity to cut left into a gap that was created by poor positioning from Dragons five-eighth Jamie Soward and Patten raced into the clear drew the last line of defence and sent Jamal Idris into score.

However the gap in question had opened up behind a Bulldogs player who was coming back on side after the Dragons clearing kick that Goodwin had fielded.

The player in question was Greg Eastwood - who I should clearly point out is completely free of fault in this incident - and he did nothing wrong bar begin moving back on side after the kick. He made no obvious movements to impede any Dragons player and even when contact was made with Soward - he did absolutely nothing deliberate to prevent Soward from getting to Patten.

The line Patten ran in behind Eastwood is the issue that people seem to be conveniently missing when they blow up over Video Referee Steven Clark's decision of 'No Try'.

If Patten had run a straight line through the gap Soward had created by rushing up - then the try would've been awarded with barely any hesitation by Clark. But the key point here is that Patten ran a line that angled his body behind Eastwood and thus HE (not Eastwood) created the shepherd/obstruction that prevented Soward from making a genuine play on the ball carrier.

That's not to say that Soward would've tackled Patten - but the proximity of the shepherd that Patten created out of the passive Eastwood - meant that for mine - Clark had no option but to penalise Patten for his choice of running line.

Soward played the situation well - he hadn't been himself all match since a Michael Ennis cheap-shot after he had made a break left the Dragons playmaker dazed and without a running game for the rest of the night - and did enough to suggest that his ability to get to Patten had been affected by the presence of Eastwood and the Patten line.

It is a penalty. Correct call.

Now that's the incident but not the main focus of this article.

The issue that has led me to write this review is the constant whinging and whining of Bulldogs coach Kevin Moore and CEO Todd Greenberg - both who have done a great job getting the Bulldogs back on track - but are playing a huge hand of double standards in regards to Clark.

They are calling for an example to be made of Clark - that he be stood down (if not sacked entirely) because he has - in their belief - cost them 2 competition points and impacted their chances at winning the Minor Premiership. 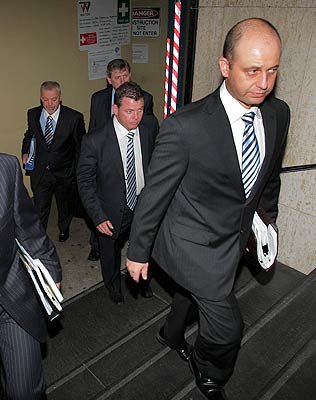 Now the double standards that I speak of are in regards to their Round 2 'win' over the Panthers in which it was proven that they had 14 players on the field when their scored the match winning try in the final minutes.

On that occasion Andrew Ryan had re-entered the field after having just been interchanged at the request of the Bulldogs trainer who had a brain explosion of his own as he attended to an injured Michael Ennis.

For some reason Ryan - who has played in the NRL long enough to know the interchange rules back to front - ran back onto the field without interchanging with a player or going through the NRL's interchange official and joined the attacking line which within that very set of six - marched down the field and scored the winning try to Ben Roberts and beat the Panthers.

An NRL investigation has stripped the Bulldogs of those two points for cheating but now when another human error takes place - the Bulldogs are campaigning heavily for the head of Steven Clark.

By the reasoning that Moore and Greenberg are showing - they can call for Clark to be sacked for his error - yet the trainer in question Tony Ayoub fronted up for work the next day and that's fine.

Let me get this straight - Clark's decision has cost the Bulldogs the Minor Premiership so he needs to be sacked to send a message - and Ayoub costs the Bulldogs two points they gained via cheating and there's no mention of the guy losing his job or even being stood down for a week.

I understand the Bulldogs are upset over the decision - while I believe the right call was made I can totally see why they feel like they had won the game and they'll be dirty forever more towards Clark.

Now in saying that I firmly believe they are right to stand by Ayoub and let him keep his job - but they need to understand that NRL Referees Boss Robert Finch is totally in the right for the same reasons - by standing by a veteran official like Steven Clark.

And another thing - are the NRL, the Bulldogs or the Dragons going to take any action towards the fans on the Kogarah hill who threw objects onto the field when the decision was made?

In light of how we heard all week about how players are responsible for their actions - no matter if what they think they are doing is ok - how can the same parties that call for the players to pull their heads in and own up for their actions - let a very dangerous incident like the missile throwing go unpunished or without investigation?

Or are we sending the message that just because you are frustrated with something you can do whatever you like and throw objects at people who aren't even at fault - and I'm talking about the ball boys, camera men, on-field officials and security guards around the edge of the ground - if that's the case we've obviously learnt nothing from the last week.