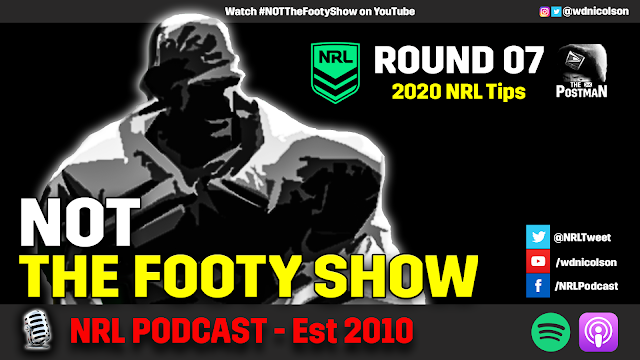 6/8 and the tipping percentage climbs ever so slightly - that's 23/32 since the NRL resumed and you'll take that won't you?

Swung and missed on Penrith (was a week early tipping them to peak) and Canberra were woeful (Manly were superb).

You can get NOT The Footy Show's Round 7 Tips in Video form below - the video will start at the tips themselves.

Round 7 Tips:
Thursday
Panthers over Rabbitohs
Souths have beaten up two poor teams back to back, whereas Penrith should have beaten Parra and then were excellent to beat Melbourne. Penrith it is.

Friday
Storm over Warriors
The Warriors sacked Stephen Kearney but the Storm have played ordinary footy for the most part since the resumption - expecting Craig Bellamy to demand a bounce back here. Storm.
Roosters over Dragons
The Saints shouldn't get within 10 let alone 30 of the Chooks at the moment but if James Tedesco doesn't play... Easts by 28.

Saturday
Knights over Cowboys
Jason Taumalolo can't do it all... and he'll have to for North Queensland to put up a fight against a well drilled and skilled in key areas Newcastle Knights team. Knights.
Broncos over Titans
Actually really want to tip the Titans as they may play the freer of the football with no pressure on them and a mountain of it on Supercoach Seibold. Brisbane get the tip but this is not a slam dunk.
Eels over Raiders
You just can't pick Canberra after last week's debacle v Manly. Parra fell short v Easts but played the far better footy. Tip Canberra if you want but it's hopeful. Eels.

Sunday
Sea Eagles over Sharks
Manly are being hammered by injuries (Tommy Trbojevic and Dylan Walker join the list) but keep fronting up... the same can't be said about Cronulla so far this year. So go with Manly, but if you want an outsider this weekend take the Sharks.

Tigers over Bulldogs
Was the 1st Half last week a mirage from the Wests Tigers? You know what you'll get from Canterbury - effort without much result on the scoreboard. Kieran Foran is playing great footy but you should pick the Tigers.