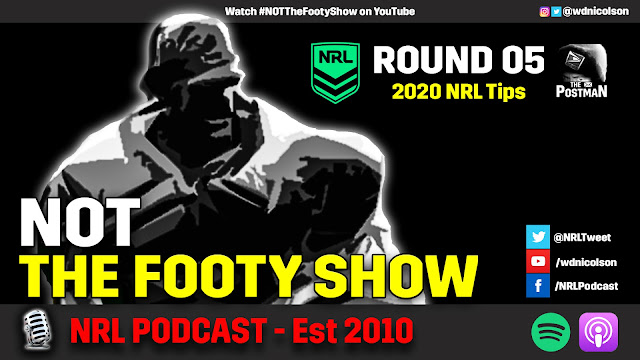 Well Round 4 started beautifully... coasting to 5 correct tips from 5 games... then the Knights, Titans and Bulldogs crushed the dreams of el perfecto.

To end up with 5/8 in Round 5 wasn't horrible on the surface but when you start 5/5 all you can think about is how useless the teams that let you down are for the next week.

Round 5 Tips:
Thursday
Sea Eagles over Broncos
Manly should win this... not in a canter but you just can't tip Brisbane after their effort last week against the Chooks - no matter how good Easts were - you have to tip Manly and you can't tip the Broncos.

Friday
Cowboys over Warriors
This tip rests solely on Jason Taumalolo's fitness at game time. If he plays we stick with the Cowboys on the road, if he doesn't then the Warriors will be getting tipped... as crazy as that sounds. So watch this space.
Panthers over Eels
Not in love with Parra despite their 4-0 start... and Penrith should have the same record if not for letting the Knights steal a point in Round 3. Nathan Cleary back is big and the Penrith forward pack will more than match Parra's group. Looking forward to the #9 matchup - gut feel is Koroisau might take advantage of the Eels around the middle. Tip Penrith at the moment.

Saturday
Rabbitohs over Titans
South Sydney get Cody Walker back and although the Titans broke through for their first win in 12 months last week - expecting Souths to put on a bit of a clinic at Bankwest.
Storm over Knights
Very very nervous picking Melbourne given how well Newcastle went in disposing of Canberra... another tip that might get reversed closer to kick-off... Melbourne aren't going that well and Souths didn't test their defence like Canberra did the week before... Newcastle have some points in them but how they defend - can they back it up three straight weeks? - decides this game. Storm on respect alone at this stage.
Raiders over Tigers
Can't understand the Benji Marshall disposal by Michael Maguire... Josh Reynolds offers something different but not something better. Canberra to win but this could be a seesawing contest as the Raiders weren't much good at all last week... Green Machine it is.

Sharks over Dragons
The Dragons will wake up at some point... but Mary McGregor needs it to be on the next two consecutive weekends to save his job (they have the Titans in Round 6 then Easts and Canberra back to back). Cronulla did the job in Townsville but weren't overly impressive - but you are extremely brave if you go against them here given the way Saints are playing right now.