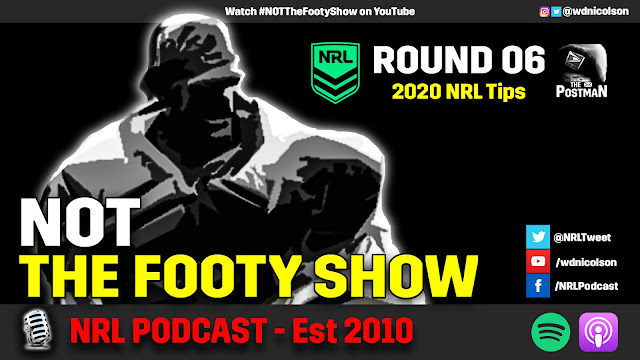 That keeps the tipping percentage at 62.5% for the season (25/40) with time running out to stay within striking distance of the tipping holy grail of 70% for the season.
Watch NOT The Footy Show on Youtube or listen to the Podcast via iTunes and Spotify.

Round 6 Tips:
Thursday
Knights over Broncos
Form says Newcastle... so stick with the Knights.

Friday
Rabbitohs over Warriors
The Bunnies beat up ordinary teams then struggle against the better ones - the Warriors are not one of the better ones.
Storm over Panthers
Should've stuck with the favoured Eels last week... went Penrith and got burnt. Just like they did blowing a 10-0 lead. As a result the tip is Melbourne... but feel free to back the Mountain Men if you dare.

Saturday
Dragons over Titans
St George Illawarra certainly aren't 'back' but the Titans are below average and Saints can be average to half decent on their day.
Tigers over Cowboys
The Tigers played boring footy and lost... the Cowboys played bad footy and let in almost 40 to lost to the offensively-challenged Warriors. Go Tigers.
Roosters over Eels
If you've watched Easts since the resumption there's no doubt which team is playing the better footy over this time. And Parra are playing very well but the Chooks are better than everyone by a mile.

Sunday
Raiders over Sea Eagles
Manly are down on a few key troops and Canberra are only missing one player from their best team (John Bateman). Go the Raiders here but overly respect Manly if you must.

Sharks over Bulldogs
Simply have no preference... they were both bad last week - Cronulla more so than Canterbury but you will go with the Sharks eventually so stop pretending you'll pick the Bulldogs already.