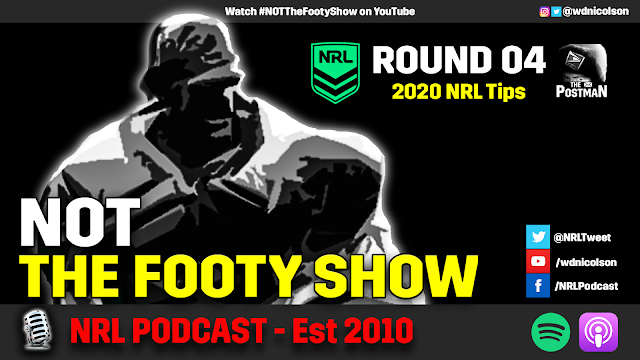 Watch out The Postman is back baby!

7/8 in Round 4 (well technically 6.5 under the old tipping points system given there was a draw) and the tipping season is back on track for 2020.

This week The Postman revealed his Tips on NOT The Footy Show Episode 214 but he's regurgitated them below.

To the tips in text form!

Round 4 Tips:
Thursday
Roosters over Broncos
Easts looked back in business last week as they handled the Bunnies, whilst Brisbane couldn't find a counter-punch for Parra's possession dominance. Roosters by quite a few by full time.

Friday
Panthers over Warriors
Penrith should have taken two competition points in Round 3 but were probably lucky to get one given the roll of the dice that golden point is... but you'd expect them to play more footy this week - against a team in the Warriors who won their first game of the season over Saints. Don't read too much into the value of completions here... just pick Penrith and be rewarded.
Storm over Rabbitohs
South Sydney need to rebound here - especially Adam Reynolds - after being overwhelmed by the Chooks, whilst the Storm had enough quality ball to beat 13 other teams in the NRL last week but got done by Canberra. Melbourne should bounce back but the Bunnies aren't going to be easy-beats here.

Saturday
Eels over Sea Eagles
Want to pick Manly... because the Eels aren't the bees knees yet despite their 3-0 record. May well change the pick here come Saturday arvo and Manly look pretty fit. Parra still don't have Nathan Brown and that's a loss... really tough to stick with Parra based on the above but as of right now - the Eels get the penciled in pick.
Sharks over Cowboys
No Jason Taumalolo is big... yeah it's big. No Michael Morgan wasn't felt against the inferior Titans but it will be against a Cronulla team that will be fired up after falling away badly in the second half last week. Shaun Johnson to have a big game if the Cronulla pack can handle McGuire and McLean. Sharkies is the tip despite being winless so far.

Sunday
Raiders over Knights
Canberra were really good beating Melbourne. The Knights were really gutsy earning a point v Penrith. Newcastle will need every minute between games to recover... but Canberra are a better side even with Ponga back, go the Raiders here.
Tigers over Titans
The Tigers want to play Finals this year - so if they can't dispatch the Titans on Sunday night they don't deserve to finish any higher than 9th... again.

Monday
Dragons over Bulldogs
Tossed the coin 50 times and it came up with the Dragons 26 times. What a contest!