NRL ROUND 24 TIPPING PREVIEW
By W D Nicolson
Follow @NRLTweet
Here's an incredible piece of scoopage from www.wdnicolson.com - I bought fuel at the same petrol station as Des Hasler this evening... wow.

And considering I've been playing Erasure's 'A little respect' on the Podcast for two weeks in a mocking gesture of how Des wants people not to respect his Bulldogs - that's huge news!

Put it on the front page of the Telegraph tomorrow!

Then make sure you throw it out right away... who buys the Tele anymore? Honestly?

Anyway to the footy and Round 24.

The premiership credentials of a couple of current pretenders get a firm test this weekend when the Tigers visit the Dogs, the Broncos host the Storm and the Sharks face the Rabbitohs.

All three are 'in' the Top 8 but they need big scalps pronto to give them any sort of confidence of winning more than one game when the Finals start.

The other two teams still in contention for a playoff spot - Canberra and Newcastle, simply have to beat the Roosters and Sea Eagles respectively to stay in the hunt.

But in truth neither have a sniff it seems even if they make it to the dance.

There's more on the playoff race and plenty of footy talk on this week's NOT The Footy Show Podcast.

| To Round 24 and NOT The Footy Show delivers plenty of talking points.
Can we hand Barba the Dally M/#NRLTweetPOTY double already? Hindy suspended! Do you have to lose to win? And we have our full Round 24 Preview and the genuine current Premiership market from our resident bookie.

| My 'Locks' are Warriors, Sea Eagles and Raiders; My 'Less than Confidents' are Cowboys, Storm and Rabbitohs, while My 'Don't put the house on Its' are the Titans and Bulldogs.

Good luck with that.


All the panel's picks are below with their Special Fried Rice selections - which is our lock of the week but we can't choose the same team.

NRL ROUND 24 PREVIEW - 2012
16/08 Odds are courtesy of Sportingbet Australia
For some more insight into the markets check out NOT The Footy Show's resident betting maestro's site GT Tips http://www.gttips.co.uk
All Kick-Offs are LOCAL time.

Round 24 Late Mail...
If you have any reputable mail - Let me know via @NRLTweet
BULLDOGS $1.45 v $2.85 TIGERS (+6.5)
Sam Kasiano and James Graham will return, with Joel Romelo and Martin Taupau likely to miss out as a result. The Tigers will choose between Tim Simona and Ben Murdoch-Masila (if fit) for their final bench spot.
| Want to pick the Tigers, will stick with the Dogs for your tipping needs only... Tigers capable though in current state.
BRONCOS (+4.0) $2.40 v $1.60 STORM
Corey Parker reckons he'll play but the mail was strong last week he wanted to as well... and didn't. Expect him to try and play but if you are a fantasy leaguer - don't expect his normal output, but he'll give it a crack regardless. Matt Gillett or Ben Te'o will move to the bench and Brendon Gibb misses out. The Storm could have a whole bunch of changes out wide and up front. Do not be shocked if Matt Duffie comes in on the wing returning from injury after he was named in the NSW Cup. Dane Nielsen could replace Justin O'Neill (leg) and both Jaiman Lowe and surprisingly Sika Manu are reportedly under pressure from Rory Kostjasyn for a spot in the 17.
| Broncos will give it a red hot go but the Storm should win as they try to secure home final and 2nd spot.
RAIDERS $1.45 v $2.85 ROOSTERS (+6.5)
Canberra will be 1-17 with Jarrad Kennedy 18th man. The Roosters have a coach called Brian Smith so don't be surprised if there's a whole bunch of late positional changes but probably not from outside the 18 man squad named on Tuesday.
| Canberra can't do anything in September but if they don't win this they won't even get a chance to prove me wrong.
SHARKS (+6.0) $2.70 v $1.48 RABBITOHS
Ben Pomeroy is not going to play and Wade Graham won't either. Nathan Gardner is also yet to be cleared, so the Sharks will be 1-17 with only Tyson Frizell a chance of forcing his way in if Anthony Tupou's hamstring has any complications before kick-off. The Rabbits get Greg Inglis back and will leavue Ben Lowe or Jason Clark out for Roy Asotasi.
| Cronulla can make the Top 8 with a win... but they won't and the Rabbitohs can't afford the loss given Manly's form.
WARRIORS $1.33 v $3.45 PANTHERS (+9.5)
Simon Mannering is training so he's a good chance - though the Warriors can't make the Top 8 so he may not be rushed back. Once again the Warriors may reshuffle their pack and their bench before kick-off. The Panthers should be 1-15 then 21. Though Travis Robinson and David Simmons are likely to swap positions, Danny Galea is ruled out and Adam 'Cotton' Docker/s is in on the bench. Don't worry I haven't heard of him either, but that's a great Seinfeld inspired nickname right there.
| Warriors in a game that sees 50+ points scored...
TITANS $1.48 v $2.72 EELS (+6.0)
Ashley Harrison, Greg Bird and William Zillman will all be game time decisions and Nate Myles will play injured regardless. If the trio are out... good luck Titans. The Eels will be 1-16 with Taniela Lasalo or Pat O'Hanlon the 18th man.
| Eels will play attacking footy but if the Titans defend, the Eels won't. Titans if Harrison and Bird play.
SEA EAGLES $1.38 v $3.15 KNIGHTS (+8.0)
Manly are set to get Jason King and Steven Matai back from injury with the long break since their last game giving them the time they needed to recover. Dean Whare and Tim Robinson will miss out. The Knights have Joel Edwards as 18th man and either he or Zane Tetevano will have that role on game day.
| Manly have a smell about them... they could win this by 20 if the Knights think they're going better than they are..
DRAGONS (+4.0) $2.40 v $1.60 COWBOYS
Matt Cooper should play and Beau Scott will make a late bid to play given the Monday game. Josh Miller or Jack Stockwell would make way for Scott. Ray Thompson is unlikely, with Anthony Mitchell joining the bench for the Cowboys.
| Quite a 'who cares' game for MNF but the Cowboys have more riding on this result and need to win... get it? Riding.... 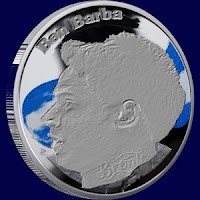 Can we really crown Ben Barba with the Player of the Year Award already?
NOT The Footy Show Episode 120 delivers Warrick Nicolson, Maria Tsialis, Matthew Duncan, George Taylor and Eyes talking the merits of handing Ben Barba the Dally M/NRLTweet Player of the Year double with 3 rounds left, Who did Hasler blame for Canterbury's win this week? Of the 5 teams left vying for 3 playoff spots - can any of them win the thing? What does Hindy have to do to get suspended? and GT declares the genuine Premiership market entering Round 24.
And as always we give you a full odds preview of Round 24 with all our picks and Special Fried Rice selections. NOT The Footy Show 53 minutes footy filled goodness at no extra charge.

LIKE the show on Facebook for all the latest updates.
NOT The Footy Show will release another Podcast next Wednesday night - August 22 with our Round 25 Preview.

LW: 5/8 | SEASON 89.5/168
Eyes does not eat Special Fried Rice... yet.
Make sure you enter NOT The Footy Show's Tipping Competition, the outright winner walks away with an Official Steeden Match ball!