NRL ROUND 22 TIPPING PREVIEW
By W D Nicolson
Follow @NRLTweet
The Top 8 is no clearer than it was last week and for more talk on what we've learnt (if we learnt anything ) just listen to this week's NOT The Footy Show Podcast.

Basically if the Knights and Titans lose they label themselves pretenders in terms of doing anything in the Finals should they make it, while the winner of the Cowboys/Sea Eagles game probably finishes in a Top 4 spot.

The other game of some interest is the Warriors v Sharks - if the Warriors win they are some hope at September, but if the Sharks lose - then a lot of teams below them are a huge chance of making the Top 8.

| To Round 22 - and NOT The Footy Show has your NRL Podcast needs covered in Episode 118: The Round 22 Preview - with a record breaking 4 member panel show featuring Maria Tsialis, Jake Hauritz, DC Chapman and Warrick Nicolson in the studio to preview the Run to the Finals - which teams did we settle on making the Top 8?
Grab the 57 minute Podcast right here.

| My 'Locks' are Melbourne; My 'Less than Confidents' are Warriors, Tigers, Broncos and Bulldogs, while My 'Don't put the house on Its' are the Titans, Sea Eagles and Roosters.

Another dud round to pick.

NRL ROUND 22 PREVIEW - 2012
02/08 Odds are courtesy of Sportingbet Australia
For some more insight into the markets check out NOT The Footy Show's resident betting maestro's site GT Tips http://www.gttips.co.uk
All Kick-Offs are LOCAL time.

Round 22 Late Mail...
If you have any reputable mail - Let me know via @NRLTweet
ROOSTERS (+5.5) $2.50 v $1.55 DRAGONS
If Lama Tasi is over a shoulder injury then Brad Takairangi misses out for Easts. The Dragons will make Jamie Soward earn his spot back in the top grade through the Illawarra NSW Cup team, while Nathan Green will start at centre. Will Matthews looks to hold his spot on the bench with Leeson Ah Mau and Jake Marketo to miss out.
| Roosters for whatever reason, mainly because they played with no fear last week... yes they lost but the Dragons are back in the Top 8 hunt - they'll clam up.
STORM $1.26 v $4.00 PANTHERS (+10.5)
Justin O'Neill could be a late inclusion and Matt Duffie isn't far off but don't expect any changes to the backline this week... then again. Richie Fa'aoso, Todd Lowrie and Jaiman Lowe will fight it out for the final bench spot. Penrith won't get Luke Lewis back anytime soon, while Danny Galea will be 18th man.
| Melbourne by four hundred... can't tip the Panthers here, Storm on a losing streak or not.
KNIGHTS (+5.5) $2.47 v $1.56 BULLDOGS
The Knights will be 1-17, while the Dogs are likely to start Dale Finucane or Martin Taupau at prop again with James Graham or Aiden Tolman going to the bench for the opening 15 minutes. Harlan Alaalatoa misses out.
| Newcastle every chance but the Dogs aren't exactly struggling on their way to the pole position for the minor premiership true?
COWBOYS $1.77 v $2.10 SEA EAGLES (+2.0)
Brett Stewart will play barring any last minute soreness in his hamstring and Anthony Watmough is free to play after the NRL wisely let him off a chicken wing charge that would've rubbed half the competition out over the last month of the regular season. Jason King remains in serious doubt due to a chest injury and either Vic Mauro or Daniel Harrison will join the bench. The Cowboys think Ashley Graham isn't far off while Ray Thompson will come in for Michael Morgan if 100% fit. It'd be nice to see Jason Taumalolo elevated for a game like this but Neil Henry doesn't seem sold on the youngster for whatever reason...
| Manly are at a cross-roads - got out of jail v Warriors and need a big road win to announce themselves, exactly what the Cowboys didn't do in Sydney last weekend.
WARRIORS $1.55 v $2.50 SHARKS (+5.5)
Paul Gallen plays unless he snaps in half between now and Sunday. Todd Carney is likely to play through an abdominal strain but how fit he is is the question... Jon Green and Sam Tagataese will miss out while it wouldn't shock anyone if Chad Townsend travels with the team as cover for Carney. The Warriors would be within their rights to bring Simon Mannering back early due to the importance of the game, with Sebastine Ikahihifo going back to the bench. Konrad Hurrell is next to no chance.
| Neither team can really do anything if they make the Top 8 but the Warriors are at home so let's go with them.
RAIDERS (+2.5) $2.20 v $1.70 BRONCOS
Corey Parker should play, despite not being named and Jack Reed will join him in the lineup on Monday after training strongly on Thursday. Dale Copley is probably another week away. Expect Alex Glenn or Ben Te'o to move back into the pack and Aaron Whitchurch and Dunamis Lui to miss out. Canberra have hand injuries a-go-go (Papalii, Earl and Ferguson) and Josh Dugan's ribs are sore but expect everyone to play.
| Canberra suck, Brisbane suck - but who sucks less? Brisbane maybe.
TITANS (+3.5) $2.25 v $1.66 RABBITOHS
Ashley Harrison will play and Nate Myles will play through a sternum injury as long as he can endure the pain. Greg Bird's hamstring strain is likely to keep him out. The Bunnies should have Sam Burgess but he remains hampered by a minor hammy strain suffered last weekend. Souths will take Scott Geddes as cover but he might miss out entirely with Roy Asotasi set to travel to the Gold Coast and is likely to play.
| Titans are back on the tipping map, so really I've gotta tip them right? Real reason is Souths will miss Inglis and Luke this week more than they did last weekend.
TIGERS $1.62 v $2.35 EELS (+4.0)
Tim Moltzen will need the long turnaround for his hamstring to be right to go and Keith Galloway will play through pain in his shoulder to keep the Tigers in the race for the Top 8. Tim Simona could find himself out of the 17 if Moltzen plays, while for the Eels - they will be 1-17 with Justin Horo remaining 18th man.
| Tigers please... you just can't overlook what's at stake here, even if the Eels are playing good footy. 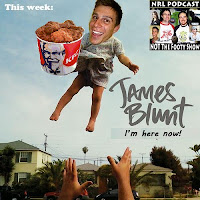 James Blunt drops by with a box of chicken wings.
On this week's NOT The Footy Show Episode 118: Matt Duncan and Nic McInerney join Warrick Nicolson to discuss Watmough's Chicken Wing Fiasco (he was exonerated surprise surprise!), Blunty's Top 5 Footy Moments since Origin, Gasnier's legendary status and Eyes wants Hindy's shorts!
And as always we give you a full odds preview of Round 22 with all our picks (and GT's!) and Special Fried Rice selections.
NOT The Footy Show 56 minutes that inform, entertain and drain you of the will to live.

NOT The Footy Show Episode 118
Round 22 NRL Preview - Released Wednesday August 1, 2012
Right Click Save Target As This Link if you don't have iTunes for the MP3 File.
(It's not 227 mins long - only 56 we promise)
Subscribe to the Podcast via this link / Download mp3 version

LIKE the show on Facebook for all the latest updates.
NOT The Footy Show will release another Podcast next Wednesday night - August 8 with our Round 22 Preview.

LW: 4/8 | SEASON 79.5/152
Eyes does not eat Special Fried Rice... yet.
Make sure you enter NOT The Footy Show's Tipping Competition, the outright winner walks away with an Official Steeden Match ball!