NRL ROUND 20 TIPPING PREVIEW
By W D Nicolson
Follow @NRLTweet
Well we have 'allegedly' our first coach falling by the wayside of 2012 everyone in Parramatta's Stephen Kearney and while the timing makes very little sense (it's not like Brad Arthur and Chris Anderson are going to get the Eels to the Finals for crying out loud) it does bring up a sobering thought...

Just how badly treated was Daniel Anderson two years ago?

He took the Eels to the 2009 Grand Final by letting Jarryd Hayne play his natural game, then missed the Finals the next year due to Hayne's groin injury as much as anything else. Then the club decided to bring in Kearney from the coaching staff at the Storm and let Feleti Mateo and Krisnan Inu follow Anderson out the door... and they wonder - 2 years later - why they are in the NRL cellar?

It was bad enough watching Kearney trying to implement the Storm structure devoid of the 3 superstars (well 4 given Greg Inglis was on that team for a long time under Craig Bellamy) that are needed for the grinding discipline approach to be capitalised on when the game is there to be won.

Kearney had Hayne and... who?

He might have signed Chris Sandow and Ben Roberts to be his 2012 halves but in that Storm structure they were never going to fit as they are instinctive players - not disciplined players and Matthew Keating is not going to be confused with Cameron Smith at any point in reality or dreams.

Yes, it is actually possible that Stephen Kearney may end his first grade coaching career having never reached double figures for wins...

To Round 20 - and NOT The Footy Show has your NRL Podcast needs covered with plenty on Manly v Canterbury, NRL Rivalries, the Minor Premiership race, and all our picks for this weekend in our 52 minute Podcast - grab it here.

Be sure to check all the Tuesday Team news on the NRL Injured List which is updated every Tuesday afternoon - and the Podcast has plenty of insight on those selections and your Late Mail and Panel Picks are below.

My 'Locks' are Melbourne, Brisbane and the Warriors; My 'Less than Confidents' are Manly, Souths and Sharks, while My 'Don't put the house on Its' are the Roosters and Tigers.

NRL ROUND 20 PREVIEW - 2012
19/07 Odds are courtesy of Sportingbet Australia
For some more insight into the markets check out NOT The Footy Show's new resident tipster's site GT Tips http://www.gttips.co.uk
All Kick-Offs are LOCAL time.

Round 20 Late Mail...
If you have any reputable mail - Let me know via @NRLTweet
SEA EAGLES $1.70 v $2.20 BULLDOGS (+2.5)
Glenn Stewart is apparently ready to play, so Daniel Harrison is likely to be pushed to the bench or out of the squad entirely. Brett Stewart could be a late inclusion but don't hold your breath Manly fans. Steve Matai will return from the flu. The Dogs got Sam Kasiano cleared from his tackle on FuiFui MoiMoi that left the Parramatta prop 'Kasianoed', and Martin Taupau will remain 18th man.
(+6.0) TITANS $2.67 v $1.50 BRONCOS
Ashley Harrison (toe) will not play, so Matt White (or Luke O'Dwyer) could start and Luke Douglas would shift into the second row. Aidan Sezer wants to play but his wrist injury isn't going to make things comfortable if he does. Brisbane should be 1-17 although Dunamis Lui could make a late appearance on the bench at the expense of Mitchell Dodds.
WARRIORS $1.28 v $3.85 KNIGHTS (+10.0)
The Warriors will get Konrad Hurrell back, with Steve Rapira likely to beat Omar Slaimankhel for the final bench spot. Newcastle expect to have Marvin Filipo as 18th man with Neville Costigan seemingly ready to make a return from an arm injury.
(+13.5) EELS $5.15 v $1.18 STORM
The Eels have been putting Jarryd Hayne through some agility drills this week but have maintained he won't be back til next weekend at the earliest, but with a new coach - who knows? Taulima Tautai or Mitchell Allgood would miss out on a bench spot if Ben Roberts holds his. Is this the week Cooper Cronk gets his promised rest from Craig Bellamy? Seems as good a time as any to do it for Melbourne... if they weren't in a slump right now. Dane Nielsen should return from an arm injury, while Ben Hampton shapes as Cronk's possible replacement if rested.
RABBITOHS $1.60 v $2.40 DRAGONS (+4.5)
Greg Inglis and Adam Reynolds expect to play despite knee and ankle injuries, while Nathan Peats is the new #9 with Issac Luke suspended. Dave Tyrrell or Ben Lowe will join the bench, unless Michael Maguire goes for a utility player on the bench to spell Peats. The Dragons will not have Nathan Fien (knee), while Jake Marketo, Jack de Belin or Josh Miller could miss out if Cameron King is picked to replace Fien. Jamie Soward should play.
SHARKS $1.45 v $2.80 RAIDERS (+6.5)
Paul Gallen will probably be given another week off, while Jeremy Smith is a chance to return from a knee injury. Wade Graham has shaken off a sternum injury and will play. Jon Green is set to be 18th man. The Raiders want Josh Dugan to get through another training session before considering him, and any member of the three-quarter line not named Blake Ferguson could make way if Dugan returns at fullback. If he goes into the halves, there might be a chance Josh McCrone goes to hooker and Travis Waddell misses out... but that might be being optimistic and Sam Williams is dropped instead. Dane Tilse is not expected back but don't completely rule it out.
PANTHERS $1.80 v $2.05 ROOSTERS (+1.5)
Luke Lewis will play despite a neck injury, but Michael Gordon is still not in the mix... or is he? Brad Tighe or Dave Simmons would make way if Flash returns. Matt Robinson or Mitch Achurch miss out for Penrith. The Roosters will give Lama Tasi until Sunday to prove he's over a shoulder complaint, while Daniel Mortimer could still find his way onto the bench for Nafe Seluini.
COWBOYS $1.67 v $2.25 TIGERS (+3.5)
The Cowboys bench has been settled with Scott Bolton beating out Cory Paterson for the finals spot, while Ray Thompson is a long shot to play. The Tigers will leave Ray Cashmere to play NSW Cup, so Joel Reddy and Junior Moors are likely to play. Gareth Ellis is a definite starter. 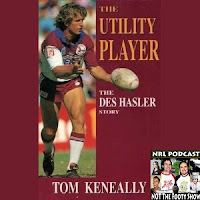 Who is Des Hasler?


At least one NOT The Footy Show expert has no idea.
Get NOT The Footy Show Episode 116 and hear Warrick Nicolson, Maria Tsialis, George Taylor and Eyes as they talk Manly v Canterbury, the Best Rivalries in the NRL (or are there any?), Best Game or Best Ending - Yes there's a difference, rethink the Minor Premiership race and we give you the Best Bets of Round 20.
We also reveal the NRLTweet Player of the Year Award Table - who has joined Billy Slater at the top of the votes?
Plus a full odds preview of Round 20 with all our picks and Special Fried Rice selections.
NOT The Footy Show 52 minutes of Footy... what else do you need?

LIKE the show on Facebook for all the latest updates.
NOT The Footy Show will release another Podcast next Wednesday night - July 25 with our Round 21 Preview and 'Run to the Finals' Special.

LW: 6/8 | SEASON 70.5/136
Eyes does not eat Special Fried Rice... yet.
Make sure you enter NOT The Footy Show's Tipping Competition, the outright winner walks away with an Official Steeden Match ball!