NRL ROUND 19 TIPPING PREVIEW
By W D Nicolson
Follow @NRLTweet
With just eight rounds to go - so we are more than 2/3rds of the way through the season people - the Finals Race is getting very interesting. And to think that about 7 days ago people were rather prematurely declaring that the current Top 8 entering Round 18 would not change at all.

NOT The Footy Show has your NRL Rookie of the Year Special and our Round 19 Preview is in the same 71 minute Podcast - grab it here.

Unless there are any objections the Preview will remain in this streamlined form for the rest of 2012 you can get all the Tuesday Team news on the NRL Injured List which is updated every Tuesday afternoon - and besides, the Podcast has plenty of insight and your Late Mail and Picks are below.

My 'Locks' are Bulldogs, Melbourne, Sea Eagles and Rabbitohs, My 'Less than Confidents' are Brisbane and the Tigers, while My 'Don't put the house on Its' are the Raiders and Sharks.


For some more insight into the markets check out NOT The Footy Show's new resident tipster's site GT Tips http://www.gttips.co.uk
All Kick-Offs are LOCAL time.

Round 19 Late Mail... If you have any reputable mail - Let me know via @NRLTweet
Bulldogs $1.13 v $6.35 Eels
The Dogs will choose between Corey Payne, Josh Jackson and Dale Finucane for their final two bench spots, while Parramatta won't have Matt Keating who is out for the rest of the year and Nathan Smith is expected to deputise for the second straight week. Jarryd Hayne is not expected to play. There is some late mail that Jake Mullaney has the flu and could be replaced by Cheyse Blair with Luke Burt shifting to fullback.
Broncos $1.50 v $2.67 Warriors
Brisbane have confirmed that Dunamis Lui will be 18th man and Mitchell Dodds gets the final spot on the bench. Konrad Hurrell is believed to still be in New Zealand, so don't count on him playing, while Sebastine Ikahihifo or Steve Rapira will be 18th man. Manu Vatuvei is good to go.
Knights $3.15 v $1.38 Sea Eagles
Newcastle have lost Neville Costigan and Robbie Rachow comes in for the only change for the Knights, while Manly won't have Brett Stewart and Glenn Stewart is a game time decision (but unlikely). Daniel Harrison would come in at lock, while Dean Whare is the fullback. Vic Maruo will be 18th man unless there are any late changes in the forwards and Michael Oldfield is the man most likely to be on standby for Jorge Taufua if the named winger's quad isn't 100%.
Storm $1.53 v $2.57 Cowboys
Cooper Cronk might (we stress might) rest this week as his coach says he will have a game off sooner rather than later but given the Storm will have a full week between games - he probably plays this weekend. Billy Slater likely won't be brought back til Round 20. The Cowboys might come up with any number of combinations for their final bench - and Ray Thompson's shoulder is still a concern so Michael Morgan may make the final squad.
Tigers $1.24 v $4.25 Panthers
Adam Blair misses with suspension and Gareth Ellis is considered not quite ready (though he might still play) to replace him. So expect Matthew Bell to start in the backrow. Joel Reddy is the standby player for Tim Moltzen who has missed time with a hamstring strain. Robbie Farah will play. Penrith will decide between Matt Robinson or Dayne Weston for their final bench spot, while Luke Walsh, Sam McKendry and Josh Mansour should all play. The only question is whether Michael Gordon is a late addition for Brad Tighe or David Simmons.
Raiders $1.53 v $2.57 Titans
Canberra will decide between Sam Mataora and Mark Nicholls for their final bench spot, while Josh Dugan won't be back til likely next round. The Titans have doubts over Nate Myles and Luke Bailey (now expected to play) with Ryan James on standby to come in for whoever doesn't play. James might even play at the expense of Luke O'Dwyer or Beau Falloon if Bailey and Myles play. Matthew White is also in doubt with a head issue.
Dragons $1.62 v $2.35 Sharks
Josh Miller will likely miss for the Dragons, while Ben Creagh and Beau Scott are ready to go. Mark Taufua or Jon Green probably miss out for the Sharks, with Anthony Tupou and Tyson Frizell likely to be favoured for bench spots. Jayson Bukuya is a good chance of playing after missing last weekend with an ankle injury. Cronulla are hoping Isaac Gordon and Colin Best have recovered from the flu in time. Jeremy Smith and Paul Gallen were ruled out by Cronulla on Thursday afternoon... allegedly.
Roosters $3.25 v $1.36 Rabbitohs
Braith Anasta plays game 250 at home, while Jared Waerea-Hargreaves is suspended for a week. If another forward isn't brought in, Mitchell Aubusson could go into the lock position and Frank-Paul Nuuausala to prop. Adam Henry, Daniel Tupou or Roger Tuivasa-Sheck could be in line for a start on the wing if Brian Smith moves Aubusson to the pack. Souths will choose between George Burgess, Ben Lowe and Dave Tyrrell for their final bench spot, while Sam and Luke Burgess will play. 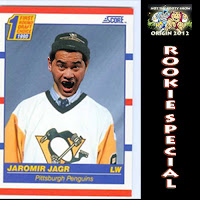 The NRL Rookie of the Year is?
Get NOT The Footy Show Episode 115 and find out who Maria Tsialis, Matthew Duncan, Jake Hauritz and Warrick Nicolson select as their NRL Rookie of the Year and most importantly, which 2012 Rookie will emerge as the best player long term?
The three favourites for the 2012 Rookie of the Year are:
Adam Reynolds from Souths, Konrad Hurrell from the Warriors and Aidan Sezer from the Titans.
We also discuss the various theories surrounding Luke Lewis leaving Penrith, talk to George Rose from Manly about his 100th game, try to explain how the NRL arrives at their picks for 'Rivalry Round' and also list the 2012 All-Rookie Team.
Plus a full odds preview of Round 19 with all our picks and Special Fried Rice selections.
NOT The Footy Show will also be having Maria in the studio as co-host in the not too distant future - can't wait for that. In the meantime enjoy your 71 minute dose of NRL Podcast goodness.

NOT The Footy Show Episode 115
Rookie of the Year Special and Round 19 NRL Preview - Released Wednesday July 11, 2012

LIKE the show on Facebook for all the latest updates.
NOT The Footy Show will release another Podcast next Wednesday night - July 18 with our Round 20 Preview show.

LW: 4.5/6 | SEASON 64.5/128
Eyes does not eat Special Fried Rice... yet.
Make sure you enter NOT The Footy Show's Tipping Competition, the outright winner walks away with an Official Steeden Match ball!